10. The Ugly Side of College Football

The fall is a time when people gather around the television or load up tailgating equipment to go see their favorite team play. There’s food, family, friends and cheers for the home team — boos for the visitors. But sometimes these happy times get ugly.

This year’s Iron Bowl had one of the greatest finishes to a football game in history when Auburn’s Chris Davis ran back a missed field goal attempt for a touchdown with no time left on the clock. The touchdown gave Auburn a win over cross-state rival Alabama 34-28. Auburn fans stormed the field and Alabama fans hung their heads in disbelief. Yes, a little trash talking was appropriate in this context — it goes with any rivalry this strong. That’s where it all should end. Fans should be supportive of the ENTIRE team no matter the outcome.

That didn’t happen though. Cade Foster, Alabama’s place kicker, missed three field goal attempts in the game and the “Bama fans” (People who claim to be Alabama fans but only know the words Roll Tide, The Bear and the name of the player they believe cost them a game) took it personally. Foster has received death threats and had homophobic slurs directed at him since Saturday night. Most of us would agree that this level of hatred directed at this college student, or anyone for that matter — is absolutely disgusting. The Auburn loss shouldn’t have been blamed entirely on this young man trying his best to win a game.

Fans that pin an entire game’s outcome on one player don’t know anything about playing sports and probably never played themselves. Losing is a team effort. Cade Foster didn’t lose the game for Alabama. The team, Nick Saban and the coaching staff collectively lost the game. When Auburn scored to tie the game at 28, there were blown assignments by the secondary. Had the Tide defense not allowed almost 300 yards rushing, Alabama probably would have won the game — but that’s the nature of all competitions. You win some, you lose some.

If Nick Saban just has his quarterback take a knee, instead of kicking a near 60-yard field goal, the game goes into overtime and Alabama may have won.

But no, so many ignorant people want a reason to hate somebody. They want to point a finger at one person and blame the pain they feel on him or her. Anyone with any football sense, or sports or business experience,  knows it’s NEVER just one person’s fault for a loss. The criticism that Cade Foster has received from “Bama fans” is nothing short of classless.

Here are a few of the “PG” rated tweets that were sent to Cade Foster on Twitter.

This isn’t just a problem at Alabama though. Back in 2003, Ole Miss fans displayed  a similar reaction after the LSU game in which the Rebels lost 17-14. Jonathan Nichols, that season’s Lou Groza Award winner, missed two field goals and Ole Miss fans will forever blame the loss on him. And it’s absolutely ludicrous to dislike Nichols. Ole Miss fans who accurately recall that season know that Nichols had just as much to do with Ole Miss’ success that season as Eli Manning did. 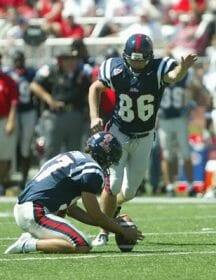 In the opening game against Vanderbilt, Nichols hit two 50+ yard field goals to give Ole Miss a three point win. Then he kicked several field goals against Florida in The Swamp that got the Rebels a victory in that hostile environment. Then he single handedly beat Arkansas by kicking four field goals to get Ole Miss the 19-7 win over the Razorbacks.

But again, people don’t want to think about that. They only want to remember the two field goals he missed in the LSU game. Nobody remembers the ref calling Chris Collins out of bounds on a would-be long touchdown catch when he was clearly still inbounds. Nobody remembers Eli Manning falling on fourth down assuring our defeat. They just remember Nichols’ two missed field goals. And again, people who blame him for that loss don’t know anything about the game.

One more example is Boise State kicker Kyle Brotzman, who missed two short field goals in their loss to the Nevada Wolf Pack in 2010. Boise State was looking at becoming the first non-BCS conference school to play for a national championship if they were able to go undefeated that season. Those dreams were shattered that night however when they lost in overtime 34-31.

After the game, Brotzman received threats from some clueless fans and the blame was unfairly placed on his shoulders. It’s a sad fact of the game but there are always going to be fans that are stupid enough to want to make threats or physically harm a kid because he’s the one everyone is pointing fingers at.

Is it OK to be upset? Absolutely. But there is a fine line between being upset and being so hot headed that you make stupid threats towards players. Ole Miss fans everywhere are upset right now after the Egg Bowl loss. And there are some idiots who are blaming Bo Wallace for the loss on Saturday. A game isn’t won or lost by one person. It’s a collective effort. Ask any coach. You win as a team and you lose as a team.

Boise State’s head football coach Chris Peterson said it best after they lost their game to Nevada in 2010.

“One play can win a game but one play can’t lose it. There’s a lot of plays to be made that we didn’t make for whatever reason.”

THAT is what true fans of a school need to keep in mind whenever their team suffers a close loss.

Let us know what you think in the comment section