38. What’s Next For Marshall Henderson?

Now that Rebel guard and SEC basketball bad boy Marshall Henderson has been suspended indefinitely from the Ole Miss basketball squad, Rebel fans are in a quandary about the future of the Hurst, Texas, senior who lit up the boards and the stands during the 2012-2013 season.

While Henderson has not responded directly to fans as he did in an open letter of apology he posted on olemisssports.com on April 3, he did go on Twitter today to chat with Chris Herron, the former Denver Nuggets and Boston Celtics point guard whose career was marred with several drug related incidents, including a charge of possession of heroin.

In June of 2009, Herron launched Hoop Dreams with Chris Herron, a company mentoring players both on an off the court. Sober since August 1, 2008, Herron has lectured widely, sharing his stories about drug use and how he overcame his addiction.

Herren responded with a Tweet back to Henderson, saying: 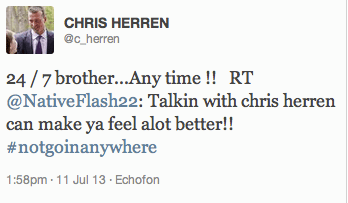 Stay Tuned to HottyToddy.com for the latest.