Christmas on Ice in Madison Is Coolest In South

This holiday season, Madison, Mississippi once again welcomes Christmas on Ice, an affair sponsored by Baptist Health Systems that boasts itself as “The Coolest Event in the South.”

Open from Nov. 16 through Jan. 5, Christmas on Ice includes a 14,400 square foot outdoor ice-skating rink, as well as a 125-foot ice slide to give Mississippians a rare chance for chilly excitement.

Parker King, a Madison native who is a freshman at Lindenwood University in Missouri, was sure to stop at Christmas on Ice with his friends when returned to Madison over Thanksgiving break.

“In Mississippi, I’ve only seen snow three times in my life, so when an ice rink comes to town, I mean you can’t pass it up,” King said.

For the less adventurous, Christmas on Ice offers nightly musical performances, primarily by local vocal groups, across from the rink on the Trustmark Stage. A majority of the free performances come courtesy of local churches and schools. The Christmas Story Trail, which tells the story of the first Christmas as recorded in the Gospel of Luke, is another bonus attraction.

The 2013 holiday season is Christmas on Ice’s second year in Madison, but nearly every aspect of the event has been expanded since its first. The rink is larger, the ice slide is now two-lane, and even the decorations are larger and designed to be more entertaining. A 40-foot tall light up Christmas tree is the most notable décor; it, along with several other lit trees, is synchronized to perform to music around the rink every night.

Madison native Jessica Pierce is one of several area teenagers who have found seasonal employment through Christmas on Ice.

“In my job I get to skate guard, making sure everyone is being safe on the ice and getting the on-site nurse if anyone is injured,” Pierce said.

Designated safety guards and an on-site nurse may be necessary for every ice rink, but they are perhaps especially necessary for an ice rink whose patrons are primarily in-experienced skaters.

The job is an exceptionally exciting opportunity for Pierce as she is a former competitive skater with a unique opportunity to get back on the ice.

“We occasionally skate after the rink closes and the skate guards all get to practice and have fun for a bit,” Pierce said. She added, however, that working on ice is very different than performing on ice.

Another collegiate on break, Ben Branson of Ole Miss, sees Christmas on Ice as a place to make memories, calling it the perfect place for a holiday picture. It is also a way he feels connected to his hometown.

“It’s a very packed place, I can even feel the body heat radiating off of people; it brings us together physically and spiritually,” Branson said.

For the locals, as well as visitors from all over the state, Christmas on Ice is becoming a tradition that bolsters the overall feel of the season.

A full list of nightly performances, up-to-date opening status, and directions to Christmas on Ice can be found at www.christmasonice.com or via the Facebook page “Christmas on Ice.” 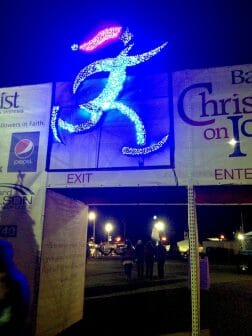 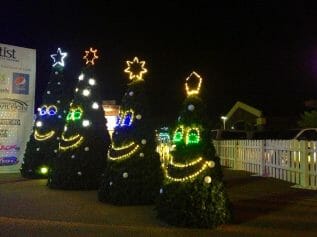 – Grace Sullivan is a student in the Meek School of Journalism and the self-proclaimed ice skating queen.