As Camp Shelby’s role as the National Guard’s largest mobilization center is winding down, its leaders are focusing now on a future in cyberspace and drones for the facility. 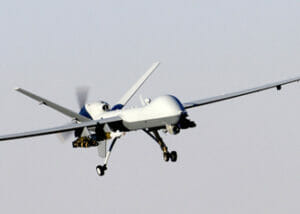 Camp Shelby will be in the center of a research project just getting under way that will bring together the Army, Navy, Air Force and Department of Homeland Security to figure out the most efficient use of open source software for their unmanned aircraft systems.

It’s quite a leap for the historic Forrest County facility. “Camp Shelby has been here for almost a century,” said Lt. Col. Rick Weaver, the operations officer. “We were built on tanks and Howitzers and now we’re looking at the realm of cyberspace and the UAS market.”

A study in July by the Government Accounting Office urging agencies with unmanned aerial vehicles to share their best practices using open source systems prompted the research effort. The government’s unmanned vehicles represent an industry valued at more than $8 billion.

Camp Shelby’s size, location, infrastructure and working relationships with various agencies as a Joint Forces Training Center were among the reasons it was selected for the program, Smith said.

The Open Source Software Institute, a trade group headed by Hattiesburg resident John Weathersby, is coordinating the program, which begins with a year long research phase.

The Defense Acquisition University, which teaches people how to navigate the Department of Defense’s purchasing process, will conduct the research program.

“We asked DAU as a neutral third party to come in and help answer questions the GAO report stated,” Weathersby said.

“Ultimately the goal is to have DAU clearly define what benefits the open software is to the government.”

He said participants from the Defense Department and Homeland Security are most interested in bottom line results from the software used in their different unmanned vehicles.

Weathersby founded the Washington-based trade association in 2000 to promote the adoption of open software with federal, state and local governments. “We have been working with all levels within the Department of Defense and with the Department of Homeland Security,” he said.

“Camp Shelby is one of the most unique facilities in the government because it is a certified unmanned vehicle flight center, the only one in the National Guard,” Weathersby said.

“They are being set up as a command and control structure for this research project and it will have participants from all over the world. The folks at Shelby will have the opportunity to see the big picture and be able to identify other opportunities. From the business side, the UAV is a huge commercial market that is pent up right now.”

The military marketplace is huge and Camp Shelby will be “a significant player in the market,” Weathersby said. “It’s one of the few places you can come to test unmanned systems and train. They’re already moving in that direction.”

Weaver said with the mobilization role winding down, “OSSI is a very good fit for us.” He said as the home for the unmanned flight facility that trains all National Guard soldiers, “having that school with the software side is a perfect fit for us.”

The facility is under construction but training of soldiers from all states and U.S. territories including some active duty soldiers has been under way.

“We’re building bench strength.” Said Weathersby, “This is one of several similar projects we’re planning on rolling out at Shelby over next year few years.

Weathersby said in along with the ongoing research, Camp Shelby will be recruiting commercial customers to use the military’s training facility for testing their unmanned vehicles and their pilots.

“We need to reach out and tell them this place is open for business,” he said.