Wine Tips: What's That Floating in My Glass?

Several things are known to float around in wine: small pieces of cork, tiny crystals, and clouds of dark substances, collectively called sediment. Several readers have asked what they are and whether they are harmful to win or health. 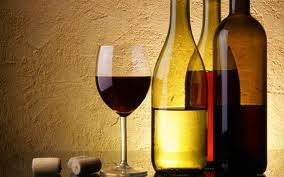 First of all, they are not harmful to health; they can be, on the other hand, injurious to the taste of wine, depending on which ones they are and their concentration.
Tartrate crystals. These shiny, little particles, usually the size of grains of sugar, occur naturally in wine. They precipitate from tartaric acid, the most prevalent natural acid in wine. Normally, they are removed before bottling by chilling them to make them stick to the sides of the tank before the wine is drawn off and bottled.
if you have bottles with tartrate crystals, you can remove them by chilling the bottle upside down. They will adhere to the cork and when you pull it, they disappear with it. Since they can be a bit acidic, this process is worthwhile if there are too many of them for your taste, but a few very fine ones won’t hurt anything.
Sediment. This is the name for solids floating in a wine bottle or sitting on the bottom. They are fine particles, if your lucky, of grape pulp, skin, yeast, and stems. If you are less lucky, leaves and bugs may be in question. Sediment is usually bitter upright for a couple days till it falls to the bottom, which it will,then carefully pour the wine out into a clean decanter. Lacking the decanter, any clear glass vessel will do.
Trying to lay bottles on their sides in those wine baskets or cradles seldom works as well. They tend to mix the sediment with the wine worse than the simpler stand-up method. If you have no time for standing it up, but what to drink it right away, the best way to filter wine is with a coffee filter. Even this is not fool proof; next best is a doubled paper towel.
Lees. Sediment found in a barrel before a wine is bottled is usually called “lees” in English and “lies” (pronounced the same way) in French. Lees are removed by filtering, or by fining, which is dropping a magnet-like substance into the barrel to attract floating solids. Egg whites are the traditional substance. After the fining agent pulls the solids together and to the bottom of the barrel, the tainted wine at the bottom is drawn off and only the “clean” wine remains. This process, called “racking” is often performed monthly for some of the denser wines.
Wine “sur lies”. Not all lees are bad. In Champagne, the wine is left on the lees to absorb the flavor and aroma of the yeast in the lees for several months. Muscadet, the great white seafood wine of western France, also uses this process, and even brags about it on labels. Lately American wineries, notably Callaway in California and Chateau Biltmore in North Carolina, are making chardonnays “on the lees” to enrich the flavors, then removing them before bottling.
Crust. One other sort of sediment is also sought after. Some dessert wines like Port and Setubal of Portugal often totally unfiltered throw such heavy sediment, that they totally encrust the insides of their bottles. If you want to drink them with out crust, you can shake them vigorously to loosen it, let it fall to the bottom, wait a day, then decant them. Or you can do it the old-fashioned way, doing the same shaking, set the bottle upside down for a few days to let the crust stick to the cork, then break the whole neck off the bottle with heated port tongs, a really colorful way to open a bottle.
Personally, I’ve always liked good port crust. Some think I’m crazy, but I like to let the sediment sink to the bottom, drink the wine, the slosh around the crusty, spicy sediment and spread it on the bottom. It is uniquely delicious. It’s not as crazy as it sounds. Really.
Written August 31, 1988
John Hailman of Oxford is a regular contributor to HottyToddy.com on two subjects: Law and Wine. Now retired from both his “day job” as a federal prosecutor in Oxford after 33 years and his “night job” of 25 years as a nationally syndicated daily columnist in more than 100 daily papers on wine, food and travel for Gannett News Service and the Washington Post, Hailman will cover both topics under the titles of The Legal Eagle and Wine Tips of the Week. HottyToddy.com will also run periodic excerpts from Hailman’s upcoming book of humorous legal stories, From Midnight to Guntown: True Crime Stories From A Federal Prosecutor in Mississippi. Hailman now teaches Federal Trial Practice and Law and Literature at the University of Mississippi.