Larry Speakes enjoyed a long and successful career as a Washington insider after graduating from the University of Mississippi
Larry Speakes, a native of Merigold, Mississippi, Press Secretary for President Ronald Reagan (1981 to 1987) and Ole Miss graduate, died early Friday morning, January 10 at his home in Cleveland, Mississippi.


Speakes began his long career in the newspaper business after graduating from the University of Mississippi. However, in 1959, he and friend Ed Meek co-founded a student photography business.
“I misspelled his name when I printed our business cards, which came out Speaks and Meek. I am not sure he ever forgave me for that typo,” said Meek, former Assistant Vice Chancellor and Associate Professor of Journalism at Ole Miss and publisher of Hottytoddy.com.
He served as editor of the Oxford (Mississippi) Eagle in 1961, and as managing editor of the Bolivar Commercial in Cleveland, Mississippi from 1962 to 1966. From 1966 to 1968 he worked as general manager and editor of Progress Publishers of Leland, Mississippi.
“Larry was an extraordinary Ole Miss journalist and dear friend.  He was one of my mentors gowning up in the newspaper business,” Meek said. “As students, we each worked for several newspapers and were given space and teletype access in the Lyceum Building at Ole Miss. We had unique access during the 1962 Ole Miss riots.”
In 1968, Speakes moved to Washington, D.C. and served as press secretary to Senator James Eastland of Mississippi. In this position, Speakes also worked as spokesman for the U.S. Senate Committee on the Judiciary. Speakes was also the head coordinator of the senator’s reelection campaign in 1972. In 1974, The White House called Speakes and asked him to serve as a Staff Assistant and soon he became the Press Secretary to the Special Counsel to the President at the height of the Watergate scandal. Upon President Nixon’s resignation, President Gerald Ford appointed Speakes to be Assistant Press Secretary to the President. Speakes also served as Bob Dole’s press secretary during his unsuccessful vice-presidential run with Ford.
After briefly serving as President Ford’s personal press secretary in 1977, Speakes moved into the private sector as vice president of the international public relations firm of Hill and Knowlton in Washington. During the 1980 presidential campaign, he worked on the staff of the Reagan-Bush team, helping to reorganize the press operation, eventually becoming deputy spokesman for the President-elect during the transition.
When President Reagan’s press secretary, James Brady was shot in the assassination attempt on the President, March 30, 1981 outside of the Washington Hilton Hotel, Brady was unable to return to work and though he retained the title of “Press Secretary” for the duration of Reagan’s term, in Brady’s absence, Speakes took over the job. 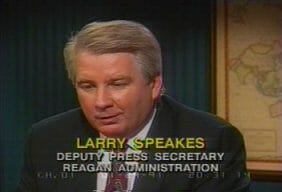 “When I visited with Larry in the White House, we were like two kids back in college; we were both so excited to be there. Once when President Reagan was out of the office, Larry invited me to sit in President Reagan’s chair in the Oval Office. I wouldn’t do that, but I did take Reagan’s seat in the cabinet room,” Meek remembered. “As I looked down, I saw three white buttons under the edge of the table in the cabinet room. I naturally though each would have a serious purpose, perhaps  ‘drop the bomb’ or something like that. Larry told me to look closely and they were labeled: ‘tea’, ‘coffee’ and ‘Fresca.'”
On June 17, 1981, Speakes was appointed “Deputy Assistant to the President and Deputy Press Secretary.”
On August 5, 1983, Speakes was appointed “Assistant to the President and Principal Deputy Press Secretary,” and remained in that post until January 1987 when he resigned and Marlin Fitzwater took over the role. Speakes then moved to New York and became a Vice President at Merrill Lynch. Speakes wrote a best seller book in the late 1980s, Speaking Out: The Reagan Presidency from Inside the White House.
On January 30, 1987, he was presented with the Presidential Citizens Medal by President Ronald Reagan. He returned to Washington in 1988 and held positions as Vice President of communications and public relations with Northern Telecom and also the U. S. Postal Service from which he retired in 2008.
As the spokesperson for President Reagan, Speakes traveled the world with the President. However, he always viewed Merigold and Bolivar County, Mississippi as his home.
“Larry, first and foremost, was a journalist. He brought great leadership and humor to the White House Press Corps.  He was a great Ole Miss alum, Mississippian and American,” Meek said.
A private service for Speakes has already been held.