OXFORD, MS –– Oxford Lafayette Sportsplex has announced its 2014 Schedule of Events, with 18 competitive youth soccer, baseball and softball tournaments beginning February 8 and ending October 26.
The inaugural season of the new, 73-acre, state-of-the-art sports complex opens with USFA softball tryouts February 1-2. Tryouts for players and teams in Divisions U8/U10/U12 take place February 1 at 2 p.m. Registration begins at 1:30.
The following day, on February 2, players and teams in U14/U16/U18 from throughout North Mississippi can try out beginning at 2 p.m. Registration begins at 1:30.
No fees or registration costs apply for either day of softball tryouts.
Season action begins at OLS on February 8, with the 3v3 Rebel Roundup Soccer Tournament. The girls and boys tournament is open to all soccer teams from U6-U18 and Adults.
Beginning March 1-2, the excitement of USSSA baseball comes to the Sportsplex with AAA/Major tournament action on Saturday and Sunday. The Turf Wars slugfest is the first of 8 tournaments on tap for spring, summer and fall in a lineup that continues the following weekend, March 8-9 with Spring Break Turf Blast. The USSSA tournament is open to all classes.
For a change of pace, USFA Softball begins at OLS on March 29-30, showcasing some of North Mississippi’s top teams and players in competitive fast pitch action throughout the weekend.
USSSA baseball tournaments return to OLS April 11-13 with the three-day thrill of the AAA/Major Oxford Spring Classic.
The following month, on May 16-18, the multi-sport complex will host The Rebel Cup. The tournament is open to all D-1 and D-2 teams, with a three game minimum per team.
USSSA baseball and USFA softball tournaments are set for the remainder of the spring, summer and fall. USSSA AAA/Major baseball competition returns to OLS May 16-18 with Oxford Playing on the Turf, followed by USFA Softball on May 23-25.
The June lineup at OLS opens with back to back baseball events, beginning with Oxford Turn in the Sun, a USAAA AA Only tournament set for June 6-8, and followed June 11-13 with USSSA All Star Major tournament action June 11-13, and USFA Softball June 20-22.
Two USFA Softball tournaments are set for August 8-10 and August 30-31, with the USSSA’s Oxford Summer Sizzle baseball event sandwiched between them August 16-17. The baseball event is open to all classes.
Three additional USFA softball tournaments and one baseball tourney round out the fall schedule. Softball tournaments are set for September 20-21, October 11-12 and October 25-26. The final baseball tournament at OLS takes place October 4-5 with USSSA’s Oxford Fall Classic, open to all classes.
For more information on baseball and softball events or to register, contact Tournament Director Greg Lewis at  662-816-9349 or p360northms@gmail.com.
For additional information on the 3v3 Rebel Roundup or Rebel Cup soccer tournaments, contact Jamie Perkins at 662-386-9739 or jamieperkins1974@gmail.com.
Beginning January 12, sign up for any OLS events online at www.oxfordlafayettesportsplex.com. 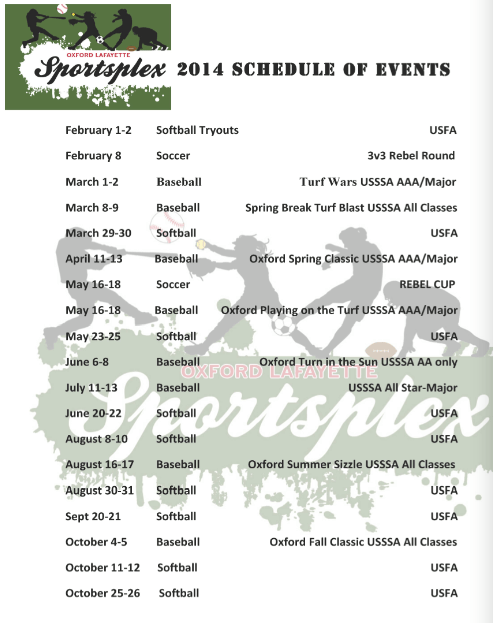