Stay indoors.  Protect pets and children and outdoor plants.
No, it’s not the polar vortex.  The Mississippi Legislature gaveled back in session last week. 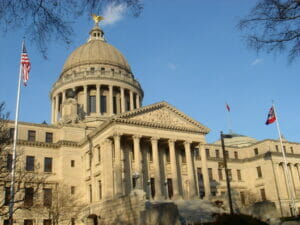 For the first time in several years, there is actually a little good news facing legislators as they convene in Jackson.  Mississippi’s tax revenues are running about $75 million ahead of projections so far this fiscal year.  The big fights from last year over charter schools and Medicaid expansion should be tempered somewhat.  Some of the ideas floating around the Capitol—reform of our criminal justice system, for example—have some bipartisan supporters.
2014 could be a good year to get some solid things done.  Hope springs eternal, at least.
There is one effort underway that deserves attention, though it may not get it.  During the 2013 Session, the Legislature established a task force to study and rewrite Mississippi’s election laws.  In the intervening year, the task force has set about doing just that.  The group is made up of circuit clerks, party executive committee members (who are charged by law with conducting primary elections), and others with experience under our current system.
In this Session, the task force aims to offer a comprehensive bill to modernize the way we vote.  They deserve great credit for that effort.
Mississippi’s Supreme Court has said that the “integrity of our government can be no greater than the integrity of elections which put our government officials in office.”  Too often in Mississippi, our elections have lacked integrity.  In last year’s municipal elections, there were several close races that ended up in court because of irregularities.  In Gulfport, Canton and Hattiesburg, I was involved in election contests that arose at least in part from gaps (and deliberately-exploited loopholes) in our laws.  Voters deserve better.
Mississippi’s election code was largely written when people marked paper ballots and slid those ballots into a ballot box.  Our code also arose during a time when Mississippi had only one party, and the Democratic primary determined the winners.  Reality has clearly changed, procedurally and politically.
As technology, including electronic voting machines and a statewide voter database, has advanced, our laws have fallen behind.  The result is an inconsistent hodgepodge of statutes and “clarifying” opinions issued by the Attorney General and the Secretary of State that nonetheless lack clarity for the folks who have to run elections in real time, as voters wait in line.
The task force aims to change that.  Their recommendations would improve our election rules and codify best practices.  Their proposed revisions would also eliminate duplication and contradictory code sections and modernize elections administration.
Many of the proposed revisions are technical, relating to “back office” procedures.  But those technicalities are important because they are aimed at ensuring the integrity of the ballot and the process.
Absentee voting laws are one area crying out for reform.  There are currently two sets of code sections dealing with absentee ballots, which may be the biggest source of abuse and fraud.  The code sections do not always mesh with each other.  The Supreme Court has repeatedly called our absentee ballot system “flawed.”  The task force aims to improve that system.
Likewise, the logistics of preparing ballots, safeguarding ballot boxes, and handling paper ballots (like absentee, affidavit, and emergency ballots) are often burdensome to election officials, and costly to the counties that foot the bill.  Illegal votes are counted; valid votes are not.
Most voters never see this side of the election process.  But it is important to reform the process so that it is smoother and more accurate.
The election contest process is also irrational and inconsistent.  There are different procedures for primary election contests (tried before a judge and the county election commission) and general election contests (tried by jury).  The court cases are outdated, or downright inconsistent.  Many questions are left unanswered.
The task force would greatly streamline the contest process and make it much more rational.  For candidates and their supporters, that would make a big difference.  Enduring a contest, even when fraud is involved, is truly an endurance contest borne largely by the candidate.
Yet, contests are one of the few ways that shenanigans are brought out into the open.  Because Mississippi has no recount provision, the only way to verify accurate results is through election contests.
Mississippi’s new voter ID law will help.  It should be implemented by the June 2014 primary.  As the Legislature gears up, I am hoping by the 2015 elections, the election task force’s comprehensive reforms are being implemented, too.
Cory T. Wilson is an elections law attorney with Heidelberg Steinberger Colmer & Burrow, P.A. Follow Cory on Twitter, @CoryWilsonMS, or email cory@corywilson.ms.