HISTORY OF BRUCE, MISSISSIPPI
Bruce became a town on Sept. 22, 1928, by the designation of Gov. Theo G. Bilbo. The population was 618. The land had been acquired by Roger W. Butterfield, manufacturer of fine furniture, Grand Rapids, Michigan, between 1880-1934.


Butterfield sold land and timber to Robert Bruce and Company on Nov. 14, 1924 for a mill. A railroad was built and used to transport the equipment for the mill and later to bring in logs, ship lumber, carry passengers, mail, payroll, freight and express.
Work on the mill started in 1927 and a whistle let the workers know when to get up, when to be at work, when it was lunchtime, when it was time to resume work and when it was quitting time. The whole town lived by the whistle. It is estimated to have blown 75,000 times.
The Board of Aldermen granted a 25-year water franchise to the E. L. Bruce Company, who provided water from its well until the 1950′s when an elevated tank was built. Another well was built in the 1960′s.
E. L. Bruce Co. was given a 25-year electric franchise by the town board in 1927. Pontotoc Electric Power Company paid $4,000 for this franchise to serve 200 members in 1936 and continues to serve this area today.
The town was surveyed and plotted by brothers Mark and C. G. Richardson and Bruce Company began to build houses for its employees, many of which still exist.
Several newspapers were published in the early years. In 1953 Mr. and Mrs. Sellers Denley and their son Gale, founded The Calhoun County Journal, a weekly newspaper, owned and operated today by Gale’s daughters and a son-in-law.
Also in the 50′s Mr. and Mrs. Harry Waller came from Kentucky, bought the telephone company and built a first-class system second to none.
Pay as you go street work started in 1969. A 22-acre park was built by the town, civic clubs and sports enthusiasts. It consisted of a swimming pool, lighted ball fields and a community building.
The Jesse Yancy Memorial Library was built in 1975, replacing a one room facility in the city hall.Yancy was a prominent local attorney, serving as a state senator, when he died at an early age.

DSL, formerly Glenn Slacks, a garment plant and Brookwood, a furniture-making operation, were important plants and jobs providers during the rapid growth period of Bruce in the 60′s.
Lumber manufacturer Weyerhaeuser came to Bruce in 1974 and continues to provide numerous direct and indirect employment for the area.
The above information is provided from a history written in 1977 by the late Mayor Q. T. Crowson, also a historian.
In 1982 William and Ann Morgan started and continue to operate a low- power television station W07BN.
Today Bruce has Haworth Manufacturing, a plant that produces ergonomic office chairs and provides considerable employment. They also have Columbia Gulf Transmission Co. Murphree Frame Supply, Old Town Truss Company and Helena Chemical Co., providing employment and services for numerous people.
The town has excellent law enforcement and fire protection, which continues to grow and improve. They also have several community fire departments.
Bruce has Yoda Creek Country Club and Golf Course, Bollinger Family Theatre, excellent schools, two supermarkets, other groceries, two banks, several restaurants and motels, also a bed and breakfast Cart Barn Inn and numerous successful retail stores. They have two doctors, a dentist, an optometrist, several attorneys, two pharmacies and two funeral homes.
Bowles Garage and Honda is the oldest business in town and is now being operated by Mitzi Bowles McCostlin, granddaughter of the founder. Bruce has a retirement and nursing home, formerly built as a hospital by the late Dr. O. B. Crocker.
The town has many active service clubs and an active chamber of commerce along with Baptist, Methodist, Catholic and Pentecostal churches. Internet service is provided by Bruce Telephone Company.
We have recently opened a Bruce Forestry Museum that was the original E. L. Bruce Company company store, which carried groceries, furniture and dry goods.
Farming is a viable force here, where sweet potatoes, soybeans, cotton and corn are grown. Lumber, however, remains our staple and our theme is “Bruce Where Money Grows in Trees,” developed by the late S. Gale Denley.

LOCAL CLUBS AND ORGANIZATIONS
Fine Arts Club of Bruce
Fine Arts Club of Bruce is a women’s organization dedicated to community improvement by enhancing the lives of others through volunteer service.  The club, organized and federated in 1938, is a member of the General Federation of Women’s Clubs and the Mississippi Federation of Women’s Clubs.  With a membership of 34 ladies ages 18 and up, the group conducts projects and programs in the areas of Arts, Conservation, Education, Home Life, International Outreach, and Public Issues.  Projects include co sponsoring, along with other local clubs, the annual Sawmill Festival, Fall Festival, and Spring Easter Egg Hunt, as well as holding its annual Spring Salad Luncheon fundraiser, club fundraisers for the local Daily Bread Food Pantry and the Bruce Forestry Museum, and a bi-annual Bruce Christmas Tour of Homes.  Current President is June Vaughn who can be contacted at 662-983-4019 or junevaughn@bruce telephone.com.
Bruce Fine Arts Juniorettes Club
In 2000, the Fine Arts Club organized the Bruce Fine Arts Juniorettes, a group of 25 high school girls in grades 10-12 at Bruce High School, Calhoun Academy, or locally home schooled.   These girls are dedicated volunteers in their schools and community whose motto is “Let us share a smile as we serve in our community.” Current Juniorette Advisor is Fine Arts Club member Sandra Pope who can be contacted at 983-7478.
Bruce Rotary Club
The Bruce Rotary Club was founded in 1945 under the umbrella of Rotary International.  The club is made up of business and professional men and women of the B ruce area. Membership is by invitation of a member who proposes the new member and is approved by the club. The Bruce Rotary Club is receptive to new members and welcomes inquiries of potential members.  Rotary is a service organization and the help it provides is both in the local community and worldwide.  The Bruce Rotary Club meets at lunch each Wednesday in the fellowship hall of First Baptist Church.  The Code of Ethics of Rotarians is expressed in the form of the 4-Way test. l. Is it true? 2. Is it fair? 3. Will it bring goodwill and better friendship? 4. Will it be beneficial to all concerned?
The Twentieth Century Club of Bruce
The Twentieth Century Club of Bruce was formed and federated in 1947.  Members of the General Federation of Women’s Club, Twentieth Century strives to create differences in our community as well our great state of Mississippi.  Meetings are held the third Monday of each month, September through June.  For more information contact Cassie Bryant at 662-414-9558.
Lions Club
Lions Club was founded in 1917 by businessman Melvin Jones.  Lions Club has always been dedicated to helping those less fortunate in their communities and around the world. The Lions Club is the World’s largest service club association with 1.3 million men and women members in more than 44, 600 clubs in  200 countries and geographic locations. Bruce Lions Club was founded in 1957.  Since then the members have followed the Lions Club motto, ‘WE SERVE”.  The Bruce Lions Club Recycles for  Sight by collecting Old Eye Glasses, Provides glasses to the needy, Supports the Sawmill Festival and the Bruce Lions Club Golf Tournament, White Cane Collection which supports the Mississippi Eye Bank, Bruce Forestry  Museum contributor,  Bruce Christmas Parade (2012 will be the 50th  Annual Parade), and urges Awareness of Diabetes.
Bruce Lions Club meets the 2nd and 4th Tuesday of each month at the Pizza Palace on the Bruce Square starting at 11:30 A.M. For membership information contact Jerry Janci at 662-412-2029.
THE BRUCE MUSEUM 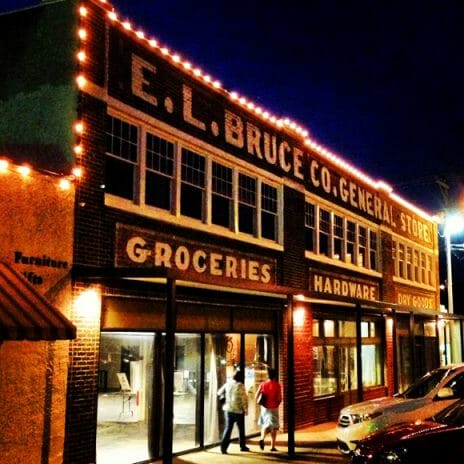 The Bruce Museum, located in the historic E.L. Bruce Company Store building on the Bruce square, captures the history of the area while also providing the ideal spot for any special occasion.
The museum houses displays that share the story of the early logging days in the area, early history of the town and works from some of our local artist.
In addition to the serving as the hub for local history and art, the museum also offers a huge meeting space that is available for rent by the public.
The museum has already hosted banquets, school dances, wedding receptions, birthday parties, local festivals and more.
For rental information email chamber@brucetelephone.com or call the Bruce Chamber of Commerce at 662.983.2222.
– History of Bruce, Mississippi; Bruce Chamber of Commerce
Facebook
Twitter
Pinterest
Previous article
Reforming Mississippi's Elections
Next article
Hollywood, Pols, Media Get Failing Grades From Persons With Disabilities