If Oxford was Mayberry, Park's would be Floyd's

January 17, 2014
0
488
If Oxford was Mayberry RFD, then Park’s Barber Shop would be Floyd’s. And under every little Lafayette County kid’s first hair cut is a mind in love with the father/son memories made there.
Saturday morning around the Square back then was an old black and white movie of a gathering to reaffirm the bonds between town and county. Just before sun up, double pots of hot coffee at Smitty’s steamed the wake up call down South Lamar’s sidewalk. After sun up, hardware merchants hustled in their back doors, in a race to be the first on the Square to open their front doors and wipe the sleep out of Oxford’s business eyes.
The early bird got the sneering rights. Newspaper-toting coffee clubbers made themselves known; on foot, coming down North Lamar and up South. John’s crew, back of the drug store, Ed and Howard’s bunch, Louise laughing with her close friends and customers, one in the same…this was Mayberry, this was Oxford.

And down the sidewalk, a block off the Square, at Park’s Barber Shop, there was Norman Rockwell’s Americana on display as Dennis Bullard snapped this shot of his son Jamie’s first hair cut. While Mr. Earnest Oliver works on another customer, Mr. Lois Henderson’s slight smile acknowledges the moment and young Jamie’s expression as an Oxford father and son right-of-passage. 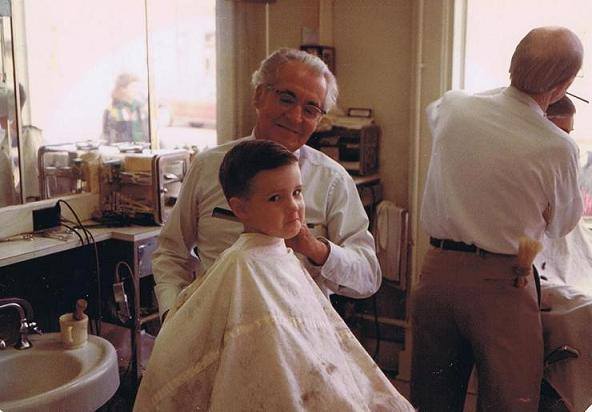