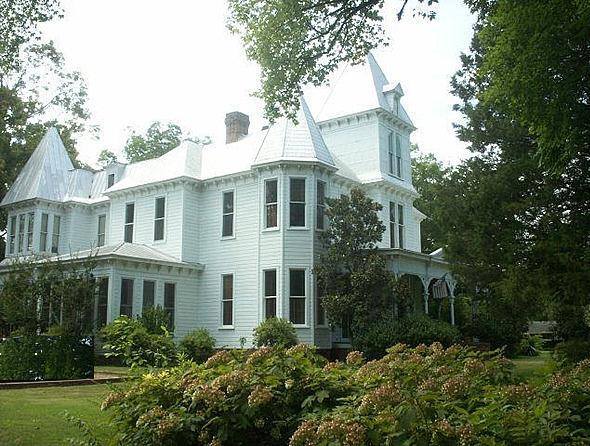 The home above is perhaps most commonly known as the Old Ethridge Home.
Judge Ethridge owned the home before selling it in the early 1950.
According to David Tatum, Ethridge family members Tommy and Billy Ethridge grew up there. Billy later became head of the Mississippi Supreme Court in Jackson and Tommy was a prominent attorney in Oxford.
“It was called the ‘Old Ethridge Home’ when we lived in it,” said Kathryn Smith. “This view is actually the back of the house and the front faces South Lamar. We lived in an apartment on the far left side in this picture! The Dan Watson’s lived below us. The house was not featured in Home From The Hills as was Fiddler’s Folly, along with Ammadelle where Mrs. Dorothy Tatum lives. We had a great neighborhood back then! Loved it!”
Another commentator adds further context. “My grandfather, Neil White, Sr., bought the home from the Ethridge family in the early 1950s,” said Neil White. “My family occupied it for about two years.”
When I was a little girl we called it The Lawrence Home,” said Judy Young. “It was made into four apartments and Janice and Cathy Coers lived in one of the apartments for a while before they built next door to me. Kathryn Smith lived in one of the apartments for a while and Robert and Margaret Khayat lived in one shortly after they married. A wonderful house and I am so thrilled they haven’t torn it down, like so many others. I have a lot of memories playing there, especially on the front porch.”
Courtesy of John Cofield with comments by John’s devoted readers. John is a HottyToddy.com writer and a noted folk historian of all things Oxford.