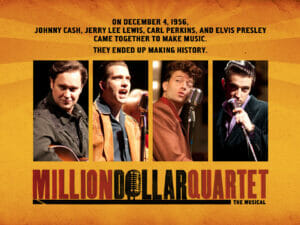 The Tony Award-winning Broadway musical, Million Dollar Quartet,is  inspired by the electrifying true story of the famed recording session that brought together rock ’n’ roll icons Elvis Presley, Johnny Cash, Jerry Lee Lewis and Carl Perkins for the first and only time. On December 4, 1956, these four young musicians were gathered together by Sam Phillips, the “Father of Rock ’n’ Roll,” at Sun Records in Memphis for what would be one of the greatest jam sessions of all time. Million Dollar Quartet brings that legendary night to life with an irresistible tale of broken promises, secrets, betrayal, humorous banter and celebrations, featuring timeless hits including “Blue Suede Shoes,” “Ring of Fire,” “That’s All Right,” “Sixteen Tons,” “Great Balls of Fire,” “I Walk the Line,” “Whole Lotta Shakin’ Goin’ On,” “See Ya Later, Alligator,” “Fever,” “Folsom Prison Blues,” “Hound Dog” and more.
John “JoJo” Hermann — February 12 at 7 p.m.


John “JoJo” Hermann was born in New York City then moved to Oxford, Mississippi after college. He began playing with the local band Beanland after a friend of the band heard him playing on an old upright piano at the Hoka also in Oxford. After extensive touring of the southeast with Beanland, he then went on to join Athens, Georgia-based Widespread Panic in 1992, with whom he still plays keyboard and organ. JoJo is known for his lead vocals on many New Orleans-style jazz and blues covers and originals along with soul moving gospel sounds coming from his organ. His has been heavily influenced by artists such as Professor Longhair, Junior Kimbrough, and Otha Turner among others. In recent years JoJo has particapated in several side projects most notably JoJo & His Mojo Mardi Gras Band.
The Claremont Trio — February 15 at 7 p.m. 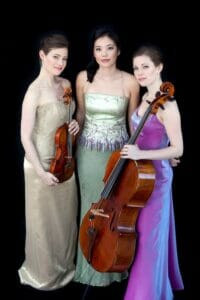 Lauded as “one of America’s finest young chamber groups” by Strad Magazine, the Claremont Trio is sought after for its thrillingly virtuosic and richly communicative performances. The first winners of the Kalichstein-Laredo-Robinson International Trio Award, the Claremonts are consistently praised for their “aesthetic maturity, interpretive depth and exuberance” (Palm Beach Daily News).
The Claremont Trio was formed in 1999 at the Juilliard School. Twin sisters Emily Bruskin, violin, and Julia Bruskin, cello, and pianist Andrea Lam are all based in New York City near their namesake Claremont Avenue.
Peking Acrobats — March 15 at 7 p.m.
Since their Western debut in 1986, the Peking Acrobats have redefined audience perceptions of Chinese acrobatics. They perform daring maneuvers atop a precarious pagoda of chairs; they are experts at trick-cycling, precision tumbling, somersaulting and gymnastics. They defy gravity with amazing displays of contortion, flexibility and control. They are masters of agility and grace. The troupe is often accompanied by live musicians skillfully playing traditional Chinese instruments and high-tech special effects that coalesce with the music and awe-inspiring feats to create an exuberant entertainment event featuring all the excitement and festive pageantry of a Chinese carnival.
For tickets or more information, visit the Ford Center website. 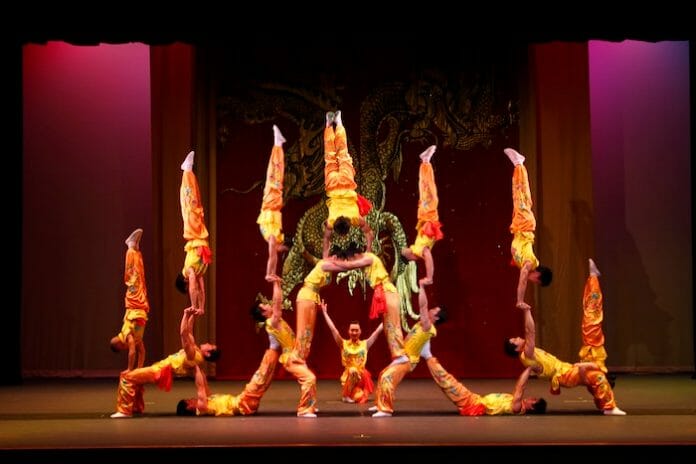