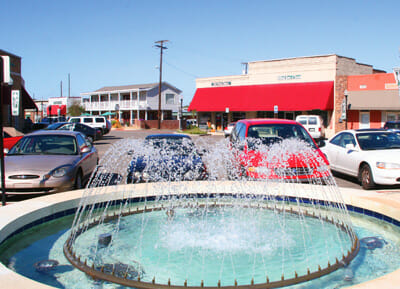 Originally called Watson’s Crossroad, Olive Branch was founded near where several old Chickasaw Indian Trails crossed.
When the first post office was established in 1846, Mrs. Frances Wilson Blocker – a descendant of one of the community’s founders – suggested the name Olive Branch.  She felt the new name symbolized a dove bringing a branch to the seagoing Noah.  On May 1, 1874, Olive Branch was incorporated as a town and on March 6, 1888, it progressed to Village Status.
Among the earliest settlers in the Olive Branch area were Stephen Flinn and his wife’s brother-in-law, Milton Blocker.  They purchased DeSoto County Sections 34 and 35 from Chickasaw Chief Lush-pum-tubby for $1,600.  Blocker was probably responsible for the village’s first business, a mule-powered cotton gin.  Later, a creamery and boat factory boosted the community’s economy, an indication of what was to come.
Emphasis on education began as early as 1836 with the establishment of the Rock Springs School located in a log cabin near the Pleasant Hill community. In 1911, DeSoto County Agricultural High School was established on land donated by Milton Blocker, Jr. and his daughters. At the dawn of the 20th century, Olive Branch began to emerge as a commercial center as well as an agricultural one, eventually eclipsing the thriving settlements of Pleasant Hill and Cockrum.

Modern Olive Branch boasts one of the most diverse economies in the nation, thanks to a wide variety of industrial and distribution employers.  The industrial revolution of Olive Branch began in 1971 when a site just a couple of miles from downtown was chosen as the home of Holiday Inn University and Conference Center.
Today the Whispering Woods Hotel & Conference Center is open to the public offering magnificent meeting facilities and a 200 unit hotel.
Holiday Inns opened an industrial park and airport in January 1973.  Today, the development is known as Metro Industrial Park, a fully planned, improved, and restricted industrial facility.  It includes the Olive Branch Airport, with a runway length of 6000 feet, high intensity runway lighting and fully staffed air traffic control tower, which is served by 3 instrument approaches. It can accommodate the largest corporate jets down to the smallest. It is one of Mississippi’s top five most active airports for landings and takeoffs.
In less than a century and a half, Olive Branch has gracefully made the transition from Indian Territory to the fastest growing city in the fastest growing county in Mississippi.  Located adjacent to the Mid-South’s leading metropolitan center – Memphis, Tennessee – Olive Branch offers the best of two worlds – pleasant, comfortable, uncongested living and employment all less than 30 minutes from the cultural, financial, and distribution center of the Mid-South.
Courtesy of https://www.olivebranchms.com/olive-branch/history.html