Charlie Adams is an Oxford native, graduate of Lafayette High School and a member of the Ole Miss Class of 1985. Adams is a journalist, author, and motivational speaker.
What’s the maddest you’ve ever been?
In October of 1988 I got madder than a wet hornet! I had just started as sports anchor at the CBS affiliate in South Bend.
# 4 Notre Dame had defeated #1 Miami on a Saturday and was projected to move to the top of the college football rankings the following Monday when the polls were released at 6:30 pm.
I did my sportscast live from the Notre Dame practice that evening. After doing the sports at 6:21 I was waiting for the news to end when a Notre Dame athletic official asked me if I would like to have coach Lou Holtz on live at the end of the newscast. Practice had ended and I think it was Notre Dame’s way of doing something nice for the new media guy in town. I had literally just started work there.
I was startled, but eagerly accepted. I immediately talked through my microphone to the producer back at the station.

“Drop the kicker,” I said, referring to the cute close of newscasts where they end with video of a new zoo animal or something peppy. “They are bringing Lou Holtz over now. I am going to ask him about moving to the top of the rankings.”
Here was the reply.
“No,” said the producer. “I have good video of a huge pumpkin in Iowa. We are going to run that.”
At first I didn’t believer her.
“DROP that!” We have the Notre Dame coach with the Irish about to go to #1 for the first time in years!”
“No…..,” she said, “I going with my pumpkin video.”
At that point Holtz arrived as the commercial break started to end at 6:28. He shook my hand as this was my first time to meet him. I had a stunned expression on my face as I could not believe her decision.
As the commercials ended, Holtz and I could both see what was going on with the newscast as there was a monitor near us. We both watched as the anchors closed out with the big pumpkin and ended the news. Holtz looked at me sort of funny, shook my hand, and left. I was burning up and gripped the microphone so tightly I probably dented the steel.
I was so mad that thank goodness it was a 10 minute drive from Notre Dame back to the station or I would be in my 25th year of a life sentence at the Terre Haute penitentiary. Thank goodness her shift ended at 6:30 and she was gone. We had a ‘talk’ the next day and it took me awhile, but I forgave her. What helped was she admitted she had made a mistake, and I moved forward.
On another occasion I was doing a live report via satellite from Indianapolis when the technical director of the newscast and my very good friend Rick Carter hit a wrong button during my report causing everything to go to black for a minute of the 2 minute report. That basically messed up an entire day’s work as the report looked awful. I was so bent out of shape about it that I didn’t speak to him for a week. I was so childish that when a bunch of us played our Tuesday morning basketball games, I refused to pass the ball to Rick even though he was on my team and was wide open at times in the game!
I finally forgave him and passed balls to him happily ever after in those Tuesday games.
Those things happened over 25 years ago and over time I have learned so much about forgiveness and moving forward. Rober Karen writes, “True forgiveness isn’t easy, but it transforms us significantly.”
Building and keeping a positive attitude means forgiving people who have often done far worse things than airing video of a big pumpkin when I had a live exclusive interview right there with a bigtime coach.
When we forgive we take away their power to hurt us. You set a prisoner free, which is you. It does not mean you are excusing and you don’t have to be friends, but you quit giving it energy.
Here are 3 tips for forgiveness.
1) Acknowledge your feelings. Let the person know they hurt you.
2) Tell them their words/actions were unacceptable.
3) Be prepared to accept an apology.
When I speak and work with organizations on attitude, I often come in with the approach of ‘compared to what?’ This winter has been hard? Compared to the Continental Army losing 2500 men to bitter cold during Valley Forge?
Challenges in your life? Compared to Dana Reeve who after years of caring for her paralyzed husband Christopher Reeve, got lung cancer and died at 44 even though she was a non smoker?
Having a hard time moving past something that was very hurtful to you? Compared to Saundra Adams?
In 1999 her daughter Cherica was carrying the child of Carolina Panthers player Rae Carruth. In a horrifying effort to prevent the birth and child support, Carruth hired two thugs to kill her and the unborn child. In a flurry of bullets into her car, they killed her but through a miracle the child was born ten weeks early.
However, seventy minutes went by from the time of the shooting to the emergency delivery. The lack of blood and oxygen to his brain in that time did significant damage. Chancellor Lee was born with cerebral palsy.
Saundra, his grandmother, raises him. 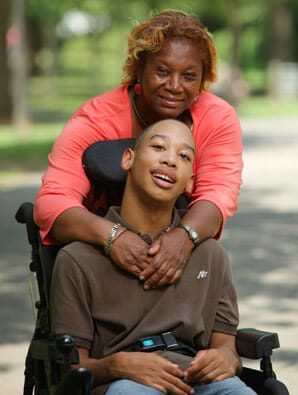 She has one of the most positive attitudes in the world. Writer Thomas Lake, in a masterful story he did on them for Sports Illustrated, explains that her attitude was developed from going to Mount Olive Baptist Church as a child.
“What she learned at Mount Olive was an overwhelming sense of gratitude for life. The sense that you don’t wake up unless God opens your eyes, don’t see the rising sun unless God pulls it from the horizon, don’t put food in your mouth unless God helps you hold the fork. And you do all these things and you rejoice.”
You can only imagine what it has been like for Saundra to cope with the feelings she has for Carruth, who had her daughter murdered. Despite the tremendous grief, her attitude has been remarkable.
“Like I say,” she explains in the article, “you can focus on what you’ve lost or what you have left. So I didn’t lose. I have my grandson. I have my daughter with me in my heart, always. I have her with me through this young man. So I don’t focus on loss. I mean, I think she’s in Heaven, with God, so that’s definitely not a loss. So I’ve got a lot left, and a lot of hope left and a lot to live for, and to be able to help my grandson to become the wonderful man he’s meant to be. I haven’t lost anything.”
“Really, I’ve gained. I’ve been pushed into my role and destiny.”
Lake quotes Saundra’s passionate remarks when the judge was deciding what sentence to mete out. Carruth “has not shown one single ounce of remorse, to me or anyone in my family, there’s not been one ‘I’m sorry about what happened to your daughter,'” she said. “But in my heart, because I’m a Christian, as an act of my will, and because I know it’s out of obedience to God, I am forgiving Rae Carruth.”
My goodness.
While you may be at work or in school now and not have the time, I encourage you to read Lake’s entire story as it is one of the best works of journalism in recent years.
click here for The Boy they couldn’t Kill
“Forgiveness is the fragrance the violet sheds on the heel that has crushed it.” – Mark Twain