The Mansion Was Grand Restaurant, Oxford Meeting Place Before 1967 Fire

For many years, Aubrey Seay managed the cafeteria at the University of Mississippi, establishing lifelong relationships with faculty and students alike.
Seay’s love of the university and the surrounding town of Oxford cemented his reputation before he evened open the doors on his famous restaurant, The Mansion.
For 25 years, The Mansion was the place be. With his grand Marble Room, Mr. Seay could welcome civic clubs, school dances and even the part of the press that was in town covering the integration of his dear Ole Miss in 1962.

Mr. Seay just never met anybody that he didn’t like and didn’t befriend from the football players, to William Faulkner, to the governor. Just everyone and anyone. Mr. Seay passed and The Mansion burned in 1967, but the memories of the man and his restaurant remain.
Annette Seay Hines, Aubrey’s daughter, recalls her father’s passing:
“My father passed away just weeks before the restaurant burned. Or maybe a month or two. My sister has a wonderful letter that was written by Jack Cofield, who had a very nice photography studio in Oxford. And it’s really a wonderful letter about how it actually was befitting that Daddy should go before the restaurant. So there were just a lot of special people that really had a special relationship with our parents.
William Faulkner and his wife Estelle used to eat in The Mansion regularly, and he didn’t like the jukebox. We had a jukebox in there because the students loved the music.
And when Daddy would see Mr. Faulkner come in, he would unplug the jukebox and put an “Out of Order” sign on it. I remember waiting on Mr. Faulkner several times and he used to sit in the third booth on the right side of the restaurant and face the front. Mr. Faulkner’s favorite meal at The Mansion was the barbecued chicken and peach cobbler, and sometimes he would order the cobbler before his meal.” 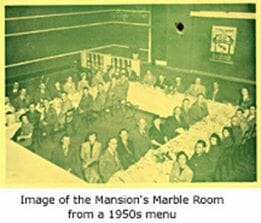 Carrie Roselee Groves remembers the night the restaurant burned, even though she was a child at the time:
“It must have been a grand place. I vaguely remember it when we rode or walked by but the only restaurants I had ever been inside by 1967 (I was 9 years old) was the Beacon or the Kream Kup. I do remember very well the night it burned. We watched the flames for what seemed to me like hours from our house on South 17th Street. Very sad and was most likely the first fire I ever witnessed.”
John Cofield is a hottytoddy.com writer and one of Oxford’s leading folk historians. He is the son of renowned university photographer Jack Cofield. His grandfather, Col. J.R Cofield, was William Faulkner’s personal photographer and for decades was Ole Miss yearbook photographer. Cofield attended Ole Miss as well.
Contact John at Johnbcofield@gmail.com