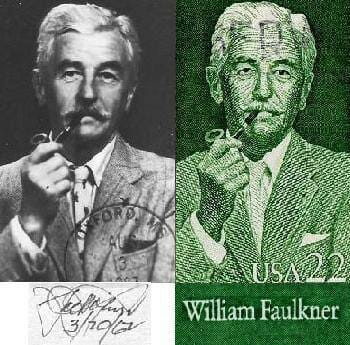 Dad took the last Cofield studio portraits of William Faulkner at Cofield’s Studio on Jackson Avenue in Oxford on March 20, 1962, just three months before Mr. Faulkner passed away.
The American novelist, short story writer and Nobel Laureate was honored on Aug. 3, 1987, with the release of a 22-cent United States commemorative stamp in his hometown of Oxford, Mississippi. The stamp is part of the Literary Arts series.
There is a bit of irony in the honor extended to Mr. Faulkner by the U.S. Post Office. The author held the title of postmaster at The University of Mississippi for three years, and by a number of accounts, he was not a model postmaster. It is said that Faulkner would ignore patrons who called at the window, and delayed taking outgoing mail to the train station.
Even more telling of his tenure as postmaster are the accounts that he would throw mail away on occasion, choosing to spend his time playing bridge and mahjong with friends and associates whom he had appointed as part-time clerks.
Faulkner resigned his position after a postal inspector can to campus to investigate complaints, and later remarked, “I reckon I’ll be at the beck and call of folks with money all my life, but thank God I won’t ever again have to be at the beck and call of every son of a bitch who’s got two cents to buy a stamp.”
John Cofield is a hottytoddy.com writer and one of Oxford’s leading folk historians. He is the son of renowned university photographer Jack Cofield. His grandfather, Col. J.R Cofield, was William Faulkner’s personal photographer and for decades was Ole Miss yearbook photographer. Cofield attended Ole Miss as well.
Contact John at Johnbcofield@gmail.com