Star Package houses more than just bottled spirits. The history of this particular liquor store’s location holds the rough-and-tumble spirit of Oxford’s past within its walls.
Storeowner Jeannie Zinn is the current upstairs resident and 1972 Ole Miss graduate, is one of those who loves the old building and what it has meant for her life.
When Zinn purchased the building in 1986, it was a dry cleaning business, Star Laundry and Cleaners, at 308 Jackson Ave. Back then, she also owned Rainbow Cleaners, which is still a prominent local business. However, the interesting story at 308 Jackson began more than 60 years before Zinn moved in. 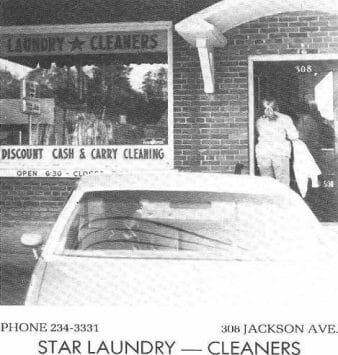 In the mid-1920s, Tom Mistilis and Spiro Villatos, two Greek immigrants, moved their families to Oxford and opened a small sub shop on the University of Mississippi campus. In fact, their restaurant was located directly below the post office where William Faulkner was postmaster. The School of Pharmacy now stands in its place.
By the 1930s, the University was building its first student union, so Mistilis and Villatos moved their restaurant just on the outskirts of campus — to 308 Jackson Ave. Mistilis’s Café opened downstairs, while a dancehall and rumored speakeasy occupied the second floor.
Mississippi was the last state to repeal prohibition in 1966. Speakeasies and dancehalls serving “bathtub gin” behind closed doors were popular spots for college students at the time.
“It was an old-fashioned, 1930s-style restaurant. It had an all male wait staff and wood-burning stoves,” Mistilis’s son, Angleo, said in an interview with the Southern Foodways Alliance. “It had tin ceilings, old Hunter ceiling fans, a lot of mirrors, and big, tall mahogany booths. There was a long counter. Food came out pretty quick, but it wasn’t like you ran in and got anything.”
Angelo remembers it was his job to clean the booths every Sunday and the restaurant served anything a customer could possibly order. He said if a diner wanted crab cakes or chicken croquettes, the staff would make them. Everything was delivered and prepared fresh each day. Live chickens were even kept on the back porch in crates.


Mistilis’s Café catered to mostly students because of its close proximity to the dorms and train depot. Zinn and Angelo recall stories of why the Café moved to its next location on the Oxford Square though. They both say that a college boy was thrown out of the dancehall upstairs for being over-served. Instead of going home to sleep it off, he rounded up his buddies and trashed the restaurant.
Mistilis and Villatos moved to the Square during the First World War and reopened as the College Inn.
In the 1950s, J.P. Catledge opened Star Laundry and Cleaners in the two-story building vacated by Mistilis’s Café. The laundry service remained open until 1991 when Zinn closed the doors to focus on her other dry cleaning business.
The building sat empty until Zinn says she decided to do something easier, and more fun, than dry cleaning Her brother was a liquor sales representative at the time, so the decision was easy. He helped her set up shop, with his contacts and knowledge of the Mississippi liquor industry, and they decided to keep the already established ‘Star’ name.
On Sept. 3, 1992, Zinn opened Star Package at the 308 Jackson Ave. site. She left the dry cleaning business altogether in 1993 when she sold Rainbow Cleaners.
Zinn remembers being the ninth liquor store to open in town, each serving its own area. C&M, PJ’s, Lindsey’s and Kiamie’s all catered to their own areas. Star’s location allowed it to continue to accommodate mostly students, just like Mistilis’s Café did before.

“I pride myself in having the best prices in town,” Zinn said. “I’m trying to make a living, but not trying to kill the customer.”
The store turned 21 this past September and sold more than 17,000 cases of liquor in 2013.
“It’s been a fun 21 years,” Zinn said. “I’ve enjoyed what I do. They always say ‘If you enjoy what you do, you’ll never work a day in your life.’ I think that’s true.”
Today, Star Package offers 1,400 different wines. Zinn said her package store carries more brands and varieties than most of the competitors, including the now popular flavored vodkas, gins, and whiskeys.
Zinn lives upstairs, above the store, in the renovated dancehall. From possible speakeasy to liquor store, 308 Jackson Ave. has seen it all.
– Kate Sinervo is managing editor for HottyToddy.com. She can be contacted by emailing kate.sinervo@hottytoddy.com.
Facebook
Twitter
Pinterest
Previous article
OHS Performs 'Sunset Blvd.' at Ford Center in March
Next article
Rebs Host Weekend Series at Swayze against Georgia State