Kyle Cornelius, a Muscle Schoels, Al. native, Ole Miss graduate, and Oxford resident, is looking for your help in publishing his novel Old Money, Old Secrets. He started a Kick Starter campaign to raise $6000 that will cover the costs of editing, printing and distributing his novel based in the Deep South.
Below is his Kick Start information and more information about the novel. To give to Kyle’s campaign, go to: https://www.kickstarter.com/projects/kylecornelius/old-money-old-secrets, watch his video, and choose to back his project. 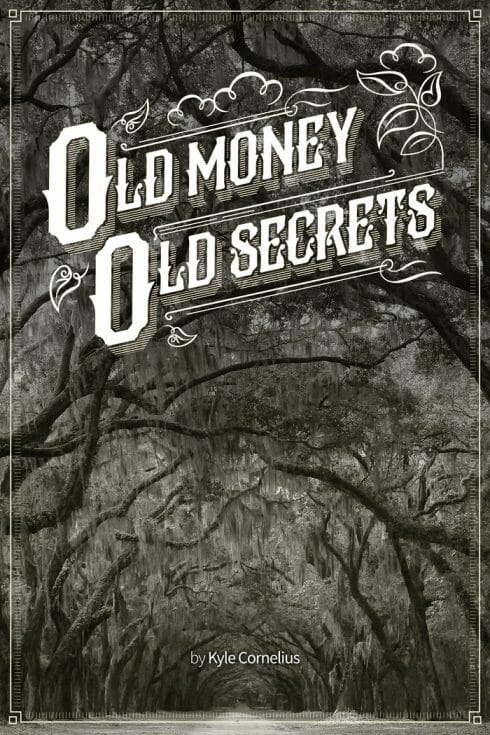 Old Money, Old Secrets: A Memphis commodities trader uncovers deadly secrets hidden since the Civil War in the backrooms and backwaters of the Deep South.
“Sometimes our own family secrets seem as fresh to us as a new wound and as tangible as a smoking gun.”

Fast forward to the modern day. Cliff Wade, a young commodities trader in Memphis, is one of the fastest rising young professionals in the city. He is ambitious, smart, and hungry. Shortly after a farm auction in the Arkansas Delta where Cliff’s firm paid way too much to buy some land to use as a company hunting retreat, Cliff’s boss is found dead with his Mercedes wrapped around a tree. When he is contacted by a seductive female buying agent for Union Cotton, one of the largest agribusiness in the country, about purchasing his firm’s recently acquired hunting land, Cliff begins to suspect that maybe the car accident was no accident.
In attempt to get to the bottom of the murder, Cliff is drawn into the secretive and deadly world of old money in the Deep South. Set in and around Memphis and the Mississippi Delta, Cliff battles the wealthy and powerful heirs of a corporate empire with a family secret to protect, a secret that dates back to the end of the Civil War. From the halls of a grand antebellum plantation home, the unforgiving cotton fields of the Mississippi State Penitentiary, and the offices of high finance in downtown Memphis, Cliff fights for his life as he tracks the clues to unravel the mystery behind a conspiracy that has been hidden by the flood waters of the Mississippi River for over a century and a half; the true motives behind the assassination of Abraham Lincoln.
Taking the names of actual people from history, and gleaning inspiration from events that really did happen, I have written an adventure novel that serves up a creative, fictional interpretation of what could have led up to the night of President Lincoln’s murder at Ford’s Theater. The story is set in the modern day, with flashbacks to the events of April 1865. I have had a lot of fun writing this book and I hope that it’s a lot of fun for y’all to read.
This is my first novel and I plan to write more. Writing is something that I’m passionate about and I will continue to write throughout my life no matter what my day job is. For new writers in the ever changing publishing industry, self publishing is a great way to go. It gets your work out there for people to enjoy and allows you to have more control over your creative process. I need money to turn my novel into a finished product and I whole heartedly appreciate your support of my writing career.
WHAT’S THE MONEY FOR?
$2000 – Editing
While I’ve edited and re-edited and written and re-written this book about ten times, I wouldn’t think of releasing it without first having a professional editor go over it. Having an outside editor is an invaluable resource for all writers. Of course I think my book is good, I’ve been working on it now for 18 months, and that’s exactly why I need an editor. Even the most seasoned writers don’t catch all of their own mistakes and having some professional input on your work before you publish is very important.
$500 – Formatting
I need to have somebody format my novel to make it look like a real book. Right now its just a really long, intriguing Word file.
$1500 – Printing Costs
While the publishing industry is becoming much more oriented towards print-on-demand, that first round of books can be a bit costly.
$1000 – Marketing and Industry Must-Do’s
First of all, to sell any book you’ve got to pay for an ISBN number, which identifies your work as unique and lets book stores know exactly what to order. Then I will pay for some book posters to give to independent book stores, who will hopefully put them on the wall or in the window. I will also need some money for advertising online. When you sell books in the Kindle Store or through Apple, much of the marketing is done pay-per-click style like Google Adwords. You create a marketing campaign and pay to have your book featured on the store more prominently so more people see it, which leads to more sales.
$1000 – Prizes for Y’all
I really need $5,000 to go towards the book, but I want to treat all my supporters well and give everybody some nice prizes. I’ve got to factor in the costs of the products and shipping into this campaign. The books, t-shirts, and Garden & Gun subscriptions that y’all are going to get will cost around $1,000 when it’s all said and done.
WHAT DO I GET FOR DONATING?
Everybody gets a hand written thank you note no matter how much they donate. That’s just common courtesy, and I think emails are too impersonal.
$40 gets you a signed book addressed to whomever you please. Please be mindful that I’m using real high quality materials to print this book. Self published books are notorious for looking, well, self published. I want to present this book, and therefore my work that I’ve spent a lot of time on, in the best way possible. I know that $40 seems expensive for a novel, but these are going to cost a little more to print than the average trade paper-back.
$80 gets you a signed book and a t-shirt. I’ve got a really cool looking design that will be printed on some nice, high-density cotton t-shirts. Think of an up-scale clothing brand like Vineyard Vines. They wouldn’t print their brand on a low-quality t-shirt, I’m not going to put mine a cheap shirt either. Please let me know what size you want. “Old Money, Old Secrets” is the back. 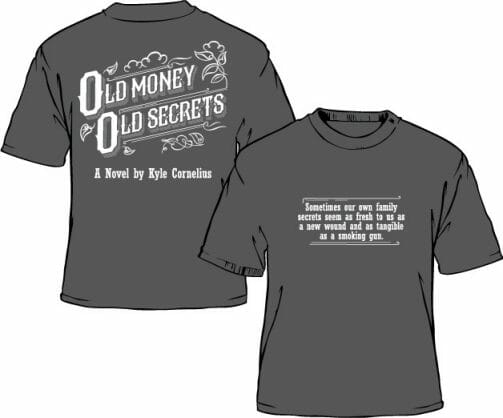 $150 gets you all of the above and a 1-year subscription to Garden & Gun magazine. Garden & Gun is a great lifestyle magazine that writes about all things Southern. It’s not just about gardening, and it’s not just about guns. The magazine has articles to appeal to all types and all members of the family, assuming that you don’t hold a grudge against southern things, and if you do then you probably won’t enjoy my book. I like Garden & Gun and I thought to myself, “I write about the South, they write about the South, perfect.” 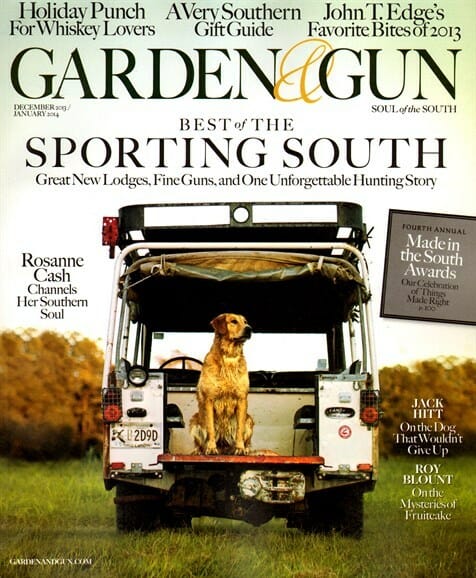 I want to give special thanks to Connor King for doing such a great job shooting and editing the video, Martin Antoon for performing and recording the awesome blues backing track on the video, Ben Gilstrap for providing the video narration, Brandall Atkinson for providing the photo of the oak lined drive that is on the book cover, Jeremy Vaughn for doing a jam-up job designing the book cover and the logo on the shirts, and Robby Ferguson and his team over at Oxford Print Wear for formatting and printing the t-shirts. Thanks so much y’all for being a part of this project.
Last but certainly not least, I want to thank the donors who are making this all possible. I can’t tell you how much I appreciate your support. I hope that you get as much enjoyment out of this as I have.
All the Best Everybody,
Kyle Cornelius