Charlie Adams is an Oxford native, graduate of Lafayette High School and a member of the Ole Miss Class of 1985. Adams is a journalist, author, and motivational speaker.
I have long felt my professional purpose in life is to inspire people by delivering talks and writing newsletters on the inspiring people I come across on the speaking trail.
Check this out! Last week, while speaking near Indianapolis at the annual Shelby County Soil and Water Conservation District meeting, and man named Don Parker was seated next to me (photo below). 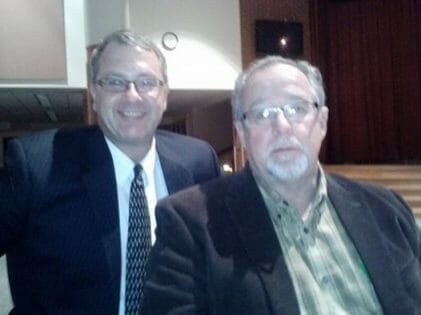 His grandmother was Edna Parker, who was the oldest person in the world when she died in 2008 at age 115.
115! My goodness.
Don told me Edna lived alone in her own home until age 100 and used a ladder to change light bulbs. “When we saw her doing that,” he told me, “we figured it was time to get her to move in with relatives so they could watch out for her.”


Edna Parker was born on April 20, 1893, in Morgan County, Ind. She graduated from Franklin College in 1911 and taught in a two-room schoolhouse until she married Earl Parker, her childhood sweetheart and next-door neighbor.
As a farmer’s wife in Indiana, she rose at 4 a.m. to fix breakfast for the family and hired hands and do her chores, which included maintaining the barn and butchering chickens for Sunday supper.
She outlived her husband, who died in 1938, and their two sons. She never remarried. At the table I was sitting at, Don’s wife Charlene told me she used to joke with Edna that the reason she lived so long was she didn’t have a man dragging her down!
She spent her last years at a Convalescent Center not too far from Indianapolis.Get this! A fellow resident of the center was Sandy Allen, whom Guinness World Records considered the world’s tallest woman at 7 feet, 7 inches. Allen died in August that year at the age of 53.

There are amazing things happening every day out there in this world! What were the odds that the world’s oldest person and world’s tallest woman would have been living at the same rest home at the same time?!
In 2007, a meeting was arranged between then-114 year old Edna and other super-centenarian, then-113-year-old Bertha Fry of Muncie, IN. A Guinness representative on hand to witness the event said their combined age of 227 was “the highest aggregate age of two people meeting each other.”
Edna loved to eat eggs, sausage, bacon and fried chicken. At 113 she was on few meds and still walking and at 114 she was still funny. She joked that 114 was several years too long and that she probably knew George Washington!

Besides the grandson of the world’s oldest person at my table, I also happened to have a lively man who entered with a big cowboy hat and a grand way of living life to the fullest!
Tom Winterowd, cigar, brown leather vest, and all sauntered over to our table to have a seat. Tom, 88, lost his wife not too long ago. He hired a jazz band to perform at her funeral to celebrate her life. “And we had great food to eat there!” he told me. “Not that damn finger food! We had a party!”
As I share in the Stoke the Fire Within program, that’s the ‘running the steps’ life instead of the ‘tripod’ life (if you haven’t heard that powerful story, I have the video down below).
When I asked him the secret of reaching old age, he said, “Having old relatives!”
The other inspiring thing that happened to me that night in Shelbyville was before speaking I was walking around the building getting my thoughts together. Their meeting was being held in a banquet area of a Middle School. I just happened to be drawn to this plaque (photo below)
Having delivered many Teacher/Staff motivational programs over the years, the message on this plaque really hit me.
“A teacher affects eternity – He can never tell where his influence stops.”

While this plaque was in memory of a man, former teacher and Principal Lester Mullins, it obviously applies to men and women, and not just teachers. We all impact eternity. Your influence, with what you do today, this week, this month, will impact people in ways you may never realize.
As you go through this life, as I told the Women’s Council of Realtors in a program last Thursday, don’t just have a good day. MAKE it a great day! Choose to be positive. Make optimism your companion each day. Take dead aim on setting and reaching your goals. Serve others. Be a positive, solution centered, team oriented person. Be so valuable to your group that when you retire your blood is in the bricks there.

Amazing and inspiring things are happening EVERY DAY out there. Last Wednesday night, while I was speaking in Shelbyville, the Boston College basketball team was facing #1 Syracuse at Syracuse, where they also faced the 30,000 Syracuse fans. Boston College was 6 – 19 and a massive underdog to the undefeated 25-0 Syracuse team. But B.C. was on a mission. Days before, their beloved Dick Kelley had been buried back in Boston. The 48 year old Kelley was an athletic department media relations official who had fought Lou Gehrig’s disease for 3 years until the very end. He was diagnosed in September 2011 but kept coming to work, even as he could no longer drive, then walk, then stand.
In his 2-plus decades at the college, his mission was to serve the young people there. He preached his mantra of

“positive and humble” to the athletes. He rarely took a vacation and had an off campus apartment that the athletes often visited. He was always there to mentor them, and often did it with tough love. One player said Kelley had been the most important person on campus in his development as a student. The picture below shows what Kelley meant to them, as they had a moment of silence for him before playing.
Playing for his memory, and with them convinced he was looking down on them, Boston College stunned #1 Syracuse 62-59 in one of the biggest upsets in college basketball history. A 6-19 team beat a 25-0 team in front of 30,000 opposing fans at the Carrier Dome in Syracuse.
Dick Kelley may be gone, but his blood will always be in the bricks where he worked at Boston College. And as one co worker there said, Dick will never die because he planted so many positive seeds.

Charlie Adams is the author of 4 books on positive attitude and peak performance, including 2013′s “How to Build a Positive Attitude and KEEP the Darn Thing!!” and “Stoke the Fire Within.” His books and motivational keynotes and seminars are designed to make sure events reach their objectives and to help create winning cultures. Email him at: Charlie@stokethefirewithin.com.
Facebook
Twitter
Pinterest
Previous article
Author Expert on Meredith Signs Book Today in Oxford
Next article
Cory Wilson Named Senior Advisor to Treasurer Lynn Fitch