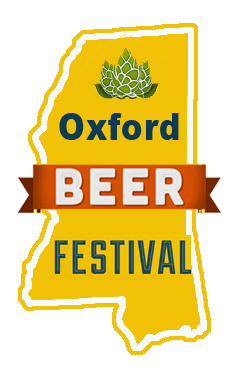 Tickets are now available for the Oxford Craft Beer Festival & Food Show, slated for Saturday April 19, 2014 at the Colonel’s Quarters on Highway 6. The bounty of beer and food begins with more than 140 craft beers poured under the beer tent. The 2014 festival features the first-ever South Eastern Pizza Classic in which pizzerias representing SEC schools compete for a grand prize.
The fun picks up where last year’s event left off, again having fun with pretzel necklaces and mingling with brew masters and brewers under the big beer tent. A home brew area features Memphis Home Brewers and Mississippi Home Brewers serving samples and live home brewing demonstrations and networking opportunities for home brewers.
The food part of the event focuses on having an appetizer, one entrée, and a dessert prepared by each of a number of local chefs to pair with the perfect brew.  Complimentary samples of food from other local chefs and choice steak cuts provided by the Mississippi Cattleman’s Association add to the noshing. There will also be food vendors onsite.
The highlight of the food show, organizers say, is the pizza competition. The winner will become part of the US Pizza Team.
Admission includes all the beer you can sample, food sampling a first-come, first-served basis (local chef samples guaranteed for VIP ticket holders), event activities, live music performances, access to food and art vendors, and complimentary souvenir mugs for the first 1,000 ticket holders.
The main event will run from noon until six p.m. with the last beer poured at 5:45 p.m. An Early Bird Event will be held from 10 to 11:30 a.m. VIP may enter the event at 10 a.m. Free parking is available near the festival grounds, with close parking for VIP and Designated Driver ticket holders. General Admission is $45 and $15 for designated drivers. VIP tickets are $75 and $25 for designated drivers. Early Bird Event admission is $25.
For more information or to purchase tickets visit www.oxfordbeerfest.com.