Locomotive is Young Child's Book With Plenty of Steam 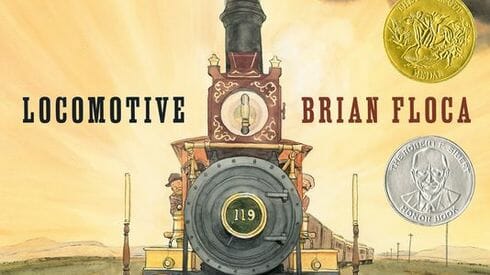 At the end of January, the American Library Association (ALA) announces their award winners for the previous year.
Because Northwest supports a strong Early Childhood Education program, the library is expected to purchase those award winners for their students. The program concentrates on serving children younger than five years of age.
Goodie! This year’s Caldecott Medal winner is nostalgic, dusty, informative and loud. I am talking about “Locomotive” by Brain Floca. In the soft watercolors enhancing Floca’s drawing, readers will feel like they are looking at old tintypes. He even includes his own drawing of a tintype on the title page.

Let me regress slightly and tell you first about the Caldecott Medal. According to ALA, the medal is named in honor of 19th-century English illustrator Randolph Caldecott and awarded annually to an artist with the most distinguished American picture book for children.
I believe Randolph Caldecott would be proud to hand his award personally to Floca had he been alive. Floca’s work is set in 1869 during the Victorian Era. Caldecott did his best drawings enhanced with watercolor just like Floca between the years 1861- 1879.
“Locomotive” opens with men in various maneuvers hammering down a spike as American workers connect east to west by rail. Listen to the noise from Floca’s words.
“CLANK CLANK CLANK! Men came from far away to build from the East, to build from the West, to meet in the middle. They cleared the rocks and dug the tunnels. They raised the hammers and brought them down—‘Three strokes to the spike, ten spikes to the rail!’ CLANK CLANK CLANK!”
The next page shows a crowed train station platform in Omaha, Nebraska. At the end of the stage stands a mother, older daughter and younger son all bending over to see the approaching train.
“Hear a clang of the bell, hear the huff of an engine—her crew is bringing her out! Clang-Clang-Clang…See a puff from her stack—a puff of smoke, a smudge in the sky. CLANG-CLANG-CLANG! Here she comes! See a puff, a smudge, a cloud …WHOO-OOOOO”
Floca studied with David Macaulay who illustrated “Castle” and “Cathedral.”  Through Floca’s artwork one rides No. 119 through the west, arriving at Sacramento, California where the family joins their father.
This picture book will delight old and young as they ride the exquisitely drawn rails. All Aboard!
Maggie Moran is director of learning resources for Northwest Community College


Facebook
Twitter
Pinterest
Previous articleAdministrator of Year is Passionate About Kids Learning
Next articleSharen's Story: From a Life Altering Challenge to Being Called up on Stage With A World Class Pianist!