Five Mississippi Baptist and Methodist pastors have sent a letter to state legislators urging them to keep discriminatory language out of a so-called “Religious Freedom” bill that passed the House in late January and is now before House Judiciary Committee B. 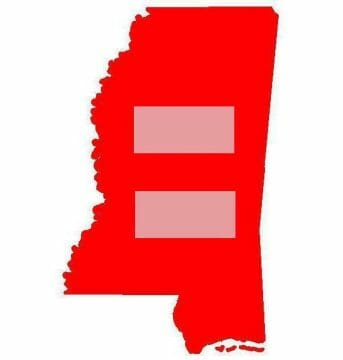 An amended version of the bill, SB2681, cleared the House Judiciary Committee B Tuesday morning. The amendments, as urged by business leaders, are reported to have erased the discriminatory elements, though opponents, including the Human Rights Campaign, argue the bill sent to the committee left room for discrimination against gays, lesbians and trans-gender people on religious grounds.
A provision of the bill that inserts “In God We Trust” onto the state seal is said to have diverted attention from menacing provisions in the bill as it passed through the Senate with unanimous support in late January..
SB2681 has put a national spotlight on Mississippi for joining several other Republican-led states in considering measures that legal experts say would allow businesses to refuse service to gay and lesbians, among others. The bills in Mississippi, Kansas, Arizona, Tennessee and Georgia had provisions allowing business people and others to use religious beliefs as a state-stationed defense in discrimination suits.
The Rev. Rob Hill of Broadmeadow United Methodist Church in Jackson said the discrimination efforts stray from the true message of the gospels.
“Jesus calls us to love our neighbors as ourselves,” Hill said in an interview Tuesday morning. “We didn’t feel like this was loving our neighbors as ourselves.”
At the urging of business leaders, the Civil Subcommittee of the judiciary panel last week struck much of the discriminatory elements from SB 2681 as originally that would allow businesses to refuse services to the LGBT community on the basis of religious freedom.
In the letter the pastors emphasize the different between between religious space and commercial space when applying religious freedom.
“When providing a service to the public, businesses cannot pick and choose whom to serve and whom to deny. This is basic discrimination and it has nothing to do with religious freedom,” the letter states.
Last week, Arizona Gov. Jan Brewer vetoed a similar measure that had passed through that state’s legislature after receiving pressure from a number of prominent Arizonans such as Sen. John McCain and Sen. Jeff Flake, as well as the Arizona Chamber of Commerce and Industry, the Arizona Tech Council, dozens of faith leaders from across the state, major corporations including AT&T, PetSmart, American Airlines, Delta Airlines, Apple, and even the Arizona Super Bowl Host Committee and the Arizona Cardinals.
Rev. Hill said the Methodist and Baptist pastors decided to send the open letter after conservations among themselves. “We didn;t want something like this in our state,” Hill said, adding that time constraints prevented getting more faith leaders to sign the letter.
Here is the letter:
“We write this letter in opposition to Senate Bill 2681. Our opposition rises out of our moral obligation to do what is best for our communities.
As people of faith, we are ardent supporters of religious freedom for all Americans. We know that it is the religious freedom to worship as we choose that makes our country and our state great. Religious organizations have a long established First Amendment ability to operate according to their own beliefs and we as faith leaders hold that right as sacred and will do all in our power to preserve it.
However, we also know that there is a difference between sacred space and commercial space. When providing a service to the public, businesses cannot pick and choose whom to serve and whom to deny. This is basic discrimination and it has nothing to do with religious freedom.
This legislation will have immense and negative consequences on all communities, including religious communities. First, it sends the message that one’s particular religious interpretation can become the law of the land. Second, as religious leaders we know that families are harmed when legislation unfairly opens up members of our communities to discrimination. As a state, we know we can do better than that.
As Methodists and Baptists, we may not always agree on all things, but we can agree that this bill goes too far and is unnecessary. Because we are people who are called to “love our neighbors as ourselves,” we ask Mississippi legislators to reject Senate Bill 2681.
Rev. Rob Hill, Broadmeadow United Methodist Church, Jackson
Rev. Stan Wilson, Northside Baptist Church, Clinton
Rev. Bruce Case, Parkway Hills United Methodist Church, Madison
Rev. Bert Montgomery, University Baptist Church, Starkville
Rev. Rusty Edwards, University Baptist Church, Hattiesburg
– Mississippi Business Journal Blog, March 4, 2014