Charlie Adams is an Oxford native, graduate of Lafayette High School and a member of the Ole Miss Class of 1985. Adams is a journalist, author, and motivational speaker.
It was in East Lansing, Michigan this past weekend that I learned over a beautiful story that will inspire you through this week.
My youngest daughter, 10 year old Gracie, was there for a travel team basketball tournament. I took the picture of her below near Michigan State’s football stadium. 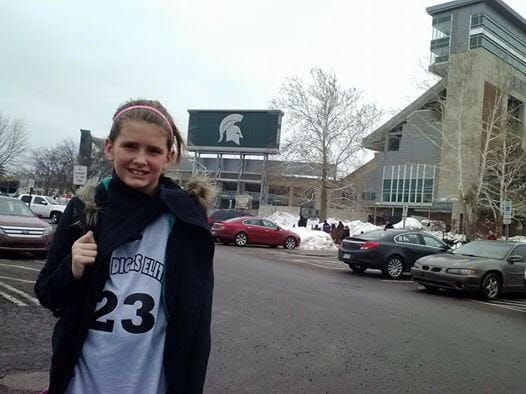 While there on campus I found out about the very, VERY special bond between a big, tall, strong college basketball player, and an 8 year old girl fighting an agressive form of childhood cancer.
Michigan State’s Adreian Payne asked Lacey Holsworth to walk out with him on Senior Day at their recent game vs the University of Iowa. 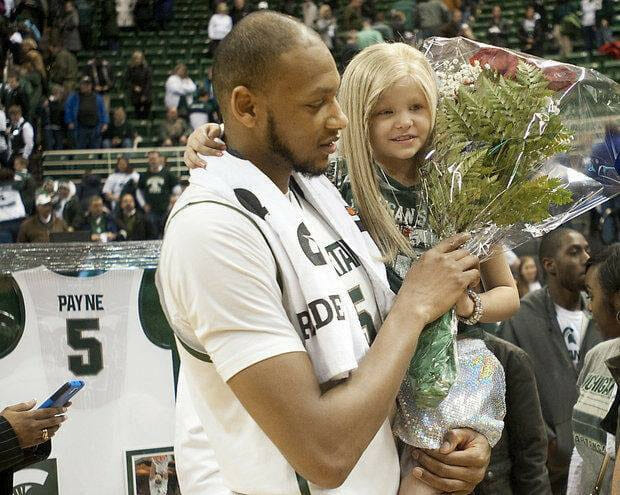 Lacey, an 8-year old from St. Johns, Mich., met Adreian two years ago when he and his teammates visited her in a local hospital. She loved his smile. He connected with her spirit. Adreian gave Lacey his phone number that day, and the two began trading motivational quotes via text.
She had just been diagnosed with neuroblastoma, a large tumor in her abdomen wrapping around her spine and even paralyzing her for a couple months.
Lacey and her family went to Disneyland this past November to celebrate being informed she’d conquered the childhood form of cancer that had threatened her life for nearly two years.
But a few days later, Lacey felt a familiar pain in her jaw. She was taken to the hospital, where tests and scans confirmed her doctors’ worst fear.
The cancer had returned.
And the early outlook was that this time, it wasn’t going away.
When her cancer returned, Adreian immediately asked his 18,000 twitter followers to pray for her. After chemo, he was there in the recovery room with a stuffed zebra. Groggy, she looked up at him and said, “Superman, you are here!”
She battled hard and found the strength to be with her favorite player the other day on his big day, Senior Day! 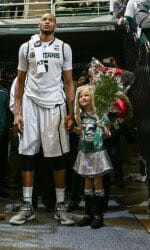 Lacey has been constantly wowing doctors and her parents with her maturity. The radiation treatment requires five minutes of sitting completely still while wearing a heavy mask. Many adults require sedation, but she doesn’t.

Looking forward to seeing Adreian at games has given Lacey strength. She wears his No. 5 jersey to games. She gave him a stocking filled with goodies at Christmas. Her bedroom has a special spot in her bedroom for his newspaper articles and pictures. She calls it “The A.P. Wall.”
He calls her a blessing from God. The picture below is adorable. This nearly seven foot man and his little friend. 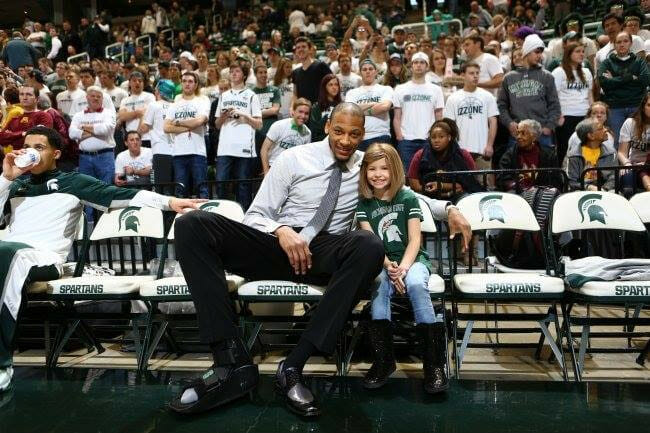 In my Talks and writing, my goal is to inspire others by sharing the stories of those battling and overcoming life challenges. In reading more about Adreian, I found that he was a little boy when his dad went to prison and when his mom died in his arms after a horrible asthmatic reaction. Adreian was just 13 years old when he couldn’t find his mom’s inhaler when she needed it the most. She had battled asthma all her life and this time it was too much – she collapsed on the bed. Adreian held her tight as she died in his arms.

This young man not only fought through his mother’s death, he also fought through a learning disability to move himself from barely knowing how to read at age 16 to qualifying academically for a Big Ten university just a few years later.
Here’s another impressive thing about this young man. He worked hard to develop himself into a prospect to play professional basketball. He grew to 6’10 and 245 pounds with a seven foot wingspan. Last year Adrian considered leaving MSU after his junior season and entering the NBA Draft. He was really unsure whether he wanted to leave for the pro’s. A couple days before he had to make his decision he visited Lacey in the hospital and she told him she wanted him to stay at MSU because “I can’t hug you when you are on TV in the NBA.”
He decided to stay.
Two battlers, that have stoked their fire within. As Lacey takes on each day, and when she is strong enough to go do things like go to a game, she often will tweet about it and add the hashtag #kissitcancer.
About a month ago, she tweeted:
“I refuse to be a victim. No matter what I’ve been through, I’m still here. I have a history of victory.”
Charlie Adams

Here is a touching video feature that was done on them this time last year …..

To view their Senior Day walk together, click here

— Charlie Adams
Please forward their story to those you know would be inspired from it….

Charlie Adams is the author of 4 books on positive attitude and peak performance, including 2013′s “How to Build a Positive Attitude and KEEP the Darn Thing!!” and “Stoke the Fire Within.” His books and motivational keynotes and seminars are designed to make sure events reach their objectives and to help create winning cultures. Email him at: Charlie@stokethefirewithin.com.