The story of my friend Betty Alexander will cause your jaw to drop at times, and for you to wonder how she was able to move forward. 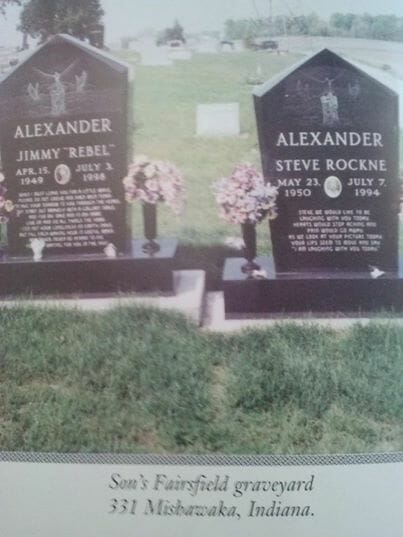 This woman is a battler, always fighting for her boys even after they were gone. Where their plots are located (photo above) at the cemetery is a poorly lit area. Young people would go out there at night and party, leaving trash. Betty bought a portable light that actives at night and took it out there. When she went back the next day, it had been stolen.
She went to the Electric Company and they said they would have to come across the street with live wires. They didn’t think it would be cleared as certain City officials would have to sign off on it. They told her not to expect much. She smiled and got the paperwork and went to the Mayor’s office. To her surprise, every official needed happened to be in his office. They authorized it without hesitation.
There was been light over the graves ever since, and to this day Betty still pays $8 a month to keep it that way!
As Betty had found the strength to forgive the man who killed Steve, she did with Jimmy too. She went to the local mall and looked and looked for a card. She found one to send to him, that had this message:
You’re In My Prayers
God will give you the courage to carry on.
The strength to handle whatever comes.
And if there’s something I can do for you, I want to help in anyway I can.
So please remember that you’re never alone, For God cares, and so do I.
Through all of this, Betty started attending a faith based University in her 60’s. She graduated at age 68 and today at age 80 still does weddings and funerals and counsels those hurting. She is a foster grandparent for a non profit called REAL Services. She is a mentor and tutor for at risk/special needs children and youth in her community, volunteering 20 hours a week in local organizations such as schools, Head Start and day care centers.
In my keynotes and seminars, I sometimes say that the most content people out there are those that have or are going through incredible challenges, and yet still serve others. This is what Betty feels about that:
“I know you don’t feel like doing anything at a time like this, but helping others is like medicine for the heart. It helps you to get your mind off yourself.”
In my motivational presentations and writings, I try to inspire you with stories of incredible people like Betty. If she can move forward and do all that she has done and continues to do, by golly we can overcome our challenges.
I have been blessed to know Betty for about ten years. She is always looking to help others. If you or someone you know would like to talk to her or if you would like to get her book “Tomorrow Will Start Without You,’ shoot me an email and I will get you her contact information.

Charlie Adams is the author of 4 books on positive attitude and peak performance, including 2013′s “How to Build a Positive Attitude and KEEP the Darn Thing!!” and “Stoke the Fire Within.” His books and motivational keynotes and seminars are designed to make sure events reach their objectives and to help create winning cultures. Email him at: Charlie@stokethefirewithin.com.
Facebook
Twitter
Pinterest
Previous articleOxford High School Students Tapped as 2014 National Merit Finalists
Next articleQuail Population