Oxford is known for being a quaint, walk-able small town. As streets become more crowded and traffic worsens, modifications are being made for motorists and pedestrians alike.
Oxford is expanding, and changes are being implemented to accommodate the growing population and traffic. The Pathways Commission met Monday to discuss plans to improve safety and maintain quality of life for pedestrians and drivers alike.


Reanna Mayoral, the city engineer, spoke to the commission about ongoing and upcoming projects, which strive to improve safety, while maintaining the town’s charm.
Mayoral addressed the Sisk Ave. construction plans in relation to the new Oxford High School, which is near Della Davison Elementary. With safety as the number one priority, the plan calls for a new, 90-degree turn lane.
The concern lay with cars having to cross over the bike lane to make a turn. With the new traffic plan, the car will merge into the bike lane before turning. Turning from the curb improves safety for both the driver and pedestrian.
“We addressed geometrics and improved safety with this 90-degree [angle],” she said.
With this direct angle, it is easier to see oncoming traffic for pedestrians and vehicles and easier for cars to make the turn. “It will eventually [have to] be a signalized intersection.”
While efforts are being made to improve safety around the schools, further precautions are necessary in other parts of town. “My kids can go to the school, but not to the movies or Wendy’s,” Mayoral said.
The Pathways Commission also discussed the installation of curb lanes to improve biker and pedestrian safety. Cars would not be able to cross over the curb and a separation would be maintained.
Oxford prides itself on having a highly walking-, running-, and cycling-friendly community. Along with ensuring safe routes to schools, Oxford engineers are determined to extend and improve bikeways.
“We’ve got a lot of miles of bike lanes in town, but [the problem is] connecting them,” Mike Mossing, Pathways Commission member, said.

Newly instated UM parking and traffic director, Mike Harris, added, “You’ve got the pieces, but just have to put them together.”
Mayoral continued discussing the bikeway plans which include a combined bike lane and sidewalk that will be 10-feet wide and off the road. Getting the sidewalks away from the street and traffic is pivotal to ensuring safety.
The commission addressed the installment of bike turn lanes too. There are two options for the lane design, one being slightly less safe, but more cost effective, and the other being very safe, but very expensive. With a limited budget, decisions such as this become difficult.
Bike month begins in May and commission members are excited for the Oxford community to learn more skills and safety. While the activities are fun and entertaining, education is also a major focus. Several events are taking place in May, including classes, bike to school and bike to work days.
Commission members agreed that bikers and drivers need to understand more about biker safety before people start getting hit by cars.
Often in Oxford, traffic jams and close encounters between pedestrians and drivers occur because people don’t understand the layout of the streets.
“Most people who aren’t from here don’t understand our streets,” Pathways Commission member Michael Worthy said.
Harris chimed in that speaking from experience he could not figure out the inner and outer circles around the courthouse. “It took me a while,” he said. “And I’ve been in (the parking business) for 18 years.”
Harris sat in on the meeting to hear the commission’s thoughts and plans. A graduate of Mississippi State, he joked that his family was happy that he finally made it to Ole Miss.
He is working with the Pathways Commission to improve conditions and lesson traffic, while maintaining safety as the top priority.
The main focus of both the commission and the parking department is to keep the city of Oxford healthy and happy. They are working toward this by making improvements to meet the growing population. While there is still work to do, they are taking big strides.
“There still might be holes, but we are working on the big stuff,” Mayoral said.
Their work will continue at the next Pathways Commission meeting which will take place on Monday, April 21.
Below are maps of bike and pedestrian trails in Oxford and Lafayette County: 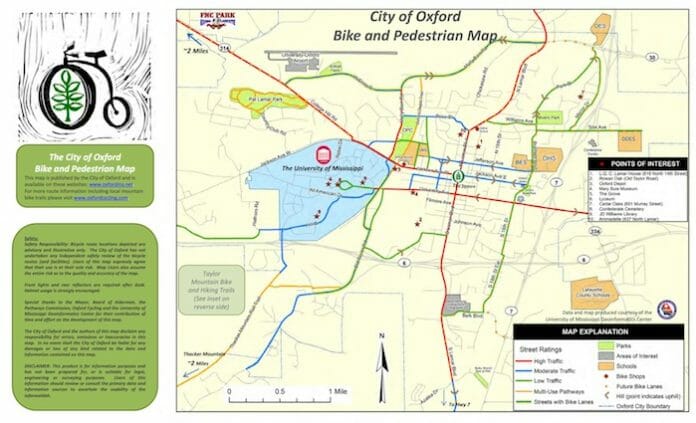 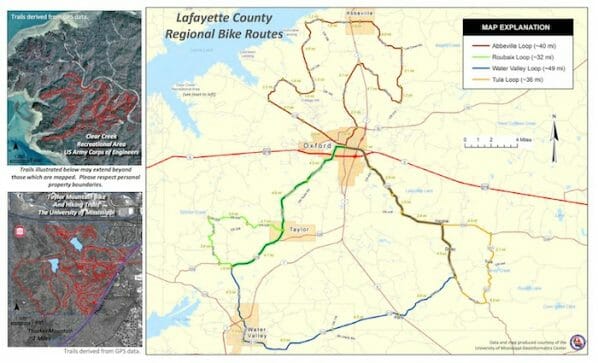 – Joanie Sanders is a student in the Meek School of Journalism and New Media and avidly bikes around town. She can be reached by emailing jgsander@go.olemiss.edu.