Grits in Her Groove: Lynn Drury Joins Peach Jam at the Powerhouse 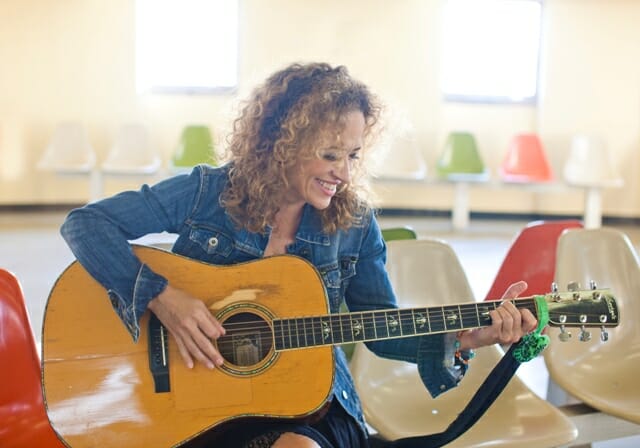 By George Atkins
Lynn Drury’s website carries an intriguing tagline: “Mississippi Grit, New Orleans Groove.” Having recently caught Drury in her Big Easy milieu, I could attest to the groove part, but I was curious how Mississippi was stirred into the recipe. A brief conversation after her during Valentine weekend gig at the Bombay Club led to a subsequent longer discussion in which she shared some insights on her Magnolia state roots and its influence on her music.
Mississippi will welcome Drury back on Wednesday night when she performs at Peach Jam 2014, a presentation of women artists at the Powerhouse Community Arts Center, also featuring Anne Babson, Kim Vodicka, Holly Peele, and Effie Burt. The show is March 27, 2013. Doors open at 7 p.m.
“Well, I was born in Yazoo City, but we moved to Carriere when I was four years old,” she said. “My mother is from Pascagoula, and my father from Noxapater, just north of Philadelphia, Mississippi. I have friends and family all over the state, and I graduated from USM and spent a few years in Hattiesburg, as well. The term ‘Mississippi Grit’ I guess I am identifying with the strong country music influence that I had growing up. I was a barrel racer for many years and in the rodeo circuit, so I was immersed in all things country until I was about 20. And then [I mix] that with the New Orleans laid-back groove. I think if you live in New Orleans, you can’t help but be affected by the sounds here. It seeps into what you do. After about 10 years here, I really felt that change and natural genre-bending take hold.”
That certainly comes through in the tracks on her 2011 album Sugar on the Floor. While there’s a slight country twang, it’s more old school Americana and blues-influenced, not the overproduced pop-country coming out of Nashville these days. Her new album, Come to My House, will drop May 17.
Though she considers New Orleans her home now, Drury has forged other Mississippi and Midsouth connections. She reminisced about temporarily relocating to Memphis after Hurricane Katrina.
“I was untethered, so to speak, with a renewed sense of keeping New Orleans music alive,” Drury said. “I started playing all the cover tunes I said I never would. Crazy, but true, I felt a need to represent New Orleans … I did also meet some amazing North Mississippi musicians during that time, in Oxford and Memphis, and made my fourth record, All You Need, in Clarksdale with Jimbo Mathus, Paul Taylor, and Justin Showah in 2006, which Jimbo produced.”
George Atkins is an instructor at the Center for Writing & Rhetoric at the University of Mississippi.