In 2007, Phillips and her two daughters fell in love with miniature donkeys after Martha Stewart showcased her miniature donkeys, Clive and Rufus, on her daytime talk show.
“We did not know miniature donkeys existed before,” Phillips said. “We’ve always had horses, but donkeys are more like big dogs.”
Phillips was the only miniature donkey breeder in Mississippi for several years and there. Today, there are more breeders in the state, including a family in Taylor, Miss. Since 2007, Phillips has bred nine babies on the farm. She does sell her donkeys, but only when she knows someone has fallen in love and will make a great home for the donkey.
They attend birthday parties, participate in church nativities and even visit day cares in in town.
In 2007, Phillips purchased two young female donkeys from a farm in Birmingham and two older jennets, another term for females, from a farm in Texas. Today, Phillips owns eleven donkeys, two Great Pyrenees dogs that guard the farm and donkeys, a handful of chickens, and a standard poodle named Ella, who is certified therapy dog. Ella makes regular visit to Hermitage Gardens in Oxford.
At first, Phillips’ two daughters, Mary August and Margaret Goodwyn, weren’t originally as excited about these new pets as their mother.
“Margaret Goodwyn really thought I had lost my mind,” Phillips said. “She was completely embarrassed and didn’t anyone to know we had changed from horse people to donkey people.”
However, Margaret has gotten used to the idea and even started bringing her friends home to see the donkeys.
“I’m really not an animal person”, Margaret said. “But the donkeys are really cute and playful. They make my mom really happy and its something that makes our home unique.”

According to the National Miniature Donkey Association website, Miniature Mediterranean Donkeys weigh about 200 to 350 pounds at maturity and average between 32 and 34 inches in height. That’s about the height of most dining tables or an 18-month-old child. They live for 35 years or more. These donkeys are not fully mature until 3 years of age, but can reproduce well into their 20s.
“Jackpot was still a baby when he visited Discovery Day School, so Mary August and I just drove him in the back seat of my Acura,” Phillips said.
Miniature donkeys are not native to the hills of North Mississippi, where Phillips’ farm Wisteria Woods is located. In fact, they are not native to the United States at all.

Miniature donkeys are native to the Mediterranean islands of Sicily and Sardinia. After a vacation there in 1929, Mr. Robert Green, a stockbroker in New Jersey, was the first to import these animals into the United States.
Mr. Green kept the donkeys as pets at his New Jersey estate and delighted in driving them in the small carts he had specially made for them. In 1935, he sold a few of his donkeys to his friends, including Anheuser-Busch owner August Busch, Jr.
In the 1950s, Busch sold a miniature donkey to Daniel and Bea Langfeld as a pet for their daughter who had cerebral palsy. The Langfelds established the Danby Farm in Omaha, Neb., and were the first professional breeders of Miniature Mediterranean Donkeys in the US.
Since then, miniature donkeys have grown in popularity and the NMDA was established in 1989. The NMDA sets breed standards, connects breeders and sponsors various miniature donkey shows across the country.
Miniature donkeys are known for the distinct cross color pattern on their shoulders. Phillips said this particular pattern has an interesting story behind it.
Donkeys played an important role in the life of Jesus Christ, including bringing Mary to the inn to give birth and Jesus’ journey into Jerusalem on Palm Sunday. According to legend, after Jesus was crucified and all the other animals had left the sight, the donkeys stayed. As the donkey turned to leave, the shadow of the cross fell across its back and shoulders and there it has stayed as a tribute to these humble creatures. 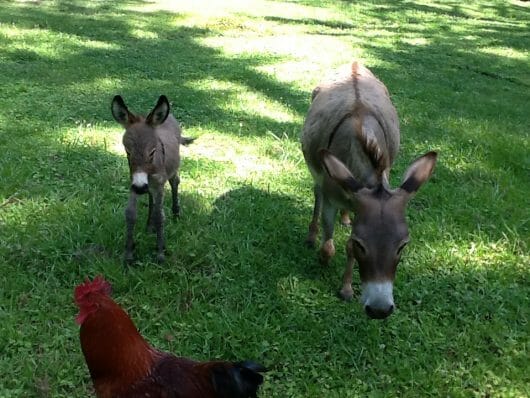 “Donkeys are very attentive mothers and it’s sweet to watch them nuzzling their youngsters and teaching them to graze and eat hay,” Phillips said. “ The babies are curious about everything and love to follow my Rhode Island Red chickens and sniff the cats.”

Phillips said this story is a real testament to the attitude and demeanor of the animals. She often sites a quote from Mr. Robert Green because she believes it best describes them:
“Miniature donkeys possess the affectionate nature of a Newfoundland, the resignation of a cow, the durability of a mule, the courage of a tiger, and the intellectual capability only slightly inferior to man’s.”


Due to originally being bred to withstand the harsh climates of the mountains of the Mediterranean, miniature donkeys have a slow metabolism, Phillips said. Because of this, donkeys do not require much food. Phillips gives each donkey a flake of hay every day and makes sure they always have fresh water. She said that she gives each of them a handful of grain in the evening just because she wants to.
Since miniature donkeys are not particularly common in this area of the country, finding the right vet proved to be a tough task, Phillips said. Dr. Hannah Heaton of the Animal Clinic of Oxford is one of the only large-animal vets in Oxford. Phillips often calls her to do routine check ups, inspect newborns, and provide vaccinations for her donkeys.
“She’s always there every time we see (the donkeys),” Dr. Heaton said. “(Phillips) is very hands-on in taking care of them. She is a really great owner.”
Having never seen miniature donkeys before meeting Phillips, Dr. Heaton said this has been a learning process of her as well. She said miniature donkeys are like horses in a lot of ways, they even require the same vaccinations. Dr. Heaton said it has been great to see the donkeys grow up and help take care of them along the way.
In the future, Phillips said she hopes to sell some of her current donkeys and have more babies born at Wisteria Woods. She’s not currently in the market to expand her herd, but says it is hard to pass up an opportunity if it presents itself. 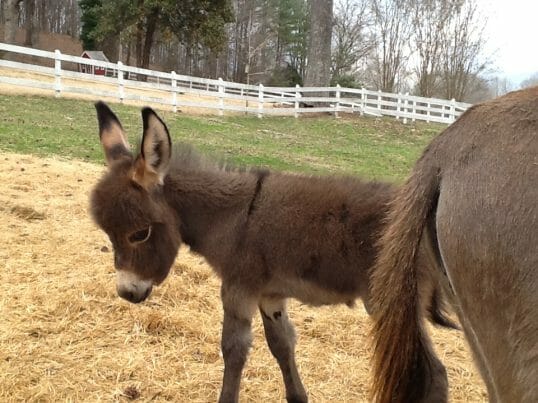 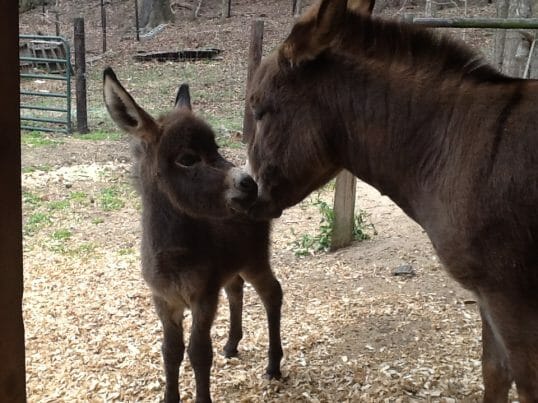 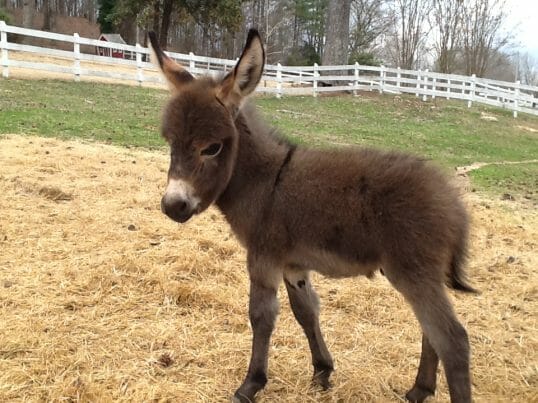 – Story written by Kate Sinervo, managing editor of HottyToddy.com. She can be contacted by emailing kate.sinero@gmail.com
– Photos provided by Susan Phillips, miniature donkey breeder and Director of Children’s Programs at OUUMC.