What will happen tonight has never happened before.
The University of Notre Dame women’s basketball team will take a 37-0 record into tonight’s National Championship game against the 39-0 University of Connecticut. Never in the history of men’s and women’s college basketball have two undefeated teams met in the title game.
Whether you follow basketball or night, it is a great chance to watch two organizations that are committed to excellence when they meet at 8:30 on ESPN. You will see the fire within both teams. 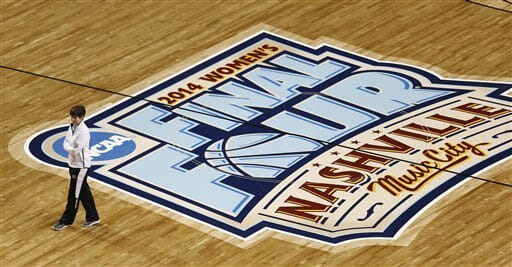 As I have written about here before, I have studied the Notre Dame growth since 1988 when I first moved here to South Bend, IN. Muffet McGraw (photo above) was going into her second year as head coach. Some of their home games drew crowds in the hundreds.
This past Monday night I attended the NCAA Tournament game at Notre Dame where they beat Baylor to reach the Final Four. A packed house of over 9000 fans paid $40 a ticket to watch them play. I took the picture below. 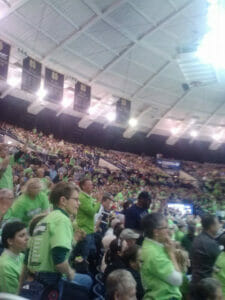 Their program and their coach epitomize excellence in product and customer service that is through the roof. When I first met Muffet in 1988 it was at a community service event. She was out to walk with people to raise money for a charity. She and her players have been heavily involved in community service ever since.
People notice.
She has constantly sincerely thanked the fans for what their presence has meant at games. This past week she personally wrote a letter to the local newspaper thanking them again. As a result, even in terrible winter storms with the roads iced over, thousands still make it to games.
When I covered peak performers for 25 years during my television news days, the common denominator I saw in champions was a constant desire to get better.
The thing that impresses me,” assistant coach Niele Ivey says,” is that she’s always trying to learn, even though she’s a Hall of Fame coach. She’s watching NBA games, she watches practices of other teams, she’s always asking questions, she’s always asking other coaches, what do you think of our team?”

McGraw has been named the National Coach of the Year for two straight years, which has been done only once before. That is like when Tom Hanks won the Academy Award two years in a row.
She recruits exceptionally talented players who are bright. Despite the challenging academic standards of Notre Dame, Notre Dame is one of only four programs to play for a national title and achieve a 100-percent graduation rate in the same season.
“I surround myself with great people, great coaches and great players,” McGraw told the South Bend Tribune recently. “They are all self-starters. They’re self-motivated. They’re extremely hard workers. Everybody does everything they can do to help us win. It’s a team effort. They make my job so much easier.”
McGraw has developed players to have a fire within, and a culture within their organization that always moves forward through adversity. In Monday’s big game against Baylor, with the winner going to the Final Four, Notre Dame’s most valuable player, senior center Natalie Achonwa, tore the ACL of a knee with just a few minutes to go. Before hobbling off to the locker room, Achonwa turned to her teammates and passionately implored them to finish the game with a victory. On crutches afterwards, she came out to help cut down the nets. Ever since she has been an ‘assistant coach,’ helping the players to stay positive.
McGraw told the rest of the players that each one would have to get a few more rebounds than usual to make up for all the ones Achonwa used to gobble up. In Sunday’s Final Four win over Maryland, Notre Dame outrebounded the bigger Maryland team 50-21!
Your organization is only as good as the people in it. Every year McGraw recruits players ranked among the top ten in the country and then gets them to play unselfishly together.
The Notre Dame Business Review, in an in depth story they did on her leadership style, says it is because she has become good at spotting the kind of selfish recruits that would harm their remarkable chemistry.
“I look closely at a recruit’s behavior on the court when I watch them play in high school,” McGraw told the Review. “Is she cheering for her teammates? Is she listening to the coach? I look closely at her relationship with her parents. When you go into her home, is the home a shrine to the child with awards and trophies everywhere?”
When she takes the recruit to the Notre Dame Bookstore during a visit to the school, she looks to see if they are interested in buying stuff for themselves or relatives or friends back home.
Being an exceptional leader means staying connected one on one with those you lead. One way McGraw engages with her players is by scheduling weekly five-minute meetings with each of them just to talk about what’s going on in their lives. Those conversations can be unpredictable, former player Lindsay Schrader told The Review.
“One day when I came to her office,” said Schrader, ” Coach told me she was reading this book and had a question for me. She said, ‘If you couldn’t die in your sleep, how would you want to die?’ I said, ‘What?’ She said, ‘Come on. Answer.’ I said, ‘If I couldn’t die in my sleep, I would rather die gazing at someone that I loved or in the arms of someone I loved.'” Schrader thinks her answer impressed her coach.
This past Friday the Notre Dame student newspaper came out with an editorial saying they feel McGraw should be alongside Knute Rockne, Ara Parseghian, Frank Leahy and Lou Holtz as the greatest coaches in the history of the school. Many people feel she is clearly the best coach at Notre Dame now, male or female, of any sport.
So tonight, if you can, watch 37-0 Notre Dame vs 39-0 UConn at 8:30 eastern on ESPN. Experts are saying it will be the biggest game in the history of women’s college basketball and set TV ratings records for the sport. Notre Dame is the underdog as UConn as the Huskies are loaded with even more talent, but I wouldn’t put it past McGraw to inspire her team to find a way to win.