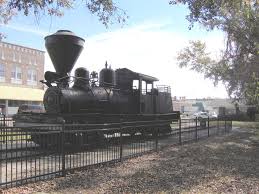 “Pearl Rivers”, the Pen Name of Elia Jane Poitevent Nicholson,  was the owner and publisher of the New Orleans Daily Picayune, a newspaper named for the Spanish coin.
In the 1880s, the railroad passed through the community of Hobolochitto.  The citizens in the community asked Ms. Poitevent to select a name for the township. She preferred the name of her paper–and Picayune, Mississippi was born.
Today, Picayune is the only city in the world to bear this unusual and historic name. A thriving city of approximately 14,000 inhabitants, Picayune is a progress-oriented city that retains its small town southern charm. Well-maintained streets, good schools, and an abundance of churches, stores and restaurants combine with a mild subtropical climate to make Picayune an ideal spot to live or visit.
The appeal of the area has always been obvious.   So much so, that in the early years of European settlements, France, Spain and England all vied for possession of the area that now encompasses Picayune and Pearl River County.  The Picayune area, long inhabited by the Choctaw Indians, was first claimed for France and called Louisiana. The first capital of French Louisiana was at nearby Biloxi, founded in 1669.
In 1763, the French surrendered all their possessions in North America east of the Mississippi to the English. At the same time, the Spanish also ceded to the English their claims to what were called East Florida and West Florida.
The Spanish reasserted their claim to the area in 1799 by attacking British forts in Baton Rouge, Mobile, and Pensacola. The area was returned to Spanish dominion until 1800 when Spain ceded the area to France.
Napoleon Bonaparte’s brother Jerome is said to have visited the area sometime during this period. Legend has it that he was headquartered on the river below Picayune – hence the name Napoleon was given to a settlement there.
Napoleon sold the area to the young United States as part of the historic Louisiana Purchase. Although the Americans claimed the area, the Spanish continued to claim that West Florida extended to the East Pearl River, and the area did not officially come under U. S. control until 1810.
In 1811, while the territory was yet the lawless abode of pirates and Indians, Stephen Jarrell became the first permanent white settler in what is now Picayune. Jarrell built a trading post on a bluff overlooking Hobolochitto Creek.
The next year, 1812, Gen. Andrew Jackson passed through the area on his way to the Battle of New Orleans, and “Old Hickory” had a young quartermaster named Moses Cook who was sent to obtain supplies at Jarrell’s post.
Cook was so taken with the area, that he returned after the war to buy Jarrell out and take over the post. When Mississippi was admitted to the union in 1817, the area of Cook’s post was included in the newly formed Hancock County.
In 1832, Cook was able to establish a post office at his stand, which he named Hobolochitto. The area grew slowly in the antebellum years and was still sparsely populated by the time of the War Between the States. Most of the able-bodied men in the area joined the Confederate Army and went away during the war, and those left behind experienced hardships inflicted by jayhawkers and the occupying Yankee soldiers.
In the years following the war, the area continued to grow. The railroad line from New Orleans to Cincinnati, Ohio was constructed through here in 1883 and greatly added to the local economy. A switching yard was located here because the trains had to be broken into smaller units before entering the hilly terrain that begins just to the north. For a time the settlement was known as Bailey Switch. In 1890, Pearl River County was formed, but it was 1908 before the area around Picayune was added to the county.
Picayune was incorporated as a township in 1904, the name having been given by Poitevent. In 1905 it was incorporated as a town, and, in 1922 it was incorporated as a city.
During the early years of Picayune, the area was in the midst of a timber boom as companies harvested the immense stands of native loblolly and southern pine. When the native timber was depleted, tung trees were brought in and planted in orchards. The nuts from the trees were harvested for their oil, used in furniture finishing and other applications.
Picayune soon became the tung capital of the world. At one time, over 100,000 acres in the county were devoted to tung orchards. Along with the tung trees, cattle became important. Cattle were used to graze the area between the trees, and cattle farming and tung orchard-growing became mutually beneficent pursuits.
The tung industry was destroyed when hurricane Camille destroyed most of the orchards in 1969. While the tung trees disappeared, the cattle stayed on and thrived. Today, beef farming is an important part of the local economy.
–Content courtesy of picayune.ms.us

Facebook
Twitter
Pinterest
Previous article
Cofield on Oxford, The Run of the Place Part I
Next article
Olive Oil, Part 1: Not Just for Dressing and More Scandalous Than Reality TV