Olive Oil, Part 1: Not Just for Dressing and More Scandalous Than Reality TV 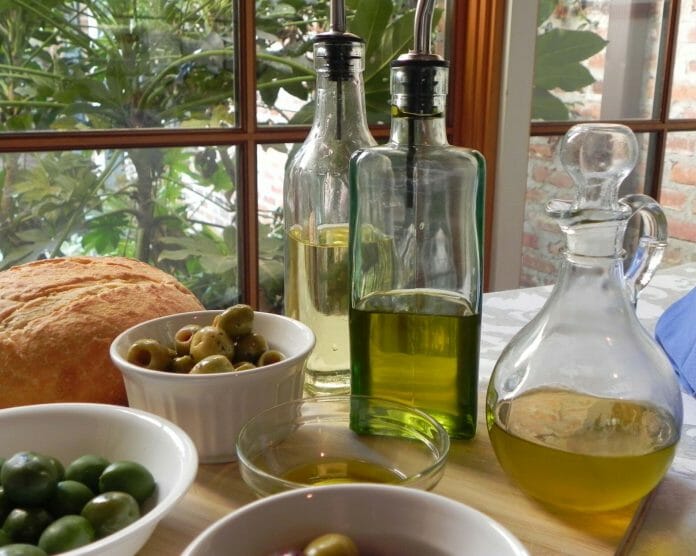 By Laurie Triplette
ldtriplette@aol.com
EDITOR’S NOTE: In this four-part series, food writer Laurie Triplette will focus on demystifying olive oil, which has been a darling of the American food world for years. Triplette claims that the world of olive oil contains as many mysteries as most Southern families hide in our gene pools.
Click on the following links for the other installments in the series: Part 1, Part 2, Part 3, and Part 4.
PART ONE: Simple Truths About Olive Oils. BEWARE.
The olive oil industry is wrought with intrigue, violence, and fraud perpetrated by both legitimate and illegitimate participants. The players range from organized crime syndicates to political and religious factions. They are not bound by national borders, and their world stage includes both European Union and non-EU countries, southern hemisphere nations, the Middle East, and even the United States.
Olive oil is big business worldwide. But it’s an increasingly costly business for the actual grower and oil producer. As a result, unscrupulous business interests have tainted the industry in their search for greater profits, making it more difficult for honest growers and small producers to survive. Misrepresentative labeling on commercially sold olive oil has become one of the biggest agricultural fraud problems in the EU and in other oil-hungry countries. Recent testing studies have shown that so-called virgin olive oils are frequently adulterated with seed oils… and sometimes poisoned with toxic substances.
People have died, and not just in fighting over disputed olive lands.
Olive oil is justifiably touted as a life-sustaining miracle substance. Acclaimed throughout recorded history for its numerous medicinal, cosmetic, culinary, and lamp-lighting qualities, this “juice” of the olive helped humanity emerge from our primitive beginnings. It’s no wonder that olive-growing lands have been (and still are) fought over.
Olives were used as far back as the Paleolithic and Neolithic periods in the Mediterranean region. During the Bronze Age (circa 3150-1200 BCE), edible olives and olive oil became the lynchpin of culinary cuisine favored by peoples populating the Mediterranean lands in what are now southern Turkey, Syria, Lebanon, Palestine and Israel. (Ancient Syrian documents indicate that by around 2000 BCE, olive oil was valued more highly than wine and seed oils.)
The Phoenicians were responsible for taking olives from the Fertile Crescent of the eastern Mediterranean to Spain and North Africa. The Greeks introduced the olive into Italy, where the Romans became obsessed with anointing themselves with perfumed olive oils. (Interesting fact: The term “Messiah” means “The anointed one.”) The olive tree became so important to civilization across the Mediterranean that the tree was considered a gift of the gods. In fact, the Greek Laws of Solon prohibited cutting down an olive tree on pain of death.
The greatest expansion of olive oil production occurred after the 1700s, when Mediterranean-area planters attempted to use poor lands to help supply growing urban populations. At the same time, northern European cultures preferred animal fats such as lard and butter because they were more readily obtainable in their colder climates.
Harvesting olives and production of high quality olive oil for food consumption are both labor intensive. Even lamp-quality olive oil is more labor-intensive to produce than lamp oil from other sources. For this reason, demand for olive oil began to fall during the late 19th century, as new extraction techniques made it possible to produce seed oils more economically, using less labor.

In the United States, the California olive farm industry dates back to the early Spanish missionaries. Like the grapes imported from Europe to make wine, the olive trees imported to make edible olives and olive oil flourished in the Southwestern soils and climate. American production, however, represents a mere fraction of the olive oil consumed annually in the United States. Hundreds of domestic and imported oils are now available to American consumers. We import more than 60 million gallons of olive oil each year.
The United States ranks fourth among nations in olive oil consumption, even though olive oil represents only about 8 percent of all fats and oils consumed here. The average American consumes about 0.7 liters per year, compared to the oil-hungry Greeks, who consume 26 liters a year. The Spanish, whose olive industry is the largest in the world, exceeding even Italy, consume 15 liters annually, and the Italians consume 13.5 liters each year.
According to writer Tom Muller, in his 2012 exposé of the olive oil industry, Extra Virginity. The Sublime and Scandalous World of Olive Oil ( New York, NY: W.W. Norton & Company, 2012), honest olive oil makers cannot compete with the cut-rate prices charged by large suppliers of refined olive oils adulterated with seed oil and presented as virgin oils. Such oils are sold by the tanker-load to major food companies around the world, including the United States. Perhaps even more scandalous is that no mandatory federal-level testing system is in place to identify residues of insecticides and other carcinogens in those tankers.
The ever-present potential for contamination by toxic substances isn’t the only problem dogging the olive oil retail sales industry. Once the oil leaves the transport vehicles, it is handled by the bottler/packager who often omits testing the product.

Here’s a rundown on recent tests of packaged olive oils:
The International Olive Commission’s 2013 workshop on olive oil authentication revealed that one in four olive oils sampled in Spain and nearly one in three sampled in Canada failed official fraud tests.
Since 1997, more than 20 percent of all olive oils tested by the Canadian Food Inspection Agency (their version of our Food and Drug Administration) have been proven to be cut with seed oils.
The University of California-Davis Olive Center, in cooperation with the Australian Oils Research Laboratory, conducted a recent survey of supermarket extra virgin olive oils. They found that 69 percent of oil tested had taste flaws that should have graded them far below extra virgin.
Similarly, the Australian Olive Association (AOA) tested every brand of extra virgin olive oil imported in 2012 and found that not one met their national standard for certification as extra virgin.
The percentage of adulterated oils is still under debate. What is not debatable is that olive oil adulterated with peanut oil or soybean oil poses a health hazard for those of us who are allergic.
One of the most notorious instances of adulteration led to tightening of standards within Italy. Italian oil was sold in Spain in 1981 as extra virgin olive oil. It contained canola oil adulterated with aniline intended for use as an industrial lubricant. Later called toxic oil syndrome, almost 700 people died of poisoning from the aniline. That was more than 30 years ago, yet even now, contamination of internationally transported olive oils by toxic substances is not as rare as consumers would like to believe.
The U.S. Department of Agriculture (USDA), still has only a voluntary Quality Monitoring Program for olive oils. To date, only Pompeian (the second largest bottler in the United States) has agreed to participate in this monitoring program.
Here’s a disturbing fact about olive oil: Less than 10 percent of all olive oil production worldwide meets the criteria to be labeled as extra-virgin. Yet standards agencies in many countries estimate as much as 50 percent of all olive oil sold at retail is labeled “extra virgin.”
The math doesn’t add up.
NEXT, PART 2: Demystifying the Grades of Olive Oil
Laurie Triplette is a writer, historian, and accredited appraiser of fine arts, dedicated to preserving Southern culture and foodways. Author of the award-winning community family cookbook GIMME SOME SUGAR, DARLIN’, and editor of ZEBRA TALES (Tailgating Recipes from the Ladies of the NFLRA), Triplette is a member of the Association of Food Journalists (AFJ),Southern Foodways Alliance (SFA)  and the Southern Food and Beverage Museum (SOFAB). Check out the GIMME SOME SUGAR, DARLIN’ web site: www.tripleheartpress.com and follow Laurie’s food adventures on Facebook and Twitter (@LaurieTriplette).