The Fire Within the Youngest Rose Parade Float Designer Ever

When I deliver my motivational presentation ‘Stoke the Fire Within’ I talk about caring deeply and seeking excellence. Many of us are among the tens of millions who watch the breathtaking Tournament of Roses Parade every January 1st. The people that design these incredible floats are extremely driven.

Paradiso Parade Floats Owner Charles Meier, 35, holds the title for the youngest designer in Rose Parade history. Meier worked on his first design in South Pasadena in 1992 when he was just 13. Meier has entered 10 floats in the parade since then. He has a fire within for making the best floats possible, and it goes way back.
Meier pulled his first all nighter when he was 11 years old. His mother found him asleep in a flower box.

It was the night before final judging for the 1990 Rose Parade. Meier, a volunteer, had been running around for hours helping float decorators fill vials of water, scrape seeds and glue last-minute details. Exhausted, he finally crawled into a box that still smelled of orchids.
Meier first fell in love with the parade when he was 9 sitting in the grandstands in seats his parents had won in a raffle. He loved the marching bands and creative floats. What really got him was all the color!
He started drawing floats that day. He studied flowers, memorized parade brochures and, with his parents taking him, joined float decorating committees as a 9 year old. He put a green blanket over his jungle gym and started stuffing flowers into it.
Every year, he submitted designs to his hometown float committee. On his 13th birthday, South Pasadena selected his drawing! Meier set the record as the youngest designer in Tournament history, creating his first float at age 13. Over the last two decades, Meier earned awards for over 92% of his designs – the highest prize-winning rate in the industry.
Meier has the tenacity to pay attention to details, Paradiso float worker Gwen Robertson said she remembered working with him in the middle of the night on Sierra Madre’s “Bollywood Dreams” float for the 2009 parade.

“We were in the pouring rain, decorating outside,” Robertson said. “I was decorating the head of the bird. Charles said, ‘The eye needs a glint. It needs three pulverized grains, not four.'”
He was right, she said. Four looked messy, but three made the perfect glint.
What I have found in peak performers is that constant determination to make their product the best it can be, and to always be looking to come up with something that knocks the socks off people! 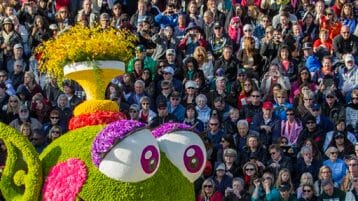 Just a few months ago, at the 125th Tournament of Roses Parade, his Public Storage float, “Adventures in Space,” would be the first double-decker float and the first put together with independently functioning pieces ever to make its way down Colorado Blvd. in Pasadena.
Viewers on the street went goo goo gah gah when the huge rocket ship with a crew of three aliens began to open with steam all around. A ramp came down and three aliens popped out in separate floats. They drove around and back up in. The float won the Grand Marshal’s trophy for Excellence in Creative Concept and Design.
In a recent interview with the Sierra Madre News, Meier said something that I feel is one of the powerful reasons to see the Tournament of Roses parade at least once in your lifetime!
“Well…something that I’ve said before to people is that one of the things I find so delightful about the Rose Parade is that it’s a display of extravagant beauty, for no good reason, at all. And I think that’s something that people need, it’s something that I need. Just to be reminded that there is beauty in the world.” Charles Meier, Float Designer.
Gosh, that hits home. We get so busy and wrapped up in things that sometimes we just need to be reminded that there is beauty in the world….