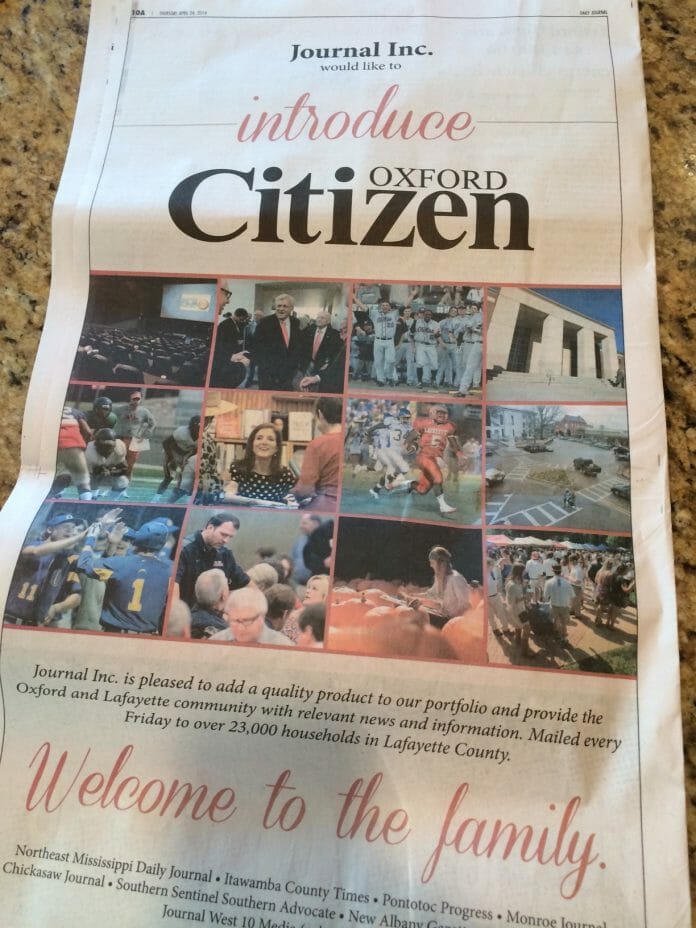 As of today, Oxford is a three-newspaper town — the new Oxford Citizen weekly, the soon-to-be-sold Oxford Eagle and the Ole Miss-operated Daily Mississippian.
This comes to pass in a national newspaper climate in which even major metropolitan areas find it impossible to maintain two daily publications.
The Oxford Citizen is owned by Journal, Inc. (formerly known as Journal Publishing Company, which also owns eight weekly community newspapers in Northeast Mississippi.) These include the The Itawamba County Times, the Pontotoc Progress, the Southern Sentinel, the Chickasaw Journal and the New Albany News-Exchange.
The Journal, Inc.-owned Northeast Mississippi Daily Journal is the largest daily newspaper in northeast Mississippi. First published in 1872, It is based in Tupelo.
The company’s move into Oxford raises two compelling questions:
1. How will it impact the Oxford Eagle, reportedly in final talks with the Boone Newspapers Group, based in Northport Ala., and founded by Tuscaloosa-based James B. Boone Jr.?
2. Is it in Oxford’s best interest for large outside businesses to control local news access?
“I’m less concerned about the source of ownership as I’m concerned about the resources that will be applied,” said Debroah Winger, associate professor and director of undergraduate journalism with the Meek  School of Journalism and New Media at Ole Miss. “Will corporate owners bring in more staff and devote more reportage resources so local news gets covered more comprehensively? Or, will out-of-town corporate owners insist on feeding us more filler pieces and rehashed news that leads to less local reporting”
Winger added that most Americans today consume their news from non-local sources, including on-line outlets such as HottyToddy.com.

Another issue with increased competition is the battle for the advertising dollar.
Local merchants have told HottyToddy.com they doubt the economic base can support another newspaper.
Putting a fine point on that issue, Journal, Inc., in addition to the Citizen, will print a weekly shopper (publication made entirely of advertisements).
The debut issue of the Oxford Citizen was mailed to all 21,600 Lafayette County households, a major financial expenditure given postage costs.
Observers say the newspaper and shopper are efforts by Journal Inc. to blunt the arrival of the Boone group, which controls newspapers throughout the South, and which industry observers speculate may be building an SEC-town network of newspaper outlets with the headquarters in the heart of Crimson Tide territory.
Andy Knef is the editor of HottyToddy.com. If you want to contact Andy about his story, go to Andy.Knef@Hottytoddy.com.
Facebook
Twitter
Pinterest
Previous articleBelles & Beaus Has All the Summer Outfits for Youngsters
Next articleUpdate: Blind Pig Flowing Freely