Located on the third floor above Highpoint Coffee, overlooking the picturesque Oxford Square, Pure Barre is a fitness oasis.
The beautifully appointed facility is the newest way to unwind and take a mental break from the daily grind, while burning calories, of course. 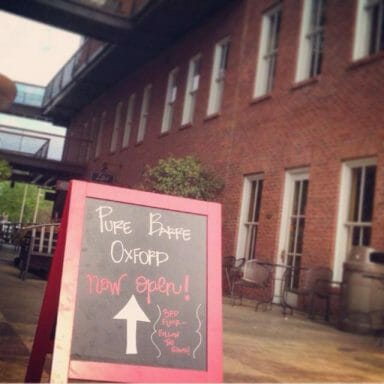 Pure Barre Oxford officially opened its doors on Monday, bringing a new form of exercise and empowerment to the community. Pure Barre is a low-impact form of exercise that lifts and tones muscles while burning calories and fat.
Pure Barre Oxford co-owners Madison Newton and Kelly Waite come from very different backgrounds, but found each other and an incredible friendship through Pure Barre in Birmingham, Ala. After teaching classes and working out together, the two decided the next step was to open their own studio.
So how does a workout class empower women?
“We have a good mix of people who have tried (Pure Barre) and those who have no clue what it is,” Waite said. “Our goal is to empower and encourage women to look and feel their best, both physically and mentally.”
Waite is an Ole Miss graduate, a Rebelette alum, and wife of former Rebel catcher Charlie Waite. After college, she moved to California, where she attended her first Pure Barre class and was immediately hooked.
Newton is from Lexington, Ken. and attended the University of Kentucky before securing a “big girl job” in marketing and event planning. That was seven years ago. It didn’t take long for Newton to make a career change and become a full-time Pure Barre instructor.


Both women moved to Birmingham. The stars seemed to align and timing was on their side, they agreed.
“I was a gymnast and she was a dancer,” Newton said. “We were both athletes on team sports, so the very personal, small-group setting (of Pure Barre) really appealed to us.”
When asked why they chose Oxford to open their first studio, Waite said it was an easy choice. She combined her love of Oxford with her love of Pure Barre to create a new career journey to empower and uplift women, she said.
“It’s a really cool community,” Newton said. “There’s so much variety. It’s a small town, but it’s growing rapidly.”
So, the big question becomes: What is Pure Barre? According to Newton and Waite, it drills down to a 55-minute group class that focuses on the core, isometrics and closely resembles Pilates. The thought of a ballet bar in an exercise studio may be intimidating to some, but both women maintain that as long as you can stand next to a bar, you can use it to work out.
Waite said Pure Barre focuses specifically on the women’s physique, which many exercise classes and programs don’t do today.
The goal is to create long, lean muscles by fatiguing one muscle group at a time. Newton said that although the format to each class is the same, with a warm up and cool down, you’ll never take the same class twice.
“You learn to challenge yourself, no matter how long you’ve been doing it,” Newton said.
Both women agree that there is no down side to Pure Barre because it’s low-impact and the classes are very personal. Instructors pay close attention to form so each attendee experiences the best workout possible.

“My favorite part of class is when the studio doors close and the warm up starts,” Pure Barre studio owner Madison Newton said. “I know the next 55 minutes are about me and I’m about to get the physical work and the mental break I need to take on the day.”
In their first few days, Waite and Newton have noticed women from all walks of life, ability and fitness levels attend class, vowing to return.
In addition to offering an intense, life-changing exercise routine, Pure Barre Oxford also sports a retail side. Waite and Newton said the clothes sold in the studio let them express their creative energy and share their love of fashion.
“We want to inspire you to take care of yourself,” Waite said. “You’re going to feel good when you look good, and clothes are a big part of that.”
So, if you’re looking for a new exercise program or just some you-time, visit Newton and Waite at Pure Barre Oxford, located at 265 North Lamar Blvd., Suite E. To learn more about Pure Barre, visit www.purebarre.com. Also, schedule your first class, which is always free, at www.purebarre.com/ms-oxford/. Also, visit Pure Barre Oxford on Facebook HERE.
– Kate Wallace, Managing Editor, HottyToddy.com, kate.sinervo@hottytoddy.com
– Photos courtesy of Pure Barre Oxford’s Facebook page.
Facebook
Twitter
Pinterest
Previous article
In the News: Oher Shares Time With Kids At St. Jude
Next article
Belles & Beaus Has All the Summer Outfits for Youngsters