Wine Tip of the Week: The Big Chill

Editor’s Note: This is an excerpt from author John Hailman’s book ‘The Search for Good Wine’ which will be available for purchase September 2014 from the University of Mississippi Press. This particular chapter was written on July 30, 1989.
The temperature at which you should drink wine is partly a matter of opinion, but it will greatly affect how much you enjoy it. If you don’t believe me, try drinking warm beer. Or serve it to someone expecting cold beer. (On the other hand, the English actually like warm beer.)

Tradition says white wines should be served colder then reds. And with wines, tradition usually counts for something even if we no longer recall where it came from. The best teacher, or course, is experience, but experience can be harsh. Drinking warm whites and cold reds is sort of a vinous boot camp: good to have behind you, but nothing to repeat.
Wine books’ descriptions of ideal serving temperatures are tricky to understand. “Room” temperature in the United States is more like 75 degrees, while in France- and especially in England, where most of these rules were first written down -it is more like 62 degrees.
Thus, most red wines – especially in summer – are served too warm in the United States. Wine that is too warm tastes more tannic, astringent and alcoholic than wine that is cooler. Putting your bottle in the refrigerator 10-15 minutes should help.
A calculating mind
Trying to convert Celsius temperatures into Fahrenheit is another great source of bafflement for me. Unfortunately, too many wine guides are written in Celsius, and even when I can remember the formula I hate doing the math. So here’s a rough but handy guide to temperatures that are about right for typical white and red wines. 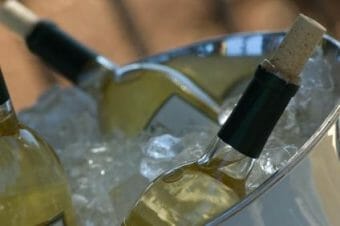 For white wines, use 13 degrees Celsius and 55 degrees Fahrenheit. Just remember the bad luck number 13 and the 55-mile speed limit. Serve red wines at 18 degrees Celsius and 65 degrees Fahrenheit. That’s 18, just like the age at which you once were allowed to buy beer, and 65, as in … Come to think of it, it might be easier to do the math.
Some practical tips: If your champagne is warm and your guests are arriving, it is faster to chill it in ice-cold water than nestled in ice cubes. For some reasons, wines- unlike beer- don’t take well to being served in iced glasses. Besides, that’s just not generally done, although Thomas Jefferson and the other Founding Fathers used to do it. They even had specially-made wine-glass chillers.
To test a wine’s temperature, use a clip-on thermometer, which costs less than $10 at most wine-supply stores or mail-order places. These thermometers are nearly always in Fahrenheit, and they generally have easy-to-read digital faces.
Other rules of thumb: Burgundies taste better a little cooler than Bordeaux, and they say sweet wines can be chilled more safely than dry ones. It is neither a sin nor a misdemeanor to chill teds, but normally only the lightest and youngest are chilled much below 65 degrees.
My favorite fast cooler is a gadget called Winechiller, a sort of metal coil device hidden in a black plastic box filled with ice cubes. You pour the wine in warm at one end, wait 30 seconds, and pour it out cold via a spigot at the other.
A silver ice bucket is OK, I suppose, but it looks better when it isn’t sweating. To prevent this, wrap it in a clean white towel- but that only hides your expensive silver. So it’s better to use the simple black steel ice bucket that is shaped like an upside-down top hat. It’s much cheaper, but looks spiffy enough to not only go with champagne.
When all is said and done, wine temperature is a matter of personal taste informed by experience, and most people’s experience says that you chill whites, not reds. The differences are no1 radical, but a small change in temperature can mean a large change in taste. You might say wine temperature is just a matter of degree.