A Story to Remind Us to Treasure Each Precious Day

When I deliver my program on the power of attitude, one of the things I do is share tools that one can utilize throughout a day to stay as positive as possible. 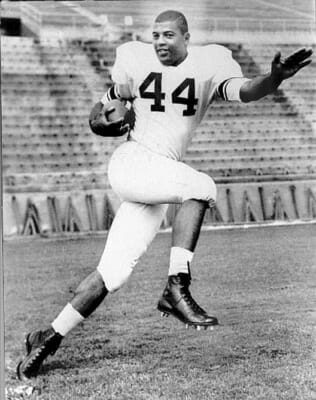 One is to take life one day at a time and to treasure the fact that we have that day.
Ernie Davis had far too few of them.
A few years ago when Hollywood made a movie of his life, I saw that the theaters in my town were not playing it but that it was being shown at a theater 30 miles away. I got my two oldest kids and took them because I wanted them to know about this remarkable man.
In many ways he was very much the same pioneer as Jackie Robinson, the first black man to play in the Major Leagues.
In the late 1950’s Ernie he was a sensational high school running back that every college tried to recruit. He signed with Syracuse where he broke most of the legendary Jim Brown’s rushing records. “He’s the kind of runner you hate to coach against,” Penn State coach Joe Paterno once said. “You can’t instruct a boy to tackle a man if he can’t catch him.”
Born in 1939, his parents separated at an early age. His father was killed in a car accident, and Ernie ended up being raised by his grandparents who were very poor. He stuttered as a child, but overcame that as he started being asked to give speeches once he became a sports star. His solution was to constantly read aloud from books by himself in his room until he no longer stuttered.
Ernie faced racism his entire time at Syracuse. At the 1960 Cotton Bowl, Syracuse made reservations at the Hilton Hotel in downtown Dallas. When they got there the hotel would not allow black players in. The team had to move to a low level motel way out north of Dallas and even there Davis was forced to stay in sub-standard rooms near the hotel kitchen.
Ernie ended up being named the most valuable player of the game, but at the banquet that night was told he could get the award but could not stay to eat. The entire team protested by not going to the banquet. 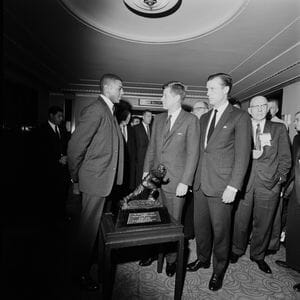 Ernie was named the Heisman Trophy winner in 1961, the first black man to win it. The day he was honored at the Downtown Athletic Club in New York, he had a chance encounter with President John F. Kennedy, who also was in the city. Kennedy was such a fan, he asked for a meeting with Davis (photo below). The President went up to him and said, “Hi, I’m Jack Kennedy. So pleased to meet you!”
After his senior season, Ernie became the first black man to be selected 1st over all in the NFL Draft. He was all set for what would have been a Hall of Fame career with the Cleveland Browns. At 6’2″ and 210 pounds, he was fast, strong and unstoppable.
Then his gums started bleeding. He started having nose bleeds. He was diagnosed with a highly toxic form of leukemia.
In March 1963, while in remission, Ernie wrote an article for The Saturday Evening Post in which he said this:
“Some people say I am unlucky. I don’t believe it. And I don’t want to sound as if I am particularly brave or unusual. Sometimes I still get down, and sometimes I feel sorry for myself. Nobody is just one thing all the time. But when I look back I can’t call myself unlucky. My 23rd birthday was December 14. In these years I have had more than most people get in a lifetime.”
Two months later, he died, at the age of 23. 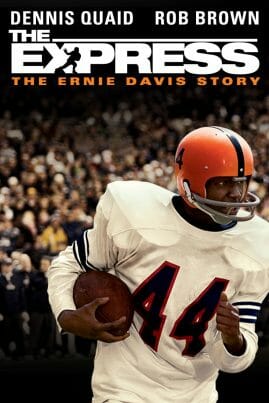 He never said once, “Why me?” He never pitied himself. This was a young man who had overcome stuttering and who had not been allowed to eat in certain restaurants because of the color of his skin.
This was a young man that as the leukemia was wearing him down and causing him to go in and out of hospitals, he went to the owner of the Cleveland Browns and apologized for racking up medical bills.
He never played a down in the NFL, but because of his character the Cleveland Browns retired his #45 jersey.
Ben Schwartzwalder, his football coach at Syracuse, said, “I never met another human being as good as Ernie.”
Hollywood made a movie of Ernie’s life called “The Express.” Dennis Quaid stars as Coach Schwartwalder. It is a very good movie. If you can, I suggest you rent it however you rent movies these days. One of the ways be build and keep positive attitudes is by taking the time to watch stories like the movie on Ernie. We come away inspired and more grateful for the many days we have been given in life.