On Cooking Southern: Celebrate Cinco With a Bit of Mole and More 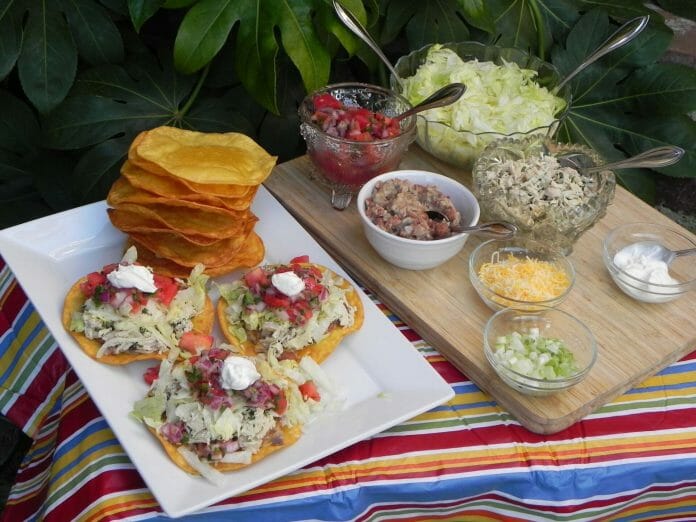 By Laurie Triplette
ldtriplette@aol.com
Southernism of the Week:
Holy Moly: An emphatic expression of surprise, interchangeable with Holy Smoke, Holy Cow, or Holy Mackeral! Known as early as 1892 as a rhyming compound like killer-diller and legal eagle (Holy had been used as an expletive intensifier since 1837), the phrase was used by Captain Marvel in the 1940s comic books, and became popular in Mexico to describe sauce so hot it could sear one’s insides. Esoterics claim the term derives from Homer’s Odyssey, describing a magic herb with black roots and white flowers given to Odysseus by Hermes to ward off Circe’s spells. Uh huh.
HAPPY CINCO DE MAYO, CHICKEN AND CHOCOLATE STYLE
The Old Bride should be dancing HAPPY CINCO DE MAYO. Instead, I am in mourning. Thanks to the OTHER Knights Templar capitalizing on a perfect storm of natural disasters, it’s the year of the great lime shortage.
Florida was once the U.S. center of lime growing, but the state’s lime orchards were decimated around 2001 by citrus disease. The crop simply doesn’t do well elsewhere in North America, except for a narrow strip in Southern California. Consequently, more than 90 percent of limes consumed in the U.S. are imported from central Mexico’s Tierra Caliente region, primarily from the state of Michoacán, where lime groves flourish. 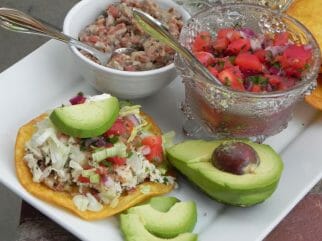 But the Knights Templar crime cartel seized control of the majority of lime orchards after gaining power over the states of Michoacán, Guerrero, State of Mexico, and Morelos in 2010. Until recently, they were estimated to be extorting as much as $1.4 million per week from legitimate area businesses, primarily the lime and avocado growers and the agricultural wholesale distribution centers. They squeezed the farmers and ran up current lime prices as high as $130 per case of 200.
Mexican farmers from the region have reacted strongly, taking up arms to rout the criminals. As of today, they’ve taken out all but one Templar leader. The Mexican military has cited May 10 as the date for finishing the cartel cleanup and for vigilantes to lay down their arms. Couple this with Mother Nature — the past winter’s extreme weather throughout the western hemisphere wiped out much of the crop — and consumers in the United States and Mexico won’t reap the benefits of the cartel elimination until after the next growing season.
So for now, our gin and tonics, guacamole, salsas, margaritas, and ceviche might have to be flavored with lemons instead of limes. Aagh.
As my friends Down Further South say, “¡Así es la vida!”
That’s why our current Cinco de Mayo recipes focus on what we can accomplish with minimal lime use. Let’s talk chicken and mole sauce.
True Mexican cuisine features chicken, turkey, pork and goat, along with beans and corn products — all seasoned with chiles, herbs and spices such as cinnamon, cumin, cilantro, and with cacao and citrus. Cheeses tend to be fresh soft cheeses such as queso fresco, the Mexican equivalent of the Greeks’ feta.
One of our recipes is a simple open-faced tostada, containing layers of homemade refried beans, lime-marinated chicken, and cheese. The other dish is an enchilada composed of spiced chicken seasoned with mole sauce (pronounced mo-lay).
Classic mole sauce, composed of chocolate, chiles and other ingredients, is one of the most significant sauces of the many cultures in that fascinating country. A true, old fashioned mole of any type (and there are hundreds), can require days of preparation for roasting and toasting seeds, spices, and nuts, plus grinding and combining dozens of ingredients.
Mole is said to have originated in Puebla, Oaxaca or Tlaxcala during the Spanish Colonial period. According to one legend, the archbishop was scheduled to visit the Convent of Santa Rosa in Puebla, and the convent nuns had little food to prepare. They prayed and combined bits of chiles, spices, day-old bread, nuts, and chocolate; killed an old turkey, and sauced the roasted bird with the mixed-up sauce. The archbishop loved the dish, and the nuns told him they had made a Mole (an ancient meso-American Indian word meaning “mix”).
A similar legend attributes the dish to the Puebla monk, Fray Pascual, and other versions substitute the New Spain viceroy in place of the archbishop. At any rate, modern mole combines elements of North America, Europe and Africa, all built upon a Nahuatl concoction of chili sauce called molli (chillmolli).
The term mole most often refers to thick, brownish-red sauces, but can be more general, applying to sauces ranging from bright green, or red, yellow or black, and with consistency as thin as soup to as thick as a paste. Various moles are combined with fowl, fish, or pork. Considered one of the most representative of all Mexican dishes for major celebrations, homemade mole is a dying art form due to the elaborate preparations needed.
Our mole sauce is a hybrid version, depending on dried ancho chiles, which are essential to most moles. The Old Bride found a plentiful supply of dried ancho chiles at the North Lamar Farmer’s Market in Oxford, along with another needed ingredient, Abuelita Mexican chocolate wafers (also available at Walmart), which are similar to the Ibarra brand of Mexican chocolate wafers. These chocolate wafers are Mexico’s equivalent to our semisweet baking chocolate squares, albeit grainier and with additional spices. Note: This is not a flavor familiar to our Norteamericanos’ tastebuds. Mole is earthy and an acquired taste.
CHICKEN TOSTADAS 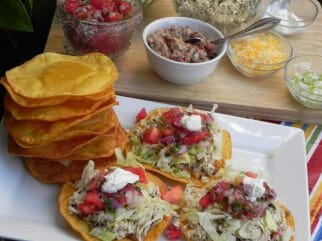 These are dynamite due to the combination of lime, cilantro and olive oil on the chicken, plus the homemade rustic refried beans with the crude salsa.
The Chicken:

3 c cooked and shredded chicken (about 3 to 4 breasts)

Combine the shredded chicken in a large mixing bowl with the lime juice, olive oil and cilantro. Toss to mix, add salt and pepper to taste. Set aside.
The Refried Beans:

15.5-oz can of pinto beans, rinsed and drained

Heat oil in skillet over medium-high heat. Add onion, coriander, and cumin and sauté, stirring, about 2 to 3 minutes. Add garlic and stir until mixture begins to caramelize. Mix in the beans; use potato masher to lightly smash the beans. Add warm chicken broth and stir gently. Cook about 4 to 5 minutes, until mixture thickens. Add salt and pepper to taste. Set aside on warmer.
The Salsa:

Juice of one lime

Combine mixture in non-reactive bowl. Refrigerate until ready to use.
Tostadas Preparation and Assembly:

Prepare the tortillas by pouring oil into large frying pan to depth of about 2 inches. Bring oil to a low boil (about 375˚F_. Fry one tortilla at a time in the heated oil, about 30-45 second on each side, using tongs to flip. Transfer the crisp-fried tortillas to paper towel-lined rack to drain.
Preheat broiler oven. Spread beans evenly over top of each crisped tortilla. Sprinkle cheese evenly over top of the beans. Broil until cheese has slightly browned and melted (about 30 seconds). Remove from oven and mound chicken on each. Spread shredded lettuce over the chicken and embellish with avocado slices. Top each with salsa and a dollop of sour cream. Sprinkle green onion as garnish.
CHICKEN ENMOLADAS (ENCHILADAS WITH MOLE SAUCE) 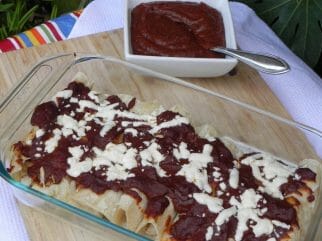 Whatever the cook can do to expedite steps is acceptable. Feel free to use rotisserie chicken.

3 to 4 oz of chipotle peppers in adobo sauce

Reconstitute the dried ancho chiles by soaking in boiling water in a bowl for 30 minutes. Drain, remove any remaining seeds and stems, and set aside.
Heat olive oil in skillet and add the onion, seasoning with salt to taste; sauté until translucent. Stir in garlic and cook 2 additional minutes. Cool about 5-10 minutes until warm but not hot.
Transfer reconstituted chiles, peanut butter, crumbled tortilla chips, chipotles, and sautéed onion, garlic and oregano to a blender. Add warm chicken stock and blend until very smooth.
Transfer sauce to sauce pan and bring to a boil over high heat. Reduce heat to medium once it reaches a boil; cover pot, and simmer about 20 minutes. Stir in the chopped chocolate. Season with salt and pepper. Set aside but keep warm.
Spray nonstick cooking spray on tortillas to soften. Wrap in paper towel and microwave for 30 seconds to soften and warm the tortillas. Place shredded chicken in cigar shape down center of each tortilla, being careful not to overfill. Drizzle very small amount of mole over chicken and sprinkle with fiesta cheese. Roll the tortillas carefully. Place in a 7-by-11-inch pan, fold-sides down. Drizzle mole over the enchiladas and top with sprinkles of queso fresco.
Bake at 350˚F in preheated oven for about 20-25 minutes, until enchiladas are heated through and sauce is bubbly. Sprinkle with additional queso fresco, and add dollops of sour cream.
MOLE-MAKING PHOTO GALLERY: