How We Can Be Inspired by Ruth, the Age Defying Zip Liner

Ruth Ziems is approaching 90 years of age. A few months ago she wrote me and said that for years she has wanted to zip line in Costa Rica. When she learned I was going to host a group inspirational trip through there and the Panama Canal she signed up for the trip and then to zip line!

Ziplining is an adventure thrill ride. It is a gravity-fueled conveyance using cables and pulleys threaded between two points (photo below).

As the trip approached, some of her friends asked her if she was worried a cable would snap and she would fall to the ground. “Not a bit,” she said. “God decides when my time is up and if it’s then, so be it!”
Ironically, a 60 year old man named Mike (on left) on the trip had always thought about zip lining, but was scared of it. When he learned Ruth was going to, he signed up. 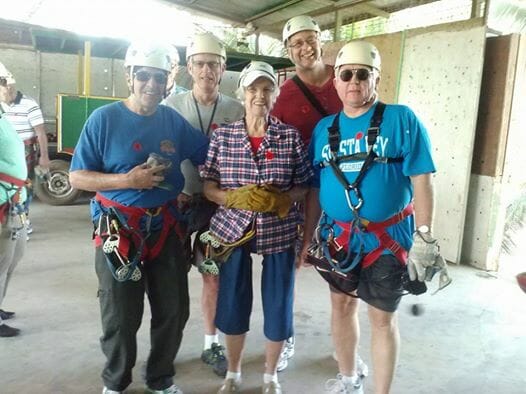 After getting all ‘cabled up’ and learning the proper zip lining form, we headed for the tree tops. The course ran near a river filled with crocodiles. As you will see in the video down below that I produced, Ruth was positive and calm the entire way. The first time I ever went zip lining (in Juneau, Alaska) I was a nervous wreck as I am scared of heights, but Ruth was cool as a cucumber.
“I have always tried to be positive about everything,” she told me. 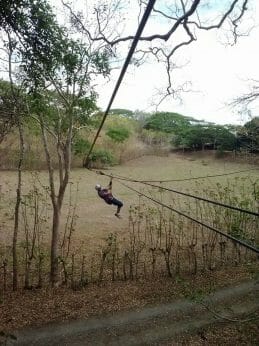 Ruth soared from tree to tree. One of the stages was 300 yards of high speed. She put on the cable breaks just right at the end and landed on the tree stand like a bird.
Near 90, the walking up hills go to her. In a wonderful example of customer service, the guide would sense this and stop for awhile and tell stories about the wildlife of Costa Rica to Ruth. After a few minutes she was ready to go again!
Accomplishing special things takes team work and Ruth was quick to point out there was no way she could have done this if not for the help of three men from our group that helped her up hills.
We all need help in life.
I took the picture above after Ruth had gone through all ten stages. Everyone in the group, including guides like the one on the right, marveled at what she just done. One manager told me no one her age had ever made it through all ten stages.
Ruth was born almost nine decades ago to a farming family. She has traveled all over to places like Japan, France, Switzerland and Point Barrow, Alaska. Her next adventure? Hot air ballooning.
“I’m not doing bungee jumping though,” she said matter of factly.
A positive attitude through her whole life has been a foundation of the rich life she has lived.


While she hopes others can travel like she has, she hopes one place they don’t go is Someday Isle.
“Someday I’ll train for that first 5K or someday I’ll take steps towards achieving this dream or that goal…”
“I think if you want to do something in life then do it,” Ruth told me. “Don’t get to later in life and have regrets!”
A quote by Satchel Paige comes to me when thinking about Ruth – “How old would you be if you didn’t know how old you are?”
Also, one by Marv Levy – “Chronological age is only an approximate indicator of functional age.”
Below is the video I produced of Ruth taking on Zip Lining in Costa Rica! When I was videoing I got excited because I knew it and her approach to life would inspire so many others. It is my hope she stokes the fire within an unmet challenge in all of our lives!

VIDEO! Approaching 90, Ruth zip lines Costa Rica!
No doubt, I will be talking about Ruth in future ‘Stoke the Fire Within’ presentations!
Please share her inspiring approach to life with others. 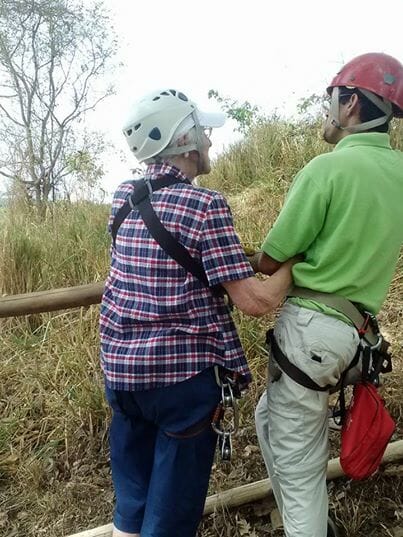 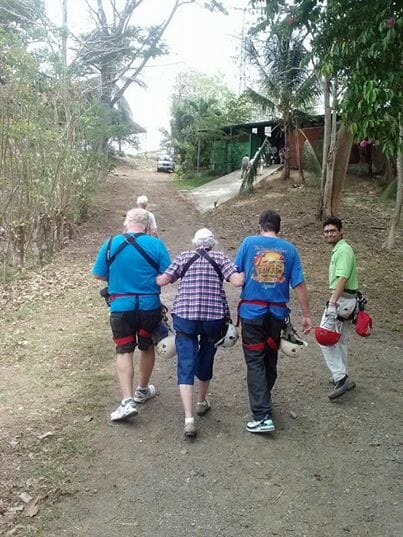 Charlie Adams is an Oxford native, graduate of Lafayette High School and a member of the Ole Miss Class of

1985. Adams is the author of 4 books on positive attitude and peak performance, including 2013′s “How to Build a Positive Attitude and KEEP the Darn Thing!!” and “Stoke the Fire Within.” His books and motivational keynotes and seminars are designed to make sure events reach their objectives and to help create winning cultures. Email him at:Charlie@stokethefirewithin.com.