Music of ABBA featured in smash performance that is nearly sold out for Mother’s Day
The Broadway hit that more than 54 million people around the world have fallen in love with is coming to the Gertrude C. Ford Center for the Performing Arts at the University of Mississippi. “Mamma Mia!” will be performed at 3 p.m. Sunday (May 11). 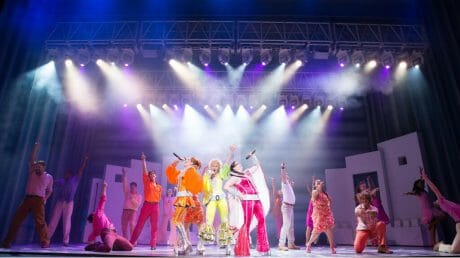 Limited tickets, priced at $55.50 to $66.50, remain available for the show. For ticket availability, call the UM Box Office at 662-915-7411 or visit https://www.fordcenter.org/.
The performance will close out the Ford Center’s 2013-2014 season, during which it marked 10 years as north Mississippi’s premier performing arts center.
Written by British playwright Catherine Johnson, “Mamma Mia!” follows a daughter’s quest to discover the true identity of her father on the eve of her wedding, which leads to three men from her mother’s past coming back to the Greek island they last visited 20 years ago. Since its London debut in 1999, the show has grossed $2 billion worldwide.
“Mamma Mia!” is based on the songs of ABBA, a Swedish pop-dance group that hit it big worldwide in the 1970s and ’80s to become one of the most popular groups of all time. The quartet’s blend of pop melodies and lavish harmonies helped the group sell more than 400 million records around the world.
The musical includes such hits as “Super Trouper,” “Lay All Your Love on Me,” “Dancing Queen,” “Knowing Me, Knowing You” and “Take a Chance on Me.” A film adaptation starring Meryl Streep was released in July 2008.
– Ole Miss News Desk