The Town B.B.King Calls Home
When most people stroll into Indianola, MS, they’ve got two things on their mind- Mississippi Blues and B.B. King. As the placewhere Riley B. King grew up and later claimed as home on stages around the world under his new name “Beale Street Blues Boy” – B.B. – King, and stocked with blues joint after blues joint, Indianola draws blues enthusiasts who travel the globe to experience the history of blues music in this small Mississippi Delta town.
B.B. King Museum and Live Blues 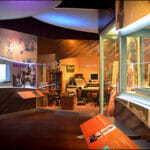 The $15+ million, state-of-the-art B.B. King Museum and Delta Interpretive Center honors the history of blues music and the cultural heritage of the Mississippi River Delta while telling the story of King’s life through interactive exhibits, videos and artifacts.
Two blues venues, the historic Club Ebony and the nationally-known 308 Blues Club and Cafe, host the very best of local and regional blues, rock, country, and hip-hop acts. These original juke joints offer that “smack-you-in-the-face” blues vibe that can’t be duplicated or reproduced anywhere else.
The annual B.B. King Homecoming Festival draws the man himself into town — where he and his band play for free to benefit the Museum and the town — and is one of the most popular Mississippi blues festivals.
Blue Biscuit Bungalows and Delta Dining 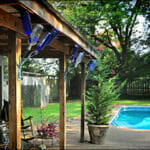 Indianola’s Blue Biscuit Bungalows offer just the right amount of history, blues music authenticity and comfort without skimping too much on the lodging amenities.
Bed on the Bayou provides the authentic experience of staying in a renovated tenant house straight off the plantation.
Indianola is also home to several celebrated eateries including The Crown Restaurant in historic downtown. Featured in Bon Appetit, the Food Network and other national media, The Crown is just one of Indianola’s dining delights.
History of Indianola, Mississippi
Indianola is a city in Sunflower County, Mississippi, in the Mississippi Delta. The population was 12,066 at the 2000 census. It is the county seat of Sunflower County
The town was originally named “Indian Bayou” in 1882 because the site along the river bank was formerly inhabited by a Choctaw Indian village. Between 1882 and 1886, the town’s name was changed from “Indian Bayou” to “Eureka,” then to “Belengate,” and finally “Indianola,” which was allegedly in honor of an Indian princess named “Ola.” The town population developed at this site due to the location of a lumber mill on the river.
In 1891, Minnie Cox was appointed postmaster of Indianola, becoming the first black female postmaster in the United States. Her rank was raised from fourth class to third class in 1900, and she was appointed to a full four-year term. Cox’s position was one of the most respected and lucrative public posts in Indianola, as it served approximately 3,000 patrons and paid $1,100 annually—a large sum at that time. White resentment to Cox’s prestigious position began to grow, and in 1902 some white residents in Indianola drew up a petition requesting Cox’s resignation. James K. Vardaman, editor of the The Greenwood Commonwealth and a white supremacist, began delivering speeches reproaching the people of Indianola for “tolerating a negro [sic] wench as a postmaster.”
Racial tensions grew, and threats of physical harm led Cox to submit her resignation to take effect January 1, 1903. The incident attracted national attention, and President Roosevelt refused to accept her resignation, feeling Cox had been wronged, and the authority of the federal government was being compromised.
“Roosevelt stood resolute. Unless Cox’s detractors could prove a reason for her dismissal other than the color of her skin, she would remain the Indianola postmistress”. Roosevelt closed Indianola’s post office on January 2, 1903, and rerouted mail to Greenville; Cox continued to receive her salary. That same month, the United States Senate debated the Indianola postal event for four hours, and Cox left Indianola for her own safety and did not return. In February 1904, the post office was reopened, but demoted in rank from third class to fourth class.
In the early and mid-twentieth century a number of Blues musicians originated in the area, including B.B. King, who worked in the local cotton industry in Indianola in the 1940s before pursuing a professional musical career.
In July 1954, two months after the Supreme Court of the United States announced its unanimous decision in Brown v. Board of Education, ruling that school segregation was unconstitutional, the local plantation manager Robert B. Patterson met with a group of like-minded individuals in a private home in Indianola to form the White Citizens’ Council. Its goal was to resist any implementation of racial integration in Mississippi.
Parts of the film The Chamber, starring Gene Hackman, were filmed in downtown Indianola. The film was adapted from the John Grisham novel of the same name.
Art students at Gentry High School in Indianola earned a listing in Guinness World Records on June 7, 2003, by creating the world’s largest comic strip in their school parking lot. The giant Lucky Cow comic strip was big enough to cover 35 school buses, measuring 135 ft. wide and 47.8 ft. high.
The Indianola Historic District was added to the National Register of Historic Places in 2009.
– Historical information compiled by Wikipedia.