History of Batesville
The Land upon which present day Batesville is situated originally belonged to a Chickasaw Indian called Ish-Sho-Nu-Nah. It was part of the Chickasaw cession to the Federal Government, which in turn vested title to over2,000 acres of land to Ish-Sho-Nu-Nah by the treaty of Pontotoc Creek in 1832. 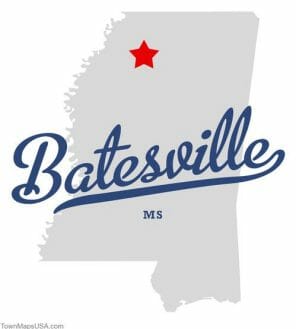 In early days, the town of Batesville was a secondary frontier community, lacking the river location of Panola and Belmont, the two leading towns of that day in North Mississippi. Old Panola, as it is now called, was located about one mile northwest of the present site of Batesville, and was a bitter rival of Belmont for the location of the county seat in 1864.
An accusation was made by the citizens of Belmont that Panola used bribery in obtaining designation as the county seat of Panola County. In those days, Panola was the dominating scene of the south side of the Little Tallahatchie River, and Belmont reigned supreme on the north. This rivalry is still carried on in a friendly way between Batesville and Sardis.
The beginning of the end for Old Panola and Belmont, and the first glimmer of a bright future for Batesville came when the Mississippi and Tennessee Railroad laid tracks from Memphis to Grenada, Mississippi, directly through Batesville. Steamboat traffic, which had made Old Panola and Belmont shipping and transportation centers was being replaced by railroad travel, which meant, of course, that Batesville was replacing the two towns as a business center.
Batesville was named for, Mr. Jim Bates, a conductor on the Mississippi and Tennessee Railroad, and a prominent Methodist minister in the county. (Old newspaper articles mention “Brother Jim Bates” preaching ‘eloquently’ at a hanging.) The town of Batesville received its charter in 1866.
The Illinois Central Railroad brought out the old MT line and extended the tracks to New Orleans. Shortly after this move, the town of Ole Panola began to make a mass movement to Batesville. Leading families of Old Panola moved houses, business establishments and churches to the new center of business and social live. The process of moving was extended by a few old families who chose to remain in Old Panola, but as the buildings deteriorated and some burned, they rebuild in Batesville. In a few short years, the once booming river port had vanished except for the ruins of the buildings. One of the foundations is said to have been a brick two-story jail, the only one in this part of the country at that time, and the pride of the people of Panola County.
Batesville has always been the center of excellent agricultural lands, thriving on the proceeds of farming and livestock raising since it was settled.
Since, the beginning, Batesville has been a ‘natural’ for industrial sites. The first such interest was developed during the early years of the Civil War when a gun foundry was established in Batesville which employed 1 people. A canning plant, established in Batesville shortly after the purchase of the M&T Railroad by the Illinois Central was one of the greater influences on rapid and steady settlement of Batesville. Darnell’s mills, garment manufacturer was located in Batesville in the early 1900’s and remained prosperous until the 1930’s. Foundations of this mill are still standing southeast of the present town.
Panola County is rich in tradition and history of the Civil War. During the early part of 1861, The Weekly Panola Star reported that people were only lukewarm on the subject of war, but were unanimously in favor of the Confederacy and seccession.
Today, with pride in its rich past, and expectation in a brilliant future, Batesville looks confidently to the years to come with the same spirit that made that history so rich and colorful. The same ambition and determination makes Batesville on of the leading towns in North Mississippi, a prosperous trading center which never ceases to strive for growth and accomplishment.
Recreation
Enid Lake
Located just 12 miles south of Batesville, Enid Lake has plentiful picnic pavilions, swimming beaches and campgrounds. Enid Lake is also home to George Payne Cossar State Park which also offers rental cabins, swimming pool, putt-putt golf, visitor’s center and a non-frisby golf course.
Sardis Lake
Located just 10 miles northeast of Batesville, Sardis Lake offers swimming beaches, fishing, campground sites as well as recreational boating and skiing. Sardis Lake is also home to John Kyle State Park which also offers fully furnished cabin accommodations and s lodge is available for family reunions and group gatherings.
For more about Batesville, visit www.cityofbatesvillems.com.