May 20, 2014
2
850
Wal-Mart has a door greeter, but local businesses in Oxford have a pleasant alternative: pets. Off-Square Books, AC’s Bed & Bath, and Ya-Ya’s – to name a few on the Square – have animals who hang out with the staff and customers.
The creaking step into AC’s Bed & Bath reveals a cozy store stocked with nighttime luxuries. It is a pleasant store to browse for pillows, robes, soaps, and more. Then a model bed’s skirt started ruffling, but the front doors aren’t open – it’s not the wind. Suddenly, a small Yorkie waddled out from underneath the bed and upon seeing the customers he rolled over and stretched out his tiny stomach.
“People like to play with him,” Ann Cleary, store owner, said. “He loves their pettings. Sometimes I think people come here just to see him!”
Buddy is a thirteen-year-old Yorkshire Terrier. Cleary has brought him to the store everyday since he was just a small puppy. Buddy works as a sales associate or a model since he demonstrates the bedding’s effectiveness. “He just loves to sleep,” Cleary said as she pointed out his three soft dog beds throughout the store.
Buddy shuffled to the sound of her voice, rolled over, and looked up expectantly. A customer immediately bent down and cooed over him. Everyone in the store chuckled as Buddy cozied up to people and sought out a sun patch to doze in.

Buddy is calm but in the past years he had some teasing from another pet: Mamacita the cat from Off Square Books. Mamacita would appear at AC’s windows to taunt Buddy.
“Buddy couldn’t go outside,” Lisa Howorth, Mamacita’s owner, said. “So, Mamacita would sit outside the windows or the door and tease him and he’d bark at her.”
Mamacita, who has been ‘retired’ from Off Square Books for two years now, knew the Square and its people well. When Off Square Books relocated from where McEwen’s is now to its current location, Mamacita claimed the southern side of Square as her own.
“She would cross the crosswalks like the rest of us,” Slade Lewis of Square Books said. “Sun herself on the steps in front of Neilson’s; taunt Buddy the dog at AC’s through the glass door. I can’t tell you how many times she was ‘returned’ to the store, only to go right back out again.”
“Her adventurous spirit eventually forced her into an early retirement,” Lewis said. “For roaming a little too far from home, and supplementing her diet with scavenged food from the Square’s lovely alleys.”

Mamacita loved to wander to Proud Larrys’ for a bite that often didn’t agree with her stomach. In an attempt to keep Mamacita healthy and happy, Howorth made her a cape that read: ‘Mamacita: return to Off Square – Please Do Not Feed Me!’
“It didn’t deter her from getting fries though,” Howorth said.
Mamacita is now spending her days sunning, loving on the Howorth family, and awaiting her nightly battles with a certain raccoon.
She hinted at planning a possible Mamacita Day for Off Square Books during the interviews. The cat would return to the bookstore and greet her old favorite customers again.
“Ever since Mamacita retired, we have been so surprised by how many people asked about her,” Howorth said. “Everyone loved her, especially all the stores on the Square. She knew all of them and she was loved.”
A short walk north on the Square is another establishment with well-loved mascots: Ya-Ya’s Frozen Yogurt. Its longtime mascot, the white golden retriever named Hampton, has retired to Florida with Bestey Winslow, the store’s owner.
“He was Ya Ya’s first mascot,” Winslow said. “He now lives in Florida with me and drives back and forth to Oxford with me.”

Since Hampton’s retirement, Ya Ya’s adopted a year-and-a-half old Burmese Mountain dog named Bear. He belongs to Kathryn Winslow, Betsey’s daughter.
“When he was about eight months old and I left to work at Ya Ya’s,” Winslow said. “I had some workers at my house, so I told them to keep Bear in my room as they went in and out. I lived point-one mile away from the Square, down east Jackson Ave. An hour later I was at the register, looked out, and Bear was sitting outside the store being fed yogurt by a bunch of little kids!”
She brings Bear to Ya Ya’s a couple nights a week when it isn’t muggy. He enjoys sitting outside and waving his paw at customers for treats and possibly some yogurt. When Hampton was in Oxford, they would greet people walking by or sit with the customers eating yogurt outside together.
Kathryn walked outside with a sample size of yogurt and motioned, “Watch this.”

Bear saw the sample in her hand and immediately tried to give her a hand shake. He ended up standing up and gathering her in a hug as he lapped up the vanilla yogurt happily.
Winslow said, “He really does love the yogurt, and ‘working’ out here as the mascot. He’s a happy dog.”
Down University Avenue is Bette’s Flowers, a longtime local floral shop since 1965. The store is bright with spring fever, pastel decorations and blooming flowers. The store seems quiet, but with a closer look there is something more: Kittus, the resident pet.
“The store has always had a cat,” Amy Knotts, floral arranger, said. “After every cat passes away, we have a new one.”

However, Kittus was a surprise. “We opened the door and there was this tiny tabby kitten – had to be a month old or less. He walked in and lived here ever since,” Knotts said.
Kittus peeked out from under the table. He was careful to leave the table without a noise. He smelled the flowers as if to check their freshness and snuck down the store’s steps.
“We get reactions sometimes,” Knotts said. “We have to go find him for those who want to cuddle him or take him downstairs from those who are afraid of cats.” She chuckled at the thought of Kittus scaring people.

Kittus is a shy cat that likes to nap hidden among the flowers. A lift of a tablecloth or some shifting will reveal the large tabby. He doesn’t mind a few pets if a lucky customer finds him.
Next, just down the street from Bette’s Flowers is the public library, with two special residents.
Laura Beth Walker, the head librarian, said, “Nancy Opalko, the head librarian for over forty years, decided that the library would look better with a pet or two. So she adopted two kittens from the local shelter.”
The cats were small kittens then; just months old, and they were adopted from Oxford Lafayette Humane Society in 2004.

They are 10 years old now. They have lived with the librarians and spent most of their days at the library. One is an orange and white cat named Atticus, the other is a tortoiseshell-colored cat named Scout. Their favorite activity is sleeping in the newspaper archives in the mornings before the library opens. They also love to bat at the building’s decorations, especially during Christmas, according to Walker. Scout loves to hide under blankets in the librarians’ offices where the two cats eat, sleep and play as they work.
“They’re great stress relief for us,” Walker said. “We come to our offices and just pet them.”
Across town from the library, there’s yet another store with some sweet mascots.
“Hollywood Feed is a chain store,” Chance Taylor, a sales associate, said. “It’s all over the South.”
Three dogs snuffled behind him at the check out register. Taylor pointed them out.

“J-J is the chocolate lab and the other two, Abby and Roux, belong to Clint, the store’s manager,” Taylor said. The dogs are slender – a running joke since the store sells pet food and treats.
A customer prepared to check out. Taylor tapped the counter almost absent-mindedly. J-J and Roux stood on their hind legs and looked around at the customers with a look that seemed to say, “Welcome, and let me bag those treats for you!” Taylor rung up a bone and rewarded the dogs.
“It’s kind of a privilege to bring them in,” Taylor said. “I love being able to bring J-J and not have to worry about him while I’m at work. He gets a lot of attention from customers, so that doesn’t hurt either.”
Next, on West Oxford Loop, lies Pam’s Pool & Spa. The store recently started selling something more: pet care merchandise.
“We get customers who come by just to see the dogs,” Pam said. “Sometimes they’ll bring their kids and tell us, ‘Oh we’re just here to pet them! The kids missed them.’”
Pam has two and her employee, James Ready, brings in his dog too every now and then. Pam’s dog Beauregard, a reddish-blonde pup, has a sister, Maggie, who hangs out at Rib Cage at the Square. Pam also brings in a small Russell Terrier named Sweet Pea, who is her neighbor’s dog, so Beauregard won’t be lonely. “Sweet Pea is my neighbor’s dog, but she loves me,” Pam said. “And I love her! My neighbor named my dog Beauregard, so it’s all good.”
Ready’s dogs are named Indiana and Georgia, who weren’t in the store that day, but Pam said that she decided to bring in her dogs because she loved animals and couldn’t bear the thought of them being outside in hot or inclement weather.

“The dogs love being in the office with us,” Ready said. “Beauregard steals seats from people and other dogs. They all fuss over that one chair to the point of sneaking under the chair so they could bump the dog from below.”
Beauregard is friendly to the customers. “He loves the children!” Pam said, “He has a favorite: this little ballerina who comes in all dressed up. He loves her tutu especially.”
Here are some more cute images of Oxford’s best friends: 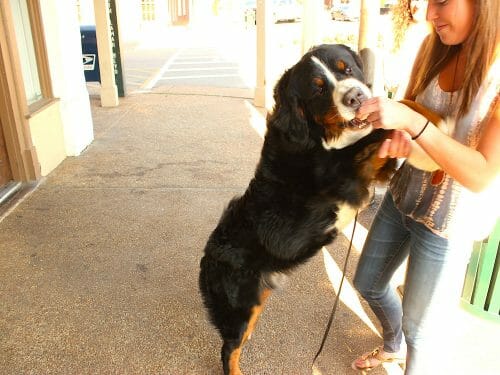 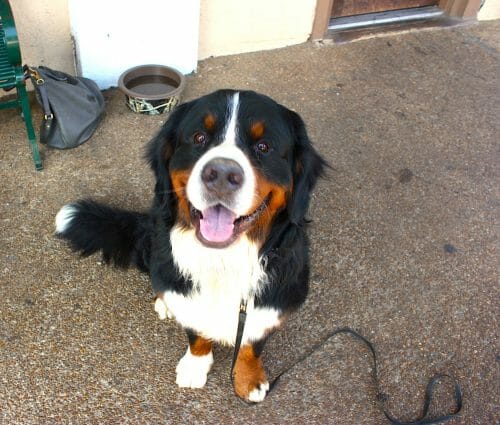 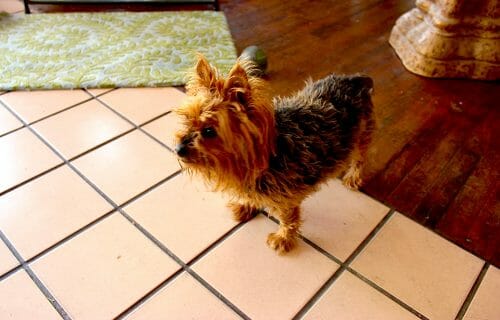 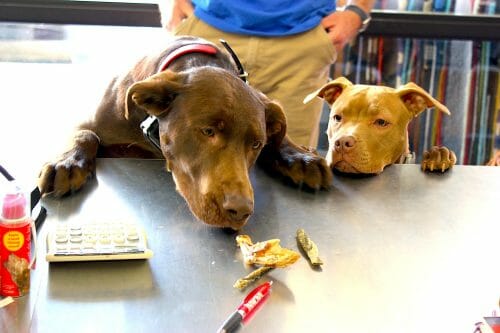 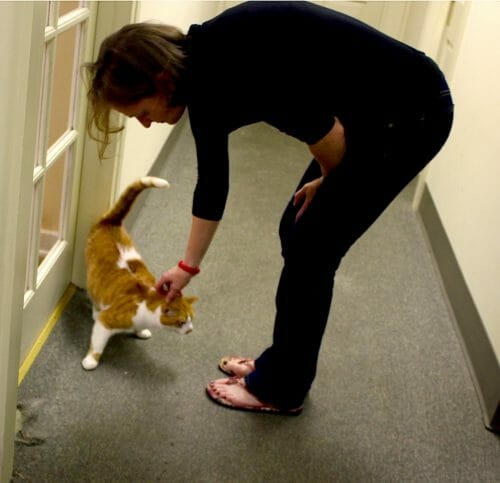