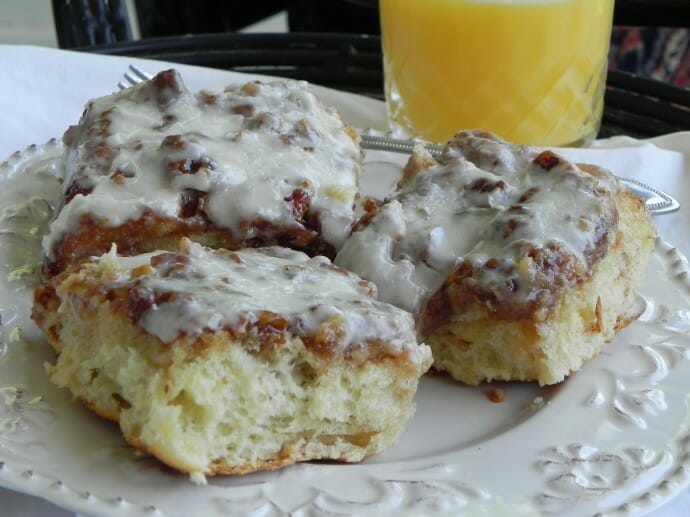 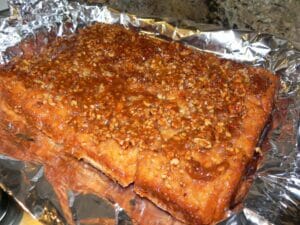 Dissolve yeast in warm water in a small bowl or cup —about 5 minutes. In a large non-reactive bowl (glass, ceramic or stainless), combine dissolved yeast with 1/2 cup of flour, sugar, salt, eggs, milk and vanilla. Mix until completely blended, and stir in remaining (2 c) flour. Mix until dough comes together. It will be very sticky.
Butter your hands and knead for 10 minutes until dough is smooth and elastic.  Work in the soft (not melted) butter until it has been completely blended into the very sticky dough with no remaining butter lumps.  Place the dough into a buttered bowl (I used a 2.5-qt glass bowl). Cover with slightly loose plastic and place in a warm spot to rise until doubled in size, about 1-1/2 hour. Temperature should be about 75-80˚F. (Because my home is air-conditioned, I placed mine on the top railing of stairs to the attic.)
When risen, punch down dough, cover again with plastic, and refrigerate for 30 minutes.
Topping:
1c light brown sugar
8 T (1 stick) salted butter
1/4 c honey
3/4 to 1 c chopped pecans
1 to 2 tsp melted butter
1/3 c light brown sugar
2 tsp ground cinnamon
When dough has been in fridge for 30 minutes, butter a 9-by-13-inch baking pan. Set aside.
Combine 1 c brown sugar with stick of butter, honey and pecans in a medium saucepan. Bring to a rolling boil and immediately remove from heat. Do not continue boiling or it will turn to toffee. Pour syrup mixture into the buttered pan and spread it evenly before it begins to set up. 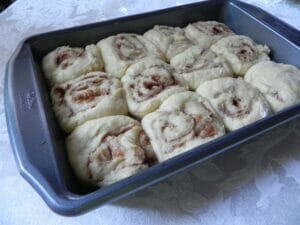 Spread out a large piece of parchment paper and dust with flour. Position the dough in the center, and dust dough with flour to reduce the stickiness. Roll out the dough to a rectangle 12 by 16 inches. (I mark measurements on the parchment.)
Spread the melted butter over the entire dough surface. Combine the 1/3-cup of brown sugar and cinnamon with a fork in small cup. Sprinkle the mixture evenly across the buttered dough, lightly smoothing it to cover entire surface.
Roll the dough into a jelly roll, lengthwise, using the edge of the parchment paper to help. I found I had to sprinkle flour at intervals and use a spatula or pastry blade to release sticky dough and maintain an even roll.
Once rolled, measure off 12 even slices and cut the slices. Position four rows of 3 three slices in the pan on top of the hardened syrup. Don’t worry that the unbaked rolls are not touching each other.
Cover with plastic and allow the dough to rise again at room temperature until all sides are touching in pan. I let mine rise overnight about 7 hours. On a warm day, the rolls will double in size much more quickly.
Preheat oven to 350˚F. Bake rolls on center rack for 20 to 30 minutes, until tops are browned and syrup has begun bubbling up the sides. DO NOT OVERBAKE OR SYRUP LAYER WILL HARDEN.
Remove to a rack to cool for 5 minutes.  Invert still-hot rolls onto a baking sheet or large pan lined with foil to collect dripping syrup. Some of the syrup mixture might remain in baking pan; scrape any still-pliable syrup out and spread on rolls where mixture is thinnest. Do not scrape out darkened or hardened mixture.
Icing on the Topping: 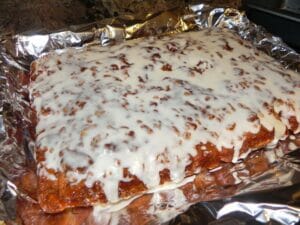 1 c confectioners sugar
2 T melted butter or 3 T hot heavy cream
2 T whole milk
1/2 tsp vanilla extract
Pinch of salt
Splash of rum or coffee, OPTIONAL
Beat the sugar with the milk, vanilla, salt and optional splash of rum or coffee. Mix in the melted butter until smooth, adding additional sugar if using the rum or coffee. The icing will be thin. Drizzle it evenly over top of the cooling rolls. Serve the rolls hot.
RECIPE FOR SAVING FALLEN YEAST DOUGH
If your dough fails to rise after all this effort, it MIGHT be rescued by revitalizing it with a fresh sample of Active Dry Yeast.
For each envelope (or each 2-1/4 tsp) of yeast listed in the recipe, combine in a large warm bowl 1/4 c lukewarm water (100-110˚F), plus 1 tsp white granulated sugar and 2-1/4 tsp of new Active Dry Yeast.
Stir to dissolve and let stand for 10 minutes.
Use an electric mixer and slowly beat small pieces of the unrisen dough (about the size of a walnut) into the proofed yeast . Continue until about half the dough has been added.
Use a mixing spoon to stir in the remaining half of the unrisen dough.
Knead in just enough flour to eliminate stickiness.  Loosely cover with warm cloth or oiled plastic and allow the dough to rise according to recipe directions. Continue with original recipe once the dough has risen.
[box style=”0″]
DO’S AND DON’TS FOR HOW TO USE YEAST
Cake yeast lasts about two weeks. Active dry and the various instant yeasts are good for about a year.
Store unopened yeast in a cool, dry place such as a pantry or refrigerator. Once opened, store in an airtight container in the back of the fridge, away from drafts; use within 3-4 months.
Tap water contains chemicals, primarily chlorine, that may kill your yeast. To make sure your yeast doesn’t die, use only distilled or purified water when activating it. The easiest way to remove chlorine from tap water is to boil the water about 5-10 minutes and allow it to cool.
If using a recipe that does not account for activating the dry yeast with liquid, you may need to decrease other liquid in the recipe by 1/4 cup.
To activate Active Dry Yeast, stir the yeast into appropriate measurements of warm water (100-110˚F). Allow to stand 10 minutes. Bubbles should appear as the liquid expands, indicating the presence of carbon dioxide gas..
Most recipes call for adding a small amount of salt with the flour to slow down the yeast activation.
Kneading the dough creates gluten, trapping tiny CO2 bubbles as the yeast ferments, and stretching to give the bread its springy texture. Active Dry Yeast calls for two risings; the instant yeasts require only one.