In honor of the Baseball Rebel’s upcoming trip to Lafayette, La. for Super Regional play, we thought it was a good idea to learn more about our players’ hometowns! Ole Miss pitcher Christian Trent hails from Madisonville, La., which is located between between Mandeville and Ponchatoula, just 120 miles from Lafayette.
Madisonville is located on the north shore of Lake Pontchartrain and is situated along the banks of the picturesque Tchefuncte River.
Each year one of Louisiana’s largest events, the Wooden Boat Festival, draws thousands of visitors who enjoy the festivities along the river. Madisonville is home to the Lake Pontchartrain Basin Maritime Museum, Fairview State Park, and other points of interest. The abundance of marinas, waterfront condominiums, and desirable residential areas make this area a favorite for living and a prime holiday location.

Founded in 1817, Madisonville is one of the oldest communities in Louisiana and is the oldest permanent settlement in St. Tammany Parish.
The population of Madisonville is more than 800 residents on the west bank of the Tchefuncte River, about two miles north of Lake Pontchartrain. The Tchefuncte River’s name is derived from the Choctaw word “Hachofakti“, meaning chinquapin, which is a small oak tree.
The current location of Madisonville came to be when the Spanish occupied the Florida Parishes. The earliest known settler was Juan Baham and his sons, who came from Mobile, AL.
In the early days, it was the site of a Tangipahoa Indian village. The first French settlers called it Coquille because of the abundance of seashells. In 1817, upon incorporation, it was renamed Madisonville in honor of President James Madison, the fourth President of the United States. He is best known as the ‘Father of the Constitution’, based on his tireless efforts at the Constitutional Convention in Philadelphia in 1787 and for drafting the Bill of Rights. 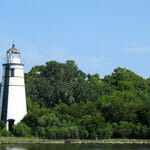 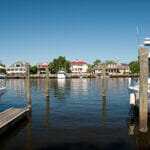 Riverfront
A popular weekend stop for families of all ages to admire the boats visiting the area or the river meandering slowly along, the riverfront has long been a hub of activity, important since before the Civil War. The riverfront is the used for functions throughout the year such as the Wooden Boat Festival, Cruisin’ on the River Car Show, Acoustic String Jam, Dragon Boat Festival, and various boat parades.

Lake Pontchartrain Basin Maritime Museum
Located on the banks of the scenic Tchefuncte River in Madisonville, the Lake Pontchartrain Basin Maritime Museum takes you on a historic journey through maritime Louisiana.The museum brings Louisiana’s maritime history to life through unique interpretive programs, exhibits, and publications. These programs include the time honored craft of boat building, hands-on field trips, constructing underwater robots, lighthouse overnights, and other exciting educational opportunities for people of all ages. 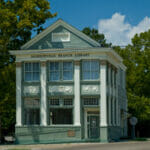 Madisonville Branch Library (Currently Undergoing Renovations)
The building that served as the Madisonville Branch Library until damaged by Hurricane Katrina, also served as a hospital and bank in prior years. Due to the damage it received, it is currently being renovated and its future function has not yet been determined. The site is on the National Registry of Historic Places and it has had an illustrious career since the turn of the century as first a two story saloon, then as a bank, a hospital, and again as a bank. After restoration in 1987, the building was dedicated as the “Patricia Chatellier Pelloat Memorial Library.”