Learning from the Ultimate Team and their Remarkable Leader

Teamwork.
It is one of the most important topics in motivation and in success for companies and all organizations.
Whether you follow sports or not, it can be very helpful to know the story of the San Antonio Spurs in basketball and how total commitment to team has led them to remarkable success. Over the past 15 years the Spurs have had more success than any organization in the big four professional sports leagues (NFL, NBA, NHL, Major League Baseball). They have won 70% of their games and four championships. This week they go for another as they face the Miami Heat in the NBA Finals.
It is because they are totally committed to the power of team and to each other. The way they pass and share the basketball is a thing of beauty.
When you look at the culture of their organization, you see remarkable diversity. Nine of their 15 players are from outside of the U.S. Their star guard Tony Parker is from France. Their star big man Tim Duncan was raised in the U.S. Virgin Islands. Their third best player, Manu Ginobili is from Argentina. They have players from Italy, Brazil, Canada and Australia. So many different colors of skin and cultural backgrounds, all coming together as one.
The reason why they have so many international players is that their coach, Gregg Popovich, brutally feels international players work harder than young people in the U.S. and they don’t have the entitlement issues many young people in the U.S. have developed in recent years.
The Spurs’ superstar Tim Duncan doesn’t act like one at all. The 6’11” Duncan played at Wake Forest where he graduated with honors with a degree in psychology. In college, Duncan co-authored a chapter in the social psychology book Aversive Interpersonal Behaviors.
How he became one of the ten best basketball players in the world is fascinating. Growing up in the Virgin Islands, his dream was to be an Olympic swimmer. At one point he was the top U.S. competitor in his age group in the 400 meter freestyle. When Hurricane Hugo destroyed the only Olympic-sized pool, that forced him to have to swim in the ocean where his fear of sharks took the wind out of his love of swimming.
A day before he turned 14 his mother died from breast cancer. On her deathbed she made him promise he would get a college degree. A basketball didn’t reach his hands until 9th grade but his relentless work ethic and growth to 6’11” led to a scholarship to play for prestigious Wake Forest. When the NBA tried to get him to leave before graduating, he refused. He finished all four years to fulfill his mother’s wishes.
Duncan says she is his main inspiration. Among other things, she taught him and his sisters this nursery rhyme “Good, Better, Best. Never let it rest / Until your Good is Better, and your Better is your Best,” which he adopted as his personal motto. 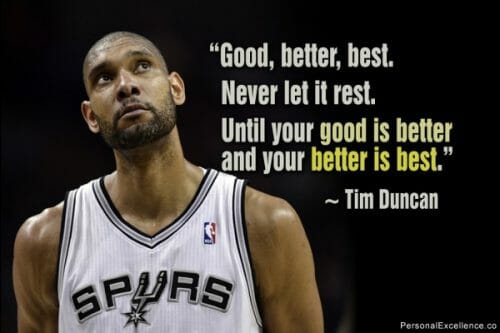 Using that motto, he has practiced his bank shot tens and tens of thousands of time, and is deadly accurate with his shots. On and off the court, he believes that the three most important values are dedication, teamwork and camaraderie.
Their leader, coach Gregg Popovich, majored in Soviet studies at the Air Force Academy and came very close to going after a career in the C.I.A. He speaks Russian and Serbian and is a wine connoisseur with a 3,000-plus bottle cellar. His time at the Air Force Academy played a huge role in how he has developed such a team concept. At the Academy they take them there and break them down and mold them into people who believe it’s not about the individual, but the group. 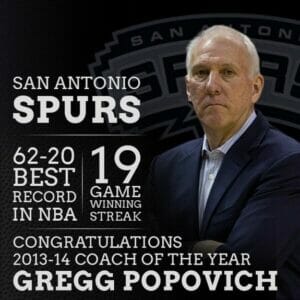 As a leader, Popovich clearly states what is expected from everyone and can be very demanding. He shared his feelings on leadership in an article in Sports Illustrated last year. This could apply for any organization in any line of work:
“Yes, we’re disciplined with what we do. But that’s not enough. Relationships with people are what it’s all about. You have to make players realize you care about them. And they have to care about each other and be interested in each other. Then they start to feel a responsibility toward each other. Then they want to do for each other.
“And I have always thought it helps if you can make it fun, and one of the ways you do that is let them think you’re a little crazy, that you’re interested in things outside of basketball. ‘Are there weapons of mass destruction? Or aren’t there? What, don’t you read the papers?’ You have to give the message that the world is wider than a basketball court.”
Tony Fuller is a friend of mine. He is a videographer and editor at the University of Notre Dame. Though he lives far from San Antonio he is a passionate fan of the Spurs. I asked him why.
“Charlie, I love the Spurs because they quietly go about their business and they put team first and individual accolades second. Each player knows their role and knows what is expected of them. That’s what I’ve appreciated as a fan. They’ve been able to maintain a high level of consistency, be a model franchise for all of professional sports, yet they do not seek out attention or wish to be in the spotlight. Everyone buys into the system and can operate like a well-oiled machine. From Tim Duncan to the last man on the roster, Coach Pop treats everyone the same and expects everyone to perform to the best of their abilities.”

Tony told me of a beautiful new video that shows the remarkable teamwork of the Spurs. Narrated in part by Magic Johnson, the way they pass the ball to each other is a sight to behold.

True Teamwork, as shown by the San Antonio Spurs

“San Antonio runs their offense perfectly. It is like listening to Mozart. It’s just ridiculous how they play.” – Marcin Gortat, Washington Wizards player