Last week I wrote about how the Oxford Pilgrimage started and lasted for twenty-two years. Now I want to tell you what got visitors to Oxford to keep coming back. There were many cultural and artistic events held in conjunction with the pilgrimage. These events took a great deal of planning and time. Also the make-up of the homes open to the visitors changed from year to year. A total of twenty homes were open over the years for the pilgrimage visitors. This also allowed the attendees to have a reason to keep coming back.
One of the most interesting and attended events, other than the tour of the homes at the first pilgrimage, was a plantation-type barbecue held at Jimmy and Nan Faulkner’s home, Cedar Hill Farm. The barbecue was a major undertaking that took at great deal of planning, cooks, and workers to carry out. The reason that it took so many to carry-off the event was that 2,500 chicken halves were to be barbecued.
Local Assistant County Agent, Alton Reid, was the man of the hour that made the event successful. There were twenty-two cooks since the cooking required one cook for each 100 chicken-halves. There were three serving lines that required six people to staff each line. There were others that were need to help bring in supplies, and it was estimated that it took over sixty people to man the plantation-type barbecue.
The cafeteria at the university supplied thirty gallons of Cole slaw and eighty gallons of potato salad. They also supplied apple pies for desert that kept the cafeteria employees cooking for over three days. But the main item, the plantation barbecue sauce, was something that took a great deal of knowledge to prepare. The old-fashioned sauce required forty gallons of pure apple cider vinegar, twenty gallons of Wesson oil, twenty bottles of Tabasco sauce, eighty tablespoons of red pepper with the same amount of garlic salt and a few extras that are always needed to finish the sauce.
Later during the period of the Oxford Pilgrimage, the barbecue was moved to the lawn of the Courthouse and it was not as much of a project that it had been while housed at Cedar Hill Farm. The old plantation barbecue was held before the Memphis in May Barbecue Contest was conceived. If Reid and his helpers had been around when the contest was started there is no doubt that he would have won first place.
Another one of the events that was added to the tour of homes was the opening of Colonel J. R. Cofield’s studio. He was the official photographer of William Faulkner. Visitors were invited to see hundreds of his photographs of the “greats” of Oxford and Ole Miss. The photographs spanned a period of forty years and covered his collection of Faulkner pictures, his All-American football heroes, and special studies of the first two Mississippi Miss America.
At one time a ballet was preformed at Cedar Oaks entitled a “Southern Rhapsody”. At the same venue a local Girl Scout Troop, Troop 163, preformed an original play that was reminiscence of Christmas before the Civil War. The girls of the scout troop were in period costume. According to Mary Alice Tate, one of the founders of the pilgrimage, the materials for the play were factual and it was an instance that actually happened in Oxford. The girls wrote difference scripts for the play and Alma Stead took the scripts and wrote a final edition of the Play. Nancy Wright was the director and the girls of the troop were the actors.
“The children portrayed in the play were the children of Dr. Robert Carter, who was at the time the event happened, a surgeon in the Confederate Army,” stated Tate. “What happened was that the Carter children were sitting around their house discussing that it was like before the War. The outcome was that the family had ham for Christmas dinner and thwarted the Yankee soldiers who had come in search of food.” Robert Corbin, the son of Dr. Carter, who was one of the children who saved the family’s ham from the Yankees, related the true incident upon which the play was based to Tate. The actual heroine of the story was a little slave girl by the name of Susie.
Other events during the run of the pilgrimage were an antique car show, a band concert, an art show, the Yoknapatawpha Run, and a reenactment of a Civil War camp on the ground of Cedar Oaks. All of these events and the changing and addition of other homes to the pilgrimage, kept visitors coming back to the pilgrimage for twenty-two years.
Next week, Oxford’s Olden Days will start a series of articles on the homes that all became part of the Oxford Pilgrimage. 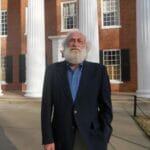 Jack Lamar Mayfield is a fifth generation Oxonian, whose family came to Oxford shortly after the Chickasaw Cession of 1832, and he is the third generation of his family to graduate from the University of Mississippi. He is a former insurance company executive and history instructor at Marshall Academy in Holly Springs, South Panola High School in Batesvile and the Oxford campus of Northwest Community College.
In addition to his weekly blog in HottyToddy.com Oxford’s Olden Days, Mayfield is also the author of an Images of America series book titled Oxford and Ole Miss published in 2008 for the Oxford-Lafayette County Heritage Foundation. The Foundation is responsible for restoring the post-Civil War home of famed Mississippi statesman, L.Q.C. Lamar and is now restoring the Burns Belfry, the first African American Church in Oxford.