Americans depend on newsstands. While that might seem like a ridiculous statement considering the number of establishments that are threatening to close or already have; it’s nonetheless true. Nowhere is the social impact of magazines developed and realized more thoroughly than on the newsstands. 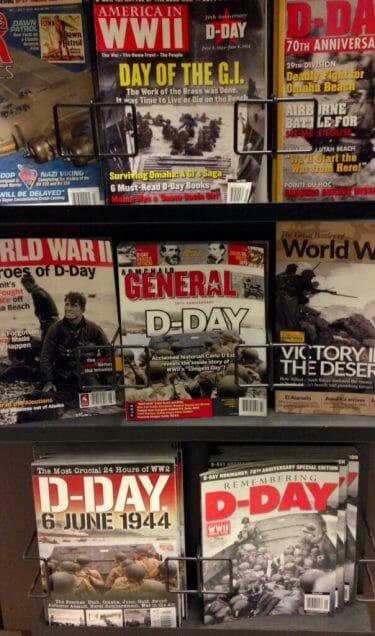 And while yes, for the majority of ink on paper publications the newsstands only represent 10% of their revenues, newsstands have never proven themselves to be more essential and more important than they are right now in the scheme of all print media, even in this digital age.
Why are they so important? Because of one fact that not even the most staunch digital supporter can deny: they’re in-your-face bold and they never apologize for their intrusiveness. Nor should they.
You’re at the newsstands, walking slowly and perusing some of your favorite titles. Suddenly, you see a cover that fairly leaps from its spot on the stand and almost attacks you with its social importance and vibrancy. D-Day: a 70th Anniversary issue that quickly brings the World War II battle to the forefront of your mind. Nothing can pierce that moment in time between you and that magazine cover, nothing. Not the people chattering around you in the background, nor the sounds of cars honking as they go by. It’s just you and that infinite juncture in time where your gaze and your mind connected with a magazine cover that caused a reaction no news broadcast or digital pop-up notification ever could.
It doesn’t matter if you’re in California, Mississippi or Colorado; when you walk into your local Wal-Mart or grocery store and see all the special niche publications on D-Day or whatever event or happening is important to the American Canvas when it comes to that particular time, the newsstands help you to remember that epoch without you even trying. No Google, no Yahoo Search can ever compare to the in-your-face response a magazine cover can generate without even leaving its slot on the stand.
Newsstands are also a great barometer for the demographics and psychographics of any given neighborhood or community. Nowhere else on earth can the inhabitants and their beliefs, practices and habitual ideals be more prominently displayed than in the contents of neighborhood newsstands. It’s a given that what the people of the area like and want will be on display there and the measurements of those details duly noted.
So the next time someone asks you why are newsstands still an important part of the media world; maybe you can just say that when it comes to the fabric of our American canvas, newsstands keep it stitched together with the taut strings of relevance and impact.
Long live the newsstand!

Samir A. Husni is a professor with the Meek School of Journalism and New media. He is “the country’s leading magazine expert,” according to Forbes ASAP magazine; “the nation’s leading authority on new magazines,” according to min:media industry newsletter; and “a world-renowned expert on print journalism,” according to “CBS News Sunday Morning.” The Chicago Tribune dubbed him “the planet’s leading expert on new magazines.” Husni holds a doctorate in journalism from the University of Missouri-Columbia and a master’s degree in journalism from the University of North Texas.