Exchange Club Family Center for the Prevention of Child Abuse

A 15-minute drive from the Square reveals one of Oxford’s most actively involved local nonprofit: Exchange Club Family Center. A sign in the front lobby reads: “We work for the day child abuse no longer exists.”
Late Dr. Ed North, a Jackson physician, who saw to Exchange Club adopting child abuse prevention as its national project, founded the organization. Its mission is to break the cycle of child abuse and neglect through prevention, intervention, and educational services. The Exchange Club teaches replacement of abusive behavior with responsible skills for parents and teenagers. Fred Johnson is its current director. 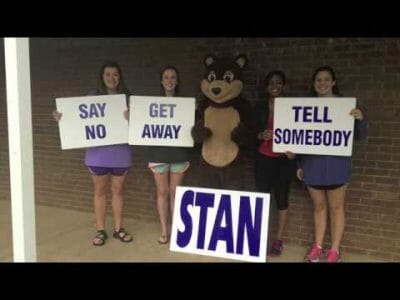 “I began working with Exchange Club one summer. I saw that I could make a difference so I kept working since,” Johnson said.
The Exchange Club has seven programs, and an average of 20 to 25 classes per year. It serves 39 counties in Mississippi and the programs are angled toward prevention and education for the well being of young people.
Adolescent Opportunity Program (AOP) is in operation in Marshall and Panola counties and provides intervention services for juvenile offenders between 12 and 18 years who are at high risk of involvement with criminal lifestyle. The program meets four days a week and provides individual and family counseling, life skills classes, anger management, and alcohol and drug education.
To Love a Child program (TLC) is a long-term, in-home visitation program for first-time teen mothers who receive little to no prenatal care or lack effective parenting knowledge. The program has 16 classes led by licensed professional staff and supervised volunteers. They are responsible for supporting the young mothers from the fifth month of pregnancy through the first six months of the infant’s life. The young mothers are provided with help at home and at the Exchange Center.
Correcting Our Past and Establishing Skills (COPES) is a research-based, mixed media prevention program. It is designed to reduce risk factors that have been correlated with drug use. It has three components: giving students current and correct information, teaching social skills, and providing opportunities for students to bond with their loved ones and peers. It presently operates in Lafayette, Calhoun, Lowndes and Chickasaw counties.
“COPES services 150 kids and families per year,” Johnson said. “It is a last-chance program for some because they are court-ordered to attend.”


The Stop Child Abuse and Neglect (SCAN) program is a puppet and video-based prevention program for school-aged children. It was developed to protect the children and teach them how to escape from and to disclose abuses to appropriate individuals.
“We have Stan the Bear. He teaches three things to children. One is ‘say no.’ The second is ‘get away.’ If the child has a reason to say no then the child has a reason to get away, and they have to because some will try to turn that ‘no’ into a ‘yes,’” Johnson said. “The third is ‘tell someone.’ I want children to talk more about abuse and be able to tell a police officer, a teacher, or even a friend.”
“Stan sings a song,” Johnson said, then played from his laptop. “We’ll have three people up on stage that will act out these three things. We have flashcards up there. The children really like to sing along to this song so I think they’ll be likely to remember these words.”
Exchange Club Family Center reaches out to Oxford, not only to help, but to celebrate goodwill.
“It has four areas of its community outreach,” Margaret King, secretary of Exchange for past 13 years and its once president. “Americanism, youth, community service, and family center.”
For its Americanism area, the organization assists veterans in Oxford. “We take around 150 gifts to Veteran’s Home every Christmas,” King said. The children also learn to respect and hang the American flag.
The youth component is celebrated with recognition of local teens’ achievements. From October through March, Exchange Club honors seniors from Oxford and Lafayette High Schools.
“They are honored with a lunch and a gift certificate,” King said. “We usually get three each from each high school total. We recognize high grade point average – 4.5 for some – and the high school counselors recommend them to us.”
The Exchange Club also rewards teens with scholarships. It hands out two $500 scholarships to assist with college tuition.
“We reward teens who are B or A/B average,” King said. “We want to help those who aren’t as likely to get scholarships a straight – A’s student can get. We recognize citizenship as well as their GPA in selecting who to give our scholarships too.”
This year there was an exception.
“Oxford High School never got back to us this year about nominating a student for the scholarship,” King said. “So we decided to give the $500 to Tupelo for tornado relief. We were glad to help with recovery, although the organization is focused on Oxford.”
The third component is community service, according to King. Every month, the Exchange Club honors a police officer in Oxford with a lunch and a plaque. “We let the officer bring along whoever nominated him or her for this honor,” King said.
They also assisted OPD by donating a portion of money toward purchasing a dog trained to detect drugs and dangerous objects through scent.
“We try to help what we can,” King said. “We want to help the children and reward those who do well.”
The fourth component of community outreach is fundraising. They achieve some of the fundraising through parking cars for Ole Miss football season. “We make around two to three thousand dollars parking cars for the attendees,” King said.
They also benefit from pledges from Chambers of Commerce and United Way of Oxford.
Katherine Drinkwater, assistant director of United Way, said: “The United Way of Oxford and Lafayette County’s community investment committee and board of directors have awarded the Exchange Club with a grant for their work within our community. They are a partner organization since 1999.”
“Although United Way doesn’t do any fundraising events, we were very happy to have the Exchange Club’s STAN the Bear at the inaugural EXCELebration last summer,” Drinkwater added.
The Exchange Club is hosting a fundraiser on June 16, the First Annual Terrance Metcalf Golf & Crawfish Bash at the Country Club of Oxford.
“The reason it’s named after Terrance Metcalf, a Chicago Bears player, is because I want to start a new program: football camp” Johnson said. “I want the children to meet professional athletes and Ole Miss football players. Talking with them may help kids realize that everyone is flawed too, and there are better outlets. They will also learn team support and importance of hard work and community.”
The tickets are available at the Exchange Club. For more information about the Exchange Club and/or the golf Tournament, check out the Exchange Club website here: www.nmexchangeclub.com. The Exchange Club Family Center is located at 106 Skyline Drive in Oxford. They can be reached by calling 662-234-4255.
– Callie Daniels, staff writer, HottyToddy.com, cadanie2@go.olemiss.edu
Facebook
Twitter
Pinterest
Previous article
VIDEO: Transformer Catches Fire During Storm
Next article
The VA Bureaucracy on Trial