Rebels Even Series With 5-2 Win Over Ragin' Cajuns

June 9, 2014
0
472
It was a tremendous pitcher’s duel throughout with both pitchers turning in quality starts, but the Rebels broke through late with a solo home run from Preston Overbey and a three-run eighth inning as No. 6 Ole Miss (45-19) defeated No. 1 Louisiana-Lafayette (58-9)m by a score of 5-2 Sunday.
The win kept the Rebels alive in the NCAA Super Regional play and set up a decisive game three on Monday with a ticket to the College World Series on the line. First pitch for game three of the series is set for 6 p.m. CT on ESPN2.
Aaron Greenwood (3-1) picked up the win in relief, working the final 2.0 innings, allowing one run on two hits with a walk and two strikeouts. Christian Trent worked 7.0 innings in the start, allowing one unearned run on four hits with a pair of walks and seven strikeouts.
Carson Baranik (11-2) suffered the loss for the Ragin’ Cajuns, allowing three runs on six hits with four walks and four strikeouts through 7.0 innings of work.
“I’m proud of our response after a tough night last night,” said Ole Miss head coach Mike Bianco. “We played well today against a very good Louisiana-Lafayette team. It comes down to pitching and we really needed the lift we got from Christian (Trent) tonight with him going deep into the game and keeping us in it. Then we got the big hits with the home run from (Preston) Overbey and Colby Bortles off the bench.”
For the second consecutive night the Rebels got on the board first, this time off a double to right from Will Allen. Austin Anderson drew a walk on four pitches to reach with two outs and bring Allen to the plate. The senior catcher then drove a ball down the right field line to score Anderson from first and give the Rebels a 1-0 lead.
ULL tied the game in the fifth with a two-out rally, capitalizing on a pair of errors to even the score at 1-1. Seth Harrison hit a ground ball to second, but a bobble on the field and a low throw allowed Harrison to reach. Dylan Butler then laced a double to left and the Ragin’ Cajuns sent Harrison home on the play from first. The relay in from left was in time, but a collision at the plate caused the ball to pop loose for the second error of the inning as Harrison scored. Ole Miss would then get out of the inning with a fly out to right, but the game was knotted at one.
Overbey then put the Rebels back in the lead in the seventh, taking a 1-2 pitch and driving it over the wall in left field for his fourth home run of the season to put Ole Miss on top 2-1.
With the one-run lead after the seventh, the Rebels turned to the bullpen for Greenwood in relief to open the eighth.
A leadoff walk of Michael Strentz put a man on base before a sac bunt and a strikeout put two away. Blake Trahan then drove a ball back through the right side to bring Strentz home from second and tie the game at 2-2 before the Rebels would get out of the inning.
Bousfield opened the home half of the eighth with a leadoff single to left and sent the Ragin’ Cajuns to the bullpen for left-hander Ryan Wilson.
Anderson drew a full-count walk to reach before Will Allen drove a fly ball deep to right center field. The ULL center fielder dropped the ball, allowing Allen to reach safely and Bousfield to scramble home to put the Rebels back on top 3-2.
Ole Miss wasn’t done, however, as Sikes Orvis then singled to right field to load the bases. The Rebels sent pinch hitter Colby Bortles to the plate and the freshman drove the ball back up the middle, scoring both Anderson and Allen to give Ole Miss a 5-2 lead before the Ragin’ Cajuns would get out of the inning.
Louisiana-Lafayette looked to answer in the ninth, using a leadoff double and a groundout to get a runner in an attempt to mount an answering rally. Greenwood and the Rebels stranded the man at third, grabbing the win and forcing a deciding game on Monday. 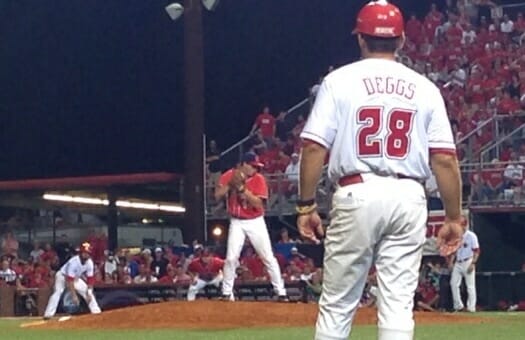 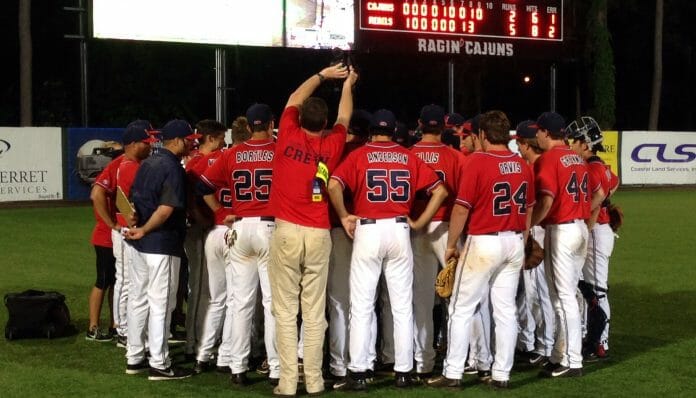