Paintings to Inspire You, Plus a Life Changing Message from Jim Carrey

On Sunday night I was asked to provide narration for a community choir event where I live. Afterwards I came across an inspiring picture of a man I never knew of, and when I googled could find no mention of at all. 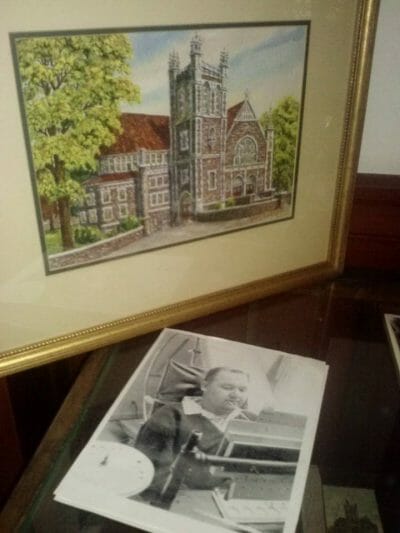 Yet his story is so inspiring.
A lady at St. Paul’s Memorial Church, whose cornerstone was laid in 1901, took me to the side and showed me this painting (above) and picture of the man that did the painting. My first reaction was that it was quite good. I took the picture above of it and then she then told me the story behind it.
Vernon Clark developed a passion for painting at an early age. The son of a painter and decorator, he learned at an early age the technique of blending colors to get the various hues of a painting.
He became especially good at painting different types of architecture from the medieval to early American in the contemporary. Years later, in July of 1962 and married and with children, he was working on a scaffold. It collapsed, causing him to fall and break his neck, becoming paralyzed from the waist down.
Coming home after a year and a half in the hospital, his muscles not responding to therapy, there seemed little he could do except to read and watch TV. Then one day in 1965 his neighbor Russell Ridenhour, who at the time was a student of the Famous Artists Studio, read of a young quadriplegic in New York who had learned to paint by holding a brush between his teeth. This seemed like a good challenge to Vernon, so after much trial and error Mr. Ridenour rigged up a combination easel, palette, and brush holder.
With this outfit Vernon was able to do his own sketching, adjust the painting on the easel and mix his own paint with little help after it once set up. Once finished he would have Mr. Ridenhour send it to the Art Center where it would be critiqued and he would then look to be better the next time.
It was constant encouragement from his wife and four children and the local watercolor society that helped him greatly. Over time his work became so good that he won an Outstanding Watercolor award at the 25th annual held by the Arts Patron Association in the late 1960’s as well as Art Festivals.
While Vernon has passed on, others continue to stoke the fire within and do remarkable things as well.
Ron Heagy (photo below) broke his neck in a surfing accident the day before his 18th birthday. He chose to Never Give Up. After earning a masters degree by typing with a stick in his teeth, he is am now an inspirational speaker, mouth painter, author, husband, father, and founder of a special needs camp located in Oregon.
It is so hard for Ron to paint that he cannot even reach the top of the canvas. What he does is invert the painting and completes the top half upside down. My goodness. Here is one of his paintings… 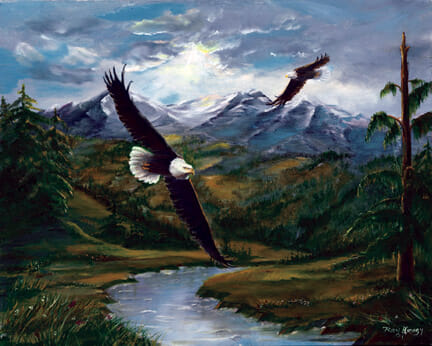 He says we were all born with a purpose and that his is to inspire others.
He was paralyzed when the surf slammed him into the bottom. Not wanting to live, he was in the hospital one night after family had left. He cried out for God to take him when all of the sudden Ron heard his roommate, an 8-year-old boy named Jimmy calling out to him. Jimmy was there with severe injuries and had not said a word since he had been there.
“Ron,” he struggled to say, “I love you.”
It was at that point that Ron took dead aim on what now is a business called Life Is An Attitude. His approach is that if you believe in God, yourself and others you can do anything.

A serious life changing message from a very funny man
Jim Carrey nails it with this short, but powerful, message to graduates
This one minute video is from actor/comedian Jim Carrey’s commencement address to Maharishi University of Management’s class of 2014 in Fairfield, Iowa.
He talks about his father, and how he inspired him to follow his dreams.
I saw this for the first time last night and was blown away by the sincerity of his words. Such a simple, yet powerful video, and it took him just one minute to get it across.