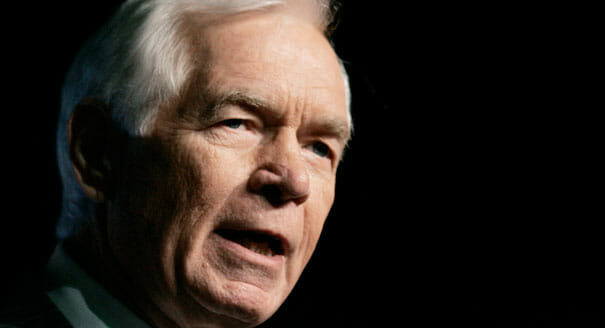 This editorial is courtesy of DJournal.com.

As a businessman, lifelong Mississippian and member of the Board of Trustees of State Institutions of Higher Learning for many years, I was dismayed when I read state Sen. Chris McDaniel’s assertion that, because the word “education” is not in the Constitution, it is unconstitutional to spend federal funds on education, federal funds should be eliminated and Mississippi could manage without them. By this twisted logic, the Federal Aviation Administration and national parks are unconstitutional also.

For every dollar that Mississippians send to the federal government, our state receives $3.15 in federal funds that are used to help improve the quality of life for all Mississippians through education, research, transportation and healthcare. Without these funds and the programs they support, Mississippi would suffer greatly.

As a member of the College Board, I am particularly aware that if McDaniel’s position were to become the prevailing way of doing business, then the critical university research that will save and improve lives ends.

• The research conducted at the University of Mississippi Medical Center to find a cure for cancer, diabetes, heart disease, hypertension and pediatric AIDS would end.

• The University of Mississippi research in developing insecticides and repellents to use against mosquitoes and the diseases they transmit would end.

• The research conducted at the University of Southern Mississippi to develop materials to prevent brain injuries would end.

• The research conducted at Mississippi State University that has increased yield for soybeans, cotton, timber and other crops would end.

• The research that Alcorn State University has conducted to prevent soil erosion and climate change would end.

• The research conducted at the University of Southern Mississippi to study the Gulf of Mexico to facilitate sustainable use of the Gulf that provides the food and fuel we all enjoy would end.

If McDaniel’s position were to become the prevailing way of doing business, then Mississippi students would suffer. Many students rely heavily on federal student financial aid to be able to afford college. Parents in Mississippi want their children to have a better life than they did. They recognize that education is key to fulfilling this desire. College graduates are more likely to volunteer, vote and raise healthier and better-educated children. They have better health themselves and are less likely to need government programs. In short, when a Mississippi student graduates from college, we all reap the benefits.

In a word, if McDaniel’s position were to become the prevailing way of doing business, it would be catastrophic for the university system. Some universities would probably not survive. Thousands of jobs could be lost.

It would require an almost $2 billion state tax increase for Mississippi to continue providing educational services that are currently provided to students on all levels, from kindergarten to universities. Both public and private institutions would suffer.

Mississippi’s most pressing problems, low educational attainment, low income, high unemployment and poor health, would increase exponentially if the resources provided to our state from federal funds were cut off. I urge all Mississippians to consider how greatly our quality of life would be impacted if we were to adopt Chris McDaniel’s way of doing business and refuse the opportunities that are provided through federally-funded programs.

Finally, as a bank CEO for 22 years and as a former Chairman of the American Bankers Association, I have had the privilege of working closely with Gov. Phil Bryant and former Gov. Haley Barbour as they have led Mississippi to new levels of achievement in economic development. At every step of the way in every process, Thad Cochran has played a predictably quiet but highly effective role in ensuring the active support and assistance of the federal government. Thad is in line to again become chairman of the Senate Appropriations Committee if the Republicans take the majority. Our neighbors in Alabama are obviously excited at the possibility that their Sen. Shelby will take Thad’s place as chairman if Thad is not in the Senate next year. It makes no sense for us in Mississippi to hand over the leadership role to Alabama when we have to compete with them for economic development prospects.

Furthermore, I saw firsthand as ABA Chairman the many occasions when Thad’s quiet influence played a key role in protecting our community banks from overzealous regulation and legislation. His leadership has never been more valuable or more needed than it is today. We cannot afford to sit idly by and let out-of-state money and television sound bites take the place of true leadership shown by Senator Cochran.

Aubrey Patterson of Tupelo is a recently retired bank chairman and CEO and current president of the state Board of Trustees of Institutions of Higher Learning.